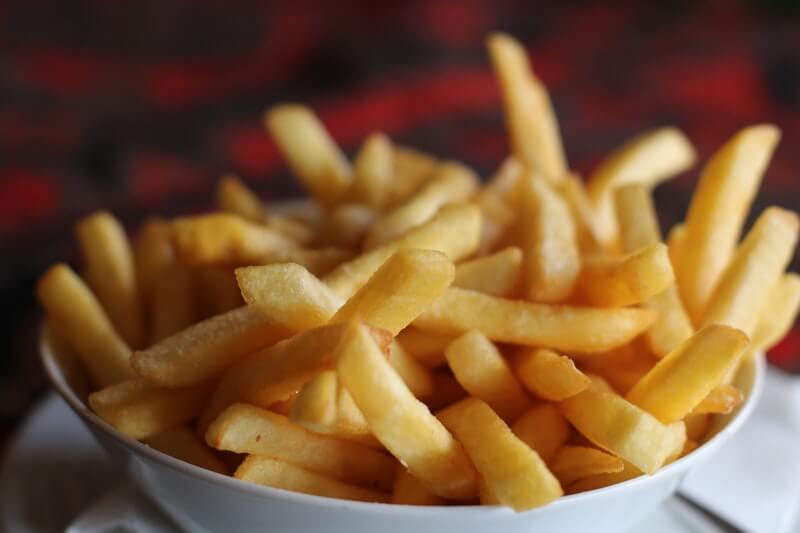 At most places, fries are usually a safe vegan option.

But at fast food restaurants like Burger King and McDonald’s, it doesn’t hurt to double-check.

It turns out that their fries have quite a few ingredients.

Here’s the full list that we need to examine:

Most of those ingredients are clearly vegan. It’s usually safe to assume that xanthan gum is vegan, although in rare cases it’s not.

However, the palm oil might be a problem for you.

However, for many ethical vegans, many vegans don’t eat palm oil. If you’re a brand new vegan and feeling a bit overwhelmed, I wouldn’t worry about it too much.

But if you’d like to learn more about the issues with palm, read that post I linked to and decide if you’re okay with eating palm products.

The ingredients in Burger King fries are all plant-based. However, there is palm oil, which is controversial among vegans.

Burger King Fries Will Be Contaminated With Animal Products

There’s one more issue. According to Burger King itself, the fries are:

Prepared in fryer used for products containing wheat and milk.

Some vegans will be okay with that since you’re not increasing the demand for milk here, but strict vegans may not be okay with it. There’s also a chance to get sick from ingesting milk products if you’re not used to them anymore.

Note that Burger King’s veggie patty isn’t vegan, and neither are Burger King’s onion rings, so it might just be best to avoid Burger King in general for vegans.

Since Burger King cooks fries in the same oil as products with milk in them, there’s a chance that your fries will be contaminated.

Are Any Other Fast Food Fries Vegan?

Want fast food fries without palm oil? As far as I can tell, most people would consider Wendy’s french fries to be vegan.