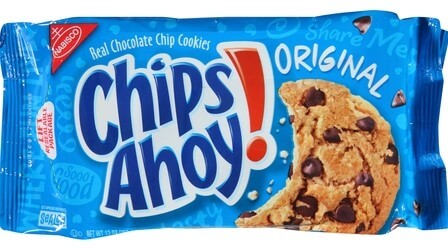 I’ve read on a few blogs that Chips Ahoy are accidentally vegan.

I’m not sure what cookies those authors were looking at because Chips Ahoy most certainly are not vegan. And while there are dozens of varieties, they mostly use the same ingredients.

I looked through several, and none were even close to vegan.

There are some clear issues and some potential issues when you look at the ingredient list for a Chips Ahoy product.

Here’s the list for the standard original ones, note the bolded ingredients:

The milk right away makes it obvious that these are not vegan cookies.

Not all varieties have milk in them, but the ones that don’t have some other milk ingredients like whey in them, so no real difference to vegans.

I highlighted 3 other ingredients that could be issues for vegans. I’ll explain why in case you’re curious, although it doesn’t really matter after the milk:

While those aren’t too relevant at this point, knowing them could be useful in the future.

Verdict: Chips Ahoy! Are Not Vegan

It’s as clear as it can get, since Chips Ahoy cookies have dairy in them, they are not vegan.

The good news is that there are plenty of cookie brands that are vegan friendly if you’re willing to look for them.

Or, learn to make your own cookies from scratch, they’re way better anyways. Here are some vegan chocolate chip brands to get started.