But they may not be vegan.

I say “may” because Frosted Flakes has a few ingredients that strict vegans avoid, but some vegans are okay with.

I’ll lay out the arguments for and against them, and you’ll have to decide for yourself. 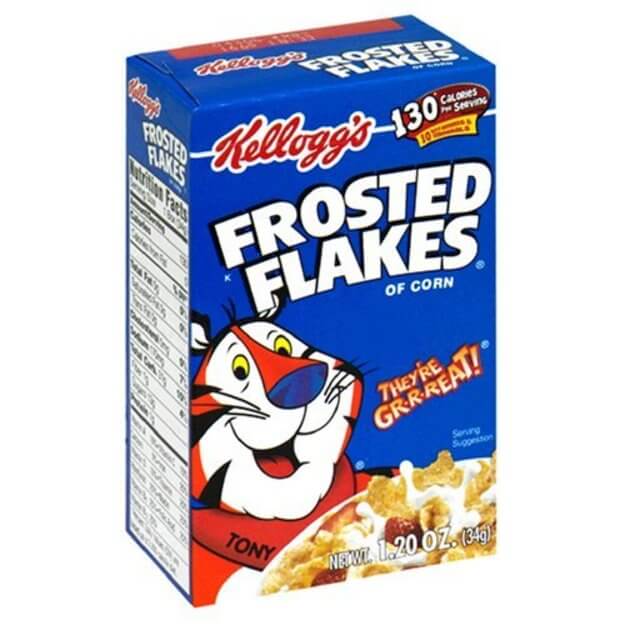 For the most part, the ingredients look okay.

But I highlighted 2 ingredients that vegans should pay attention to.

Most vitamins added to foods like cereal are synthetic and vegan, but vitamin D3 is the exception.

I wrote a more detailed post to why vitamin D3 isn’t vegan, but the gist of it is that the easiest source to get it is from lanolin (the grease from sheep’s wool).

This is not vegan, and it’s why Frosted Flakes are technically not vegan.

But some vegans are still okay with eating them. Why?

That’s because there’s literally only micrograms of the D3 added, you probably couldn’t visibly see that amount even if you tried. Some vegans feel it’s unreasonable to avoid such a small amount, but it’s up to you if you’d like to make an exception here.

The vitamin D3 in Frosted Flakes isn’t vegan, but there’s an incredibly small amount, so some vegans are still okay with it. Decide for yourself.

So let’s say you’re okay with the vitamin D3 here, that leaves us with the sugar.

White sugar in North America is often filtered with bone char to make it as white as possible. This sugar is not vegan.

So when you see “sugar” on a product that was made in North America, you don’t know whether or not it’s vegan. It might be, but it might not.

With large companies like Kellogg’s, I tend to assume it’s not vegan, as they usually have multiple sugar suppliers, and there’s a good chance that at least one uses bone char.

They’re close, but the vitamin D alone makes them not vegan-friendly.

However, everyone has their own personal definition of veganism, and some vegans do think it’s unreasonable to avoid the vitamin D or sugar in this case.

Ultimately, you need to remember that there’s not a single definition of veganism that everyone agrees on.

Sure, there are the obvious things, but there are many gray areas like these that you’ll need to decide on yourself in a way that you can feel good about your choices.