Long story short – The Original Miss Vickie’s flavor appears to be the only vegan flavor.

Note that I looked at the 6 main flavors, but there are some less common varieties that you see from time to time that may or may not be vegan as well.

If you’d like to know the non-vegan ingredients in the other flavors, read on. 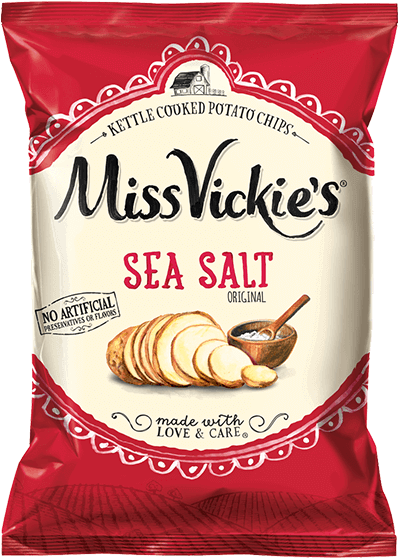 The original flavor of Miss Vickie’s has a very short ingredient list:

All of those are clearly vegan ingredients, so the Original Miss Vickie’s are vegan.

Are Other Flavors of Miss Vickie’s Vegan?

Unfortunately, the ingredient list grows quite a bit larger for every other flavor of Miss Vickie’s, and they all include at least one non-vegan ingredient.

For example, here’s the ingredient list for the Sea Salt & Vinegar flavor:

While the base ingredients are the same, the seasoning contains 2 different dairy products in buttermilk and lactose. Even though the rest of the ingredients appear vegan, these 2 are a problem.

No Other Flavor of Miss Vickie’s is Vegan

All the other main flavors have similar problem ingredients are all dairy byproducts like whey or buttermilk.

I don’t have much else to say about those. They’re all vegetarian, but clearly not vegan-friendly.

If you’re not familiar with it, whey is an ingredient derived from milk.

A Quick Note on Sugar

There’s sugar in the seasoning for all these flavors.

Some sugar in North America is filtered with bone char, and isn’t vegan. However, it’s a grey area and many vegans don’t worry too much about it.

Obviously these flavors all not vegan already due to the dairy, but I wanted to mention this issue just so you’re aware of it in the future when looking at other food products (typically junk food).

Alternatives to Miss Vickie’s For Vegans

Again, Miss Vickie’s does launch other flavors from time to time, often for limited runs.

So if you see a different flavor in the store, it’s worth checking the ingredients list, but chances are it won’t be vegan.

On a related note, many Lay’s flavors are likely vegan, and there are typically several vegan chips in the “health” food aisle of most grocery stores (although much more expensive).