When I first went vegan, I heard that Twizzlers were vegan in a few different places.

They don’t contain gelatin, like many other non-vegan candies, so I can see why someone might think that.

However, there’s a very good chance that Twizzlers are not vegan-friendly.

I’ll walk you through why I think this, and you can decide for yourself if you still want to eat them. 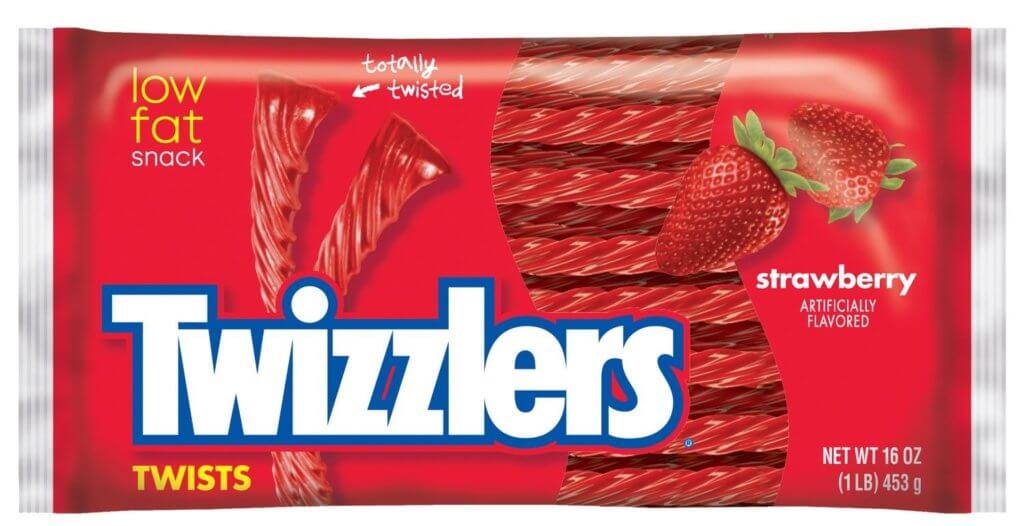 Here are the ingredients for strawberry twists (the standard ones), but the other Twizzler varieties made by the Hershey company, like pull ‘n peels and nibs, have similar ingredients:

There’s no obvious ingredients from animals like gelatin, which is common in other candy. However, that doesn’t mean that Twizzlers are vegan.

I’ve highlighted the ingredients we need to go over.

So on top of ingredients like glycerin or monoglycerides that may contain animal products, we have other ingredients that are controversial at best.

You’ll need to decide where you stand on those issues if you’re considering eating Twizzlers.

There is a chance that all these 3 “problem” ingredients are in fact vegan, but the chance is fairly high that at least one is not.

So, we can’t conclude for sure that Twizzlers are vegan or that they’re not.

If you’re okay with taking a risk like this, then enjoy your Twizzlers.

Otherwise, look for snacks that are clearly vegan candies, or skip the unhealthy candy and go for something like dark chocolate, or make a vegan health snack.

Do What You Feel Is Reasonable

Remember that even if you eat products like this that are considered controversial, you’ve already eliminated 99.9% or so of animal suffering on your behalf by avoiding obvious animal ingredients.

That’s why I’ve even seen PETA (or PETA kids) say that Twizzlers are vegan. Their argument would be that they contain no obvious animal products in them, and it may be overwhelming or unreasonable to avoid them for other reasons.

For me, it’s no problem to avoid candy like this and be on the safe side. I barely ate anything like this when I wasn’t vegan in the first place.

But being this cautious for everything you eat may be much more difficult for you.

So while I may personally disagree with PETA on this specific topic, you need to decide what you feel is reasonable for you as a vegan. No one, not even PETA or The Vegan Society, can tell you what you’re comfortable with, or what’s right or wrong.