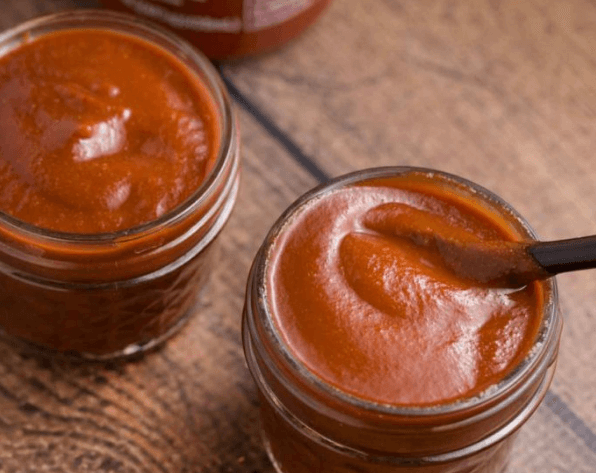 Some vegan foods can be a bit bland (same could be said for food in general).

One of the best ways to make just about anything taste better is barbecue sauce. There are some really good vegan grilling cookbooks out there.

And the good news is that many barbecue (BBQ) sauces are vegan.

Non-Vegan Ingredients in BBQ Sauce to Look Out For

The main animal products that you need to check the ingredients for in BBQ sauce are:

Also, very few sauces are labelled as vegan (although I’ve seen one at Whole Foods), and most contain “sugar”. It’s possible that this sugar has been processed with animal bones, and it’s up to you to decide if you’re okay with that.

While you should check each individual sauce you are thinking about buying, here’s a short list of popular BBQ Sauces that happen to be vegan.

Keep in mind that some of these sauces have multiple flavors, and they have different ingredients that may not be vegan. 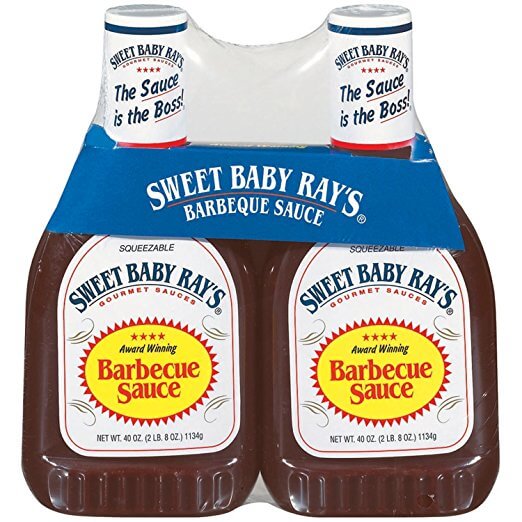 Here are the ingredients in Sweet Baby Ray’s BBQ sauce:

While not particularly healthy, almost all of those ingredients are clearly vegan.

The only one that gives me pause is the “natural flavors.” Natural flavors covers a wide range of ingredients, but in this case they are likely vegan friendly.

I’ve contacted Sweet Baby Ray’s for a confirmation, and will update this page if I get a response.

Update: I did get a response, here’s the relevant bit:

Therefore, I think we can pretty safely conclude that the original flavor of Sweet Baby Ray’s is vegan.

Note that the honey flavors contain honey, and are clearly not vegan. 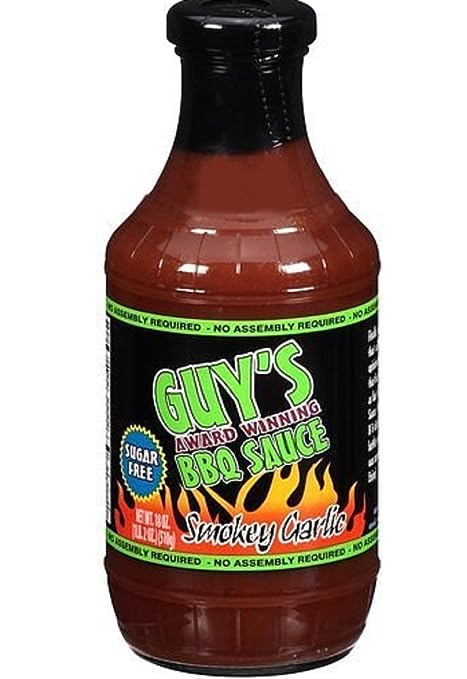 Again, let’s look at the ingredients.

Quite a bit healthier than some of the other options so far, and it appears that Guy’s Award Winning Sugar Free BBQ Sauce is also vegan. 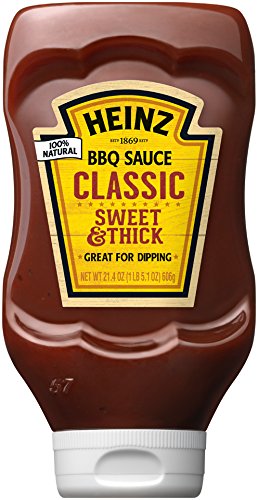 Heinz has many flavors that they sell in convenient ketchup-like bottles. Some are vegan, and some are not.

Let’s look at the most popular ones.

The ingredients in Classic Barbecue Sauce are:

The big issue here is sugar. For a large manufacturer like Heinz, at least one of their suppliers likely uses sugar that was refined using bone char.

For that reason, Heinz’s Classic BBQ Sauce is likely not vegan.

Many other flavors are clearly not vegan.

For example, Sweet & Smoky Kansas City Style BBQ Sauce is NOT vegan since it has anchovies.

Remember to check the label when it’s time to buy. You can also contact Heinz if there’s a specific flavor you’re interested in and are unsure about. 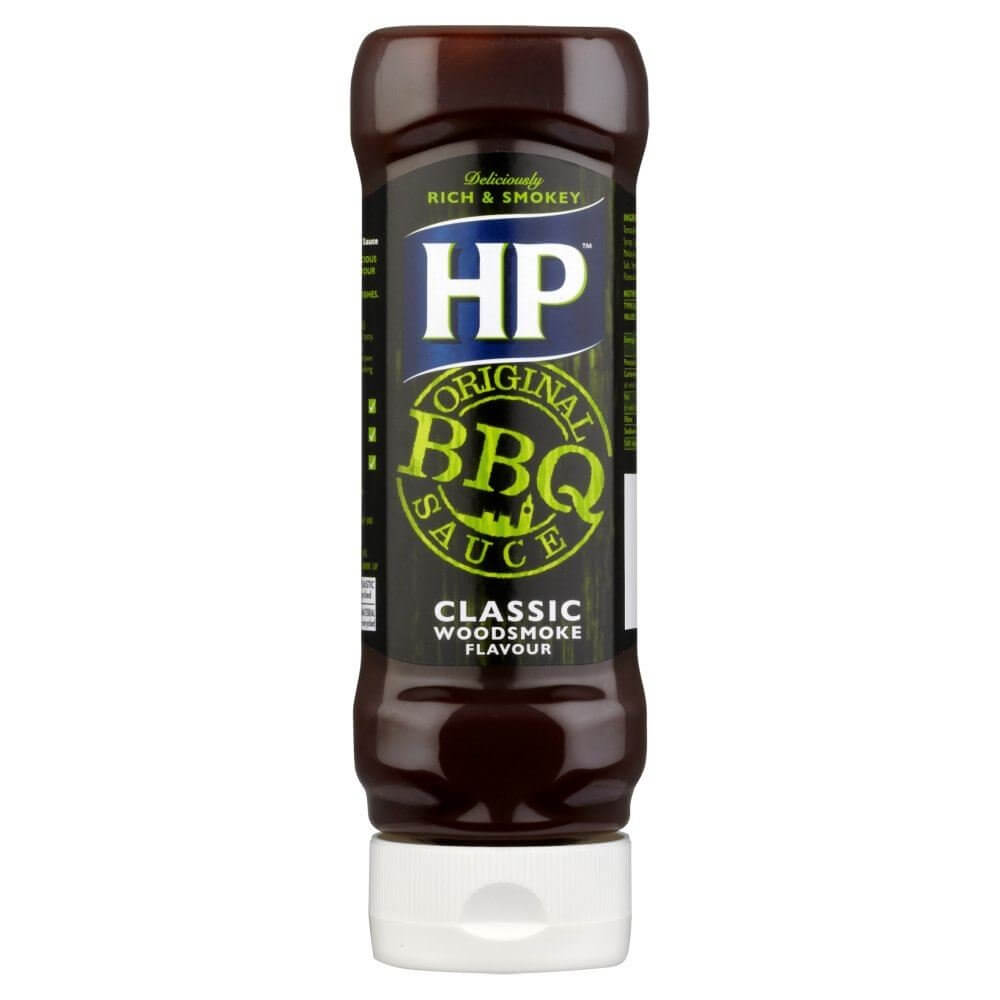 HP BBQ sauce is made by Heinz, specifically for the UK market.

Here are the ingredients in the “Classic” flavor:

Sugar should not be an issue since the product is produced in Europe.

Flavourings could be an issue, since it’s an umbrella term, but it’s pretty unlikely for a flavoring derived from dairy/meat to be here.

However, HP Honey BBQ sauce is not vegan, since it contains honey.

Bull’s-Eye is another popular sauce that is made by Heinz.

Here’s the ingredient list so you can see for yourself:

Again, the issue is the “sugar”, which is probably made using bone char.

The ingredients may vary based on where you live, but based on this list, Bull’s Eye Original BBQ Sauce is likely not vegan.

I contacted their support about this issue, and the reply I received was pretty useless:

I apologize but unfortunately this ingredient information is not currently available. As you can imagine our products change frequently, and maintaining a list of products that contain enzymes would be virtually impossible.

That doesn’t make me any more optimistic about this sauce.

Is Cowtown Night Of The Living BBQ Sauce Vegan?

Finally, this is a popular sauce coming from Kansas City. It won the Best Hot Barbecue Sauce award at the 2002 American Royal Barbecue Contest, and it’s reasonably healthy as well.

Take a look at the ingredients:

Mainly tomato paste and spices, as BBQ sauce should be. No animal products either.

Unfortunately it does have “sugar” in the ketchup and brown sugar (which is made from white sugar). There’s a good chance that these were processed with bone char, so while we can’t say for certain, Cowtown BBQ Sauce is probably not vegan-friendly.

If you want to be 100% sure that your BBQ sauce is vegan, make it yourself. There’s quite a few simple recipes that are great.

Here are 3 homemade recipes that you can try.

This recipe from Veggie Chick is both sweet and spicy. It goes well on just about everything.

Oh She Glows is a super popular recipe blog. I even have a cookbook from it and everything I’ve made from it is great.

This recipe is fairly unique because it is based on olive oil and crushed tomatoes.

You’ll find it mostly spicy, it’s not too sweet.

Finally, this recipe is pretty simple to follow, and it’s definitely on the sweet side. You might want to reduce the amount of maple syrup in it if you find that it’s too sweet.