When I first went vegan, I thought that vegan protein powder would be a step down from whey protein in terms of quality.

Since then, I’ve learned that not only is it just as effective, but there are some other benefits that you can feel good about as well.

So whether you’re vegan or not, I think it’s good that you’re considering a vegan alternative to whey protein powder, and I hope you end up giving it a try.

One of the main reasons to go vegan, or even just eat fewer animal products is because it reduces your carbon footprint.

Our World in Data has a great chart that shows the greenhouse gas emissions per 100 grams of protein of several protein sources. 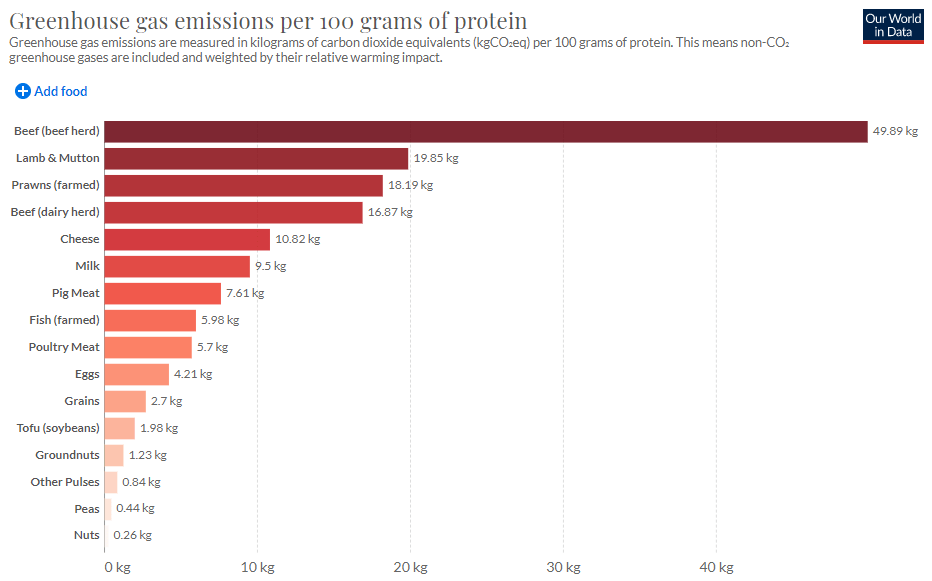 Not surprisingly, animal products make up all of the worst offenders.

Milk (which whey is derived from) results in 9.6 kg of greenhouse gas emissions per 100 grams of protein, while peas only emit 0.44 kg. In other words, pea protein emits roughly 95% fewer greenhouse gases.

Pea protein is by far the most common type used in vegan protein powders.

Other plant sources that are often included are hemp, brown rice, and there are a few soy protein powders.

While not all of those are on the chart above, they all have much lower emissions than milk.

Vegan protein powder has a much smaller impact on the environment.

2. Vegan Protein Powder is Just as Good as Whey for Building Muscle

Whey really is the gold standard of protein quality. It’s a “complete protein” by every definition of the term (which varies based on the organization you ask).

However, it turns out that most research shows that vegan protein powder is just as good as whey for building muscle. Even if whey has a slightly better amino acid profile, the other protein sources throughout the day will fill in the gaps.

Note that many vegan protein powders blend together plant protein sources to form a complete protein.

The link just above outlines the current research on this topic, but I’ll share with you the conclusion of one good study here. A 12 week study with 161 male subjects compared whey and protein powder against a placebo group and found:

In addition to an appropriate training, the supplementation with pea protein promoted a greater increase of muscle thickness as compared to Placebo… Since no difference was obtained between the two protein groups,

The idea that every single protein source that you consume needs to be a complete protein is an outdated myth.

Research shows that you can substitute pea protein for whey protein and get essentially identical results.

Most people are lactose intolerant to some degree. Even those who aren’t allergic often get acne issues from consuming dairy products.

Although most lactose is removed in the process of creating whey protein powder, there is still some that can cause problems.

Plant-based protein powders are obviously dairy-free, but the manufacturers often go out of the way to make it free from other common allergens (e.g. gluten, nuts, soy).

The label below is a common list of what you’ll see: 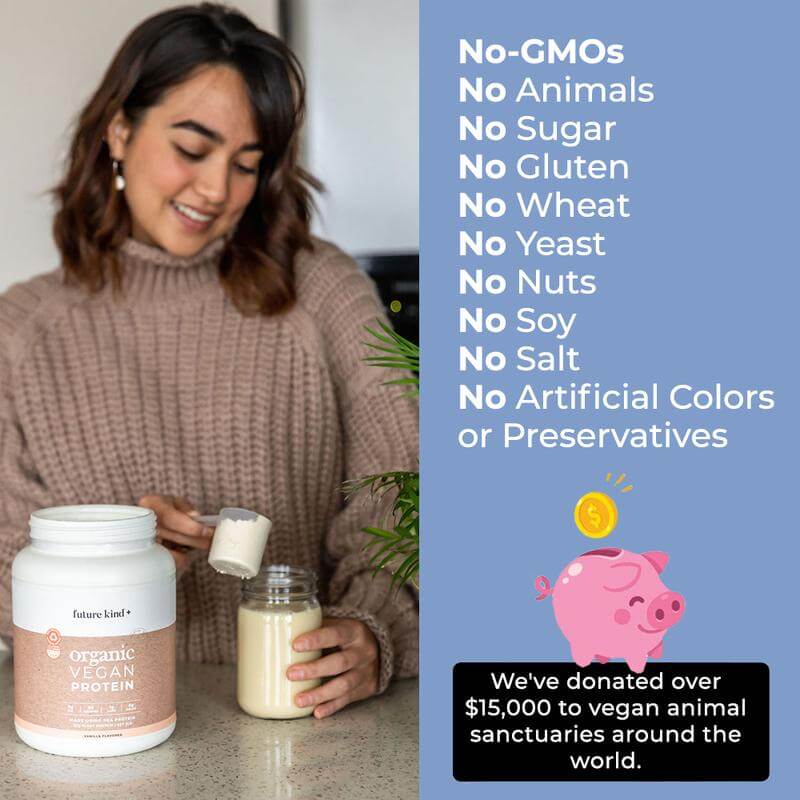 As far as I know, pea allergies are extremely rare, so there aren’t many people who have significant issues with most vegan protein powders.

With most common allergens removed from plant protein powders, you’re less likely to have skin or stomach issues.

Whey protein is pretty much just protein and nothing else.

As an added benefit, pea protein is high in iron because peas are one of the top vegan sources of iron. This is perfect for vegan diets since some people have difficulties getting enough.

For example, in one serving of Future Kind’s vegan protein, there is 6.1mg of iron, or 34% of the RDA for women (who need more than men). 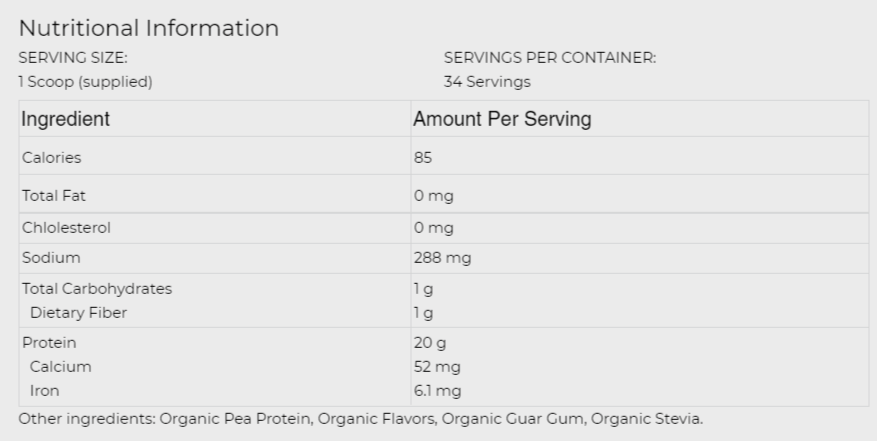 This isn’t out of the ordinary, pretty much any pea protein will have a similar level of iron.

If you give blood, this is a nice extra benefit.

Vegan protein powders tend to have a lot of iron if they contain pea protein. They are also more likely to have other ingredients that add other vitamins and minerals.

The importance of this benefit depends a lot on where you are.

On top of potentially having higher levels of growth hormone and antibiotics in milk products, including whey, abuse of antibiotics may also lead to antimicrobial resistance that could have far reaching effects.

With a vegan protein, you know you’re getting something from a plant. With whey, it’s hard to be confident that there’s nothing else in there.

I think this is more important for vegans, because it’s hard to hit certain protein targets and macros on a vegan diet.

Of all the vegan protein powders I’ve tested, the average amount of calories per serving is 136, with about 79 calories coming from protein. That’s unbelievably helpful while trying to lose weight.

Some vegan protein powders even have over 90% of their calories coming from protein.

The macros of protein powder make it very useful to people trying to lose or maintain weight on a vegan diet.

Are There Any Risks of Vegan Protein Powder vs Whey?

I’m not going to go into these risks in too much detail, but the risks for vegan protein powder are the same as whey protein powder.

Too Much Protein Can Cause Long Term Health Issues

Vegan or not, you probably don’t need as much protein as you think.

Research has shown that getting too much protein can lead to long-term adverse effects including:

Before you get scared, we’re talking about consuming a lot of protein for a long time before these risks are significant.

Having 2-3 shakes a day on a vegan diet won’t put you anywhere close to that limit.

Heavy Metal Consumption May Be an Issue

Some independent studies have shown that there are detectable levels of heavy metals in protein powders (both whey and plant-based).

However, when you put those levels in context with safe limits, they don’t seem to be a big concern.

Overall, this isn’t a big issue to me personally, but I will be keeping an eye on future research into this topic.

For now, you can see my detailed summary of whether heavy metals in vegan protein powder are dangerous.

Are Some Vegan Protein Powders Better Than Others?

The best vegan protein powder is one that you’ll actually drink, so it’s important to find one that you like.

I’ve tested about 40 vegan protein powders at this point. Some taste like dirt, others are great, and I’d say there’s more variation than with whey protein powders.

If you do need a recommendation or second opinion, you can see my full list of what I think are the best vegan protein powders here.