Calcium deficiency is fairly common in the general population.

But vegans can be at an even higher risk of it.

Most studies have come to the same conclusion – most vegans don’t get enough calcium.

One study found that vegans getting less than 525 mg of calcium per day increased to a higher risk of bone fractures. (Interesting side note: the vegans with more than 525 mg per day had the lowest fracture risk of any dietary group.)

It’s definitely possible to get enough through vegan food sources of calcium, but can be hard for many vegans.

If you’re worried about calcium deficiency, a supplement is likely your best option.

Most calcium supplements are derived from stone, but many are not vegan.

It’s because almost all calcium supplements have other vitamins, minerals, and packaging ingredients included in them. This includes obvious animal products like gelatin and beeswax.

Many calcium supplements also contain vitamin D3, which is almost always not vegan (derived from sheep’s wool) unless specified otherwise.

You need to find a calcium supplement clearly labelled as “vegan.”

Note that these are more expensive. They often cost around $0.25 per pill, and you may need multiple pills per day. It’s a significant expense, but think of it in context of how much you spend on food and it’s not too bad.

What to Look For in a Calcium Supplement for Vegans

Before I can go over the top vegan options, you need to understand what makes one product better than another.

There are 4 main factors that you’ll need to grasp, so I’ll go over them quickly now.

Which is the Best Form of Calcium in a Supplement?

There are several different forms of calcium supplements. Some absorb better than others, and the ones that absorb poorly often lead to gas and other stomach issues.

You’ll mainly only see these 3:

Form doesn’t matter too much as long as it doesn’t upset your stomach. Algae calcium is likely the best form of calcium though.

How Much Calcium Do You Need Per Day?

We’ve already covered that you should get at least 525 mg of calcium per day from food AND supplements. 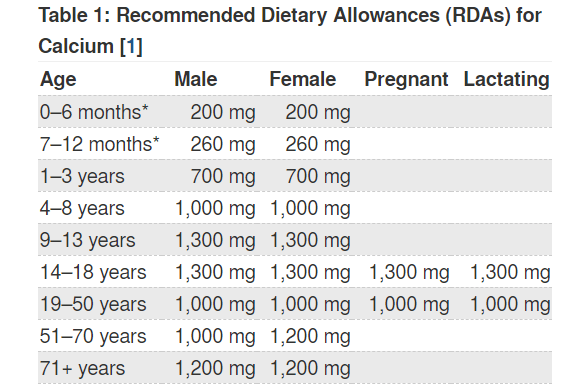 In order for your body to absorb and use calcium, you need vitamin D, the “sunshine vitamin.”

Since vitamin D deficiency is very common (affects around 75% of people in the winter), this can be an issue.

While you can take a separate vegan vitamin D supplement, some calcium supplements have vitamin D included.

You should be looking for one that will give you at least 800 IU (International Unit) per day of vitamin D.

Additionally, vitamin D3 is much better absorbed than vitamin D2 (a different form), so look for D3. I’ll point these out clearly in the mini-reviews later on.

To add one more level of complexity, vitamin D also requires vitamin K to be used properly, which is why you’ll see many calcium supplements also have vitamin K.

Magnesium is Needed for Calcium Absorption

The last thing you need to look for is magnesium.

Long story short, magnesium is essential for absorbing both vitamin D and calcium.

You don’t necessarily need this in your calcium supplement, as long as you’re getting enough from your food.

Summary of what to look for in an ideal vegan calcium supplement:

The Top Calcium Supplements for Vegans [Comparison Table and Reviews]

After doing a lot of searching, there aren’t too many vegan calcium supplements that fit most of those conditions.

Eventually, I found 4 that I thought were all good options.

They all have reasonable amounts of calcium in good forms, and fit different budgets.

Here’s a summary table to quickly identify the ones you might be most interested in. I’ve gone into more detail for each product down below.

Let’s go into the more detailed reasons why one supplement might be better for you than another. 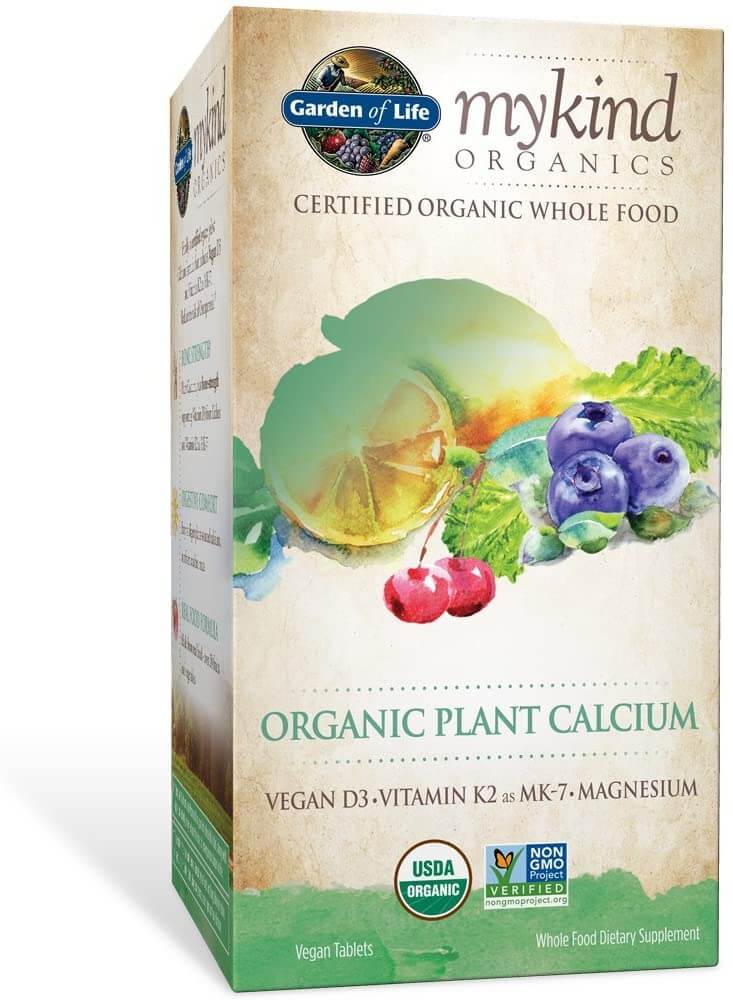 If budget isn’t too big of an issue, this is the one that best overall in terms of product quality.

Garden of Life is very reputable, and the supplement ticks all our boxes:

But there are 2 potential downsides. First, the cost per serving sucks, it’ll work out to around a dollar a day depending on the exact price you get.

Secondly, you have to take 4 tablets (medium-sized) to get a serving. If you hate swallowing pills, this could be a deal-breaker.

So if you can afford it, this is a great option, but if not, I’ve got a few others that might be better for you here. 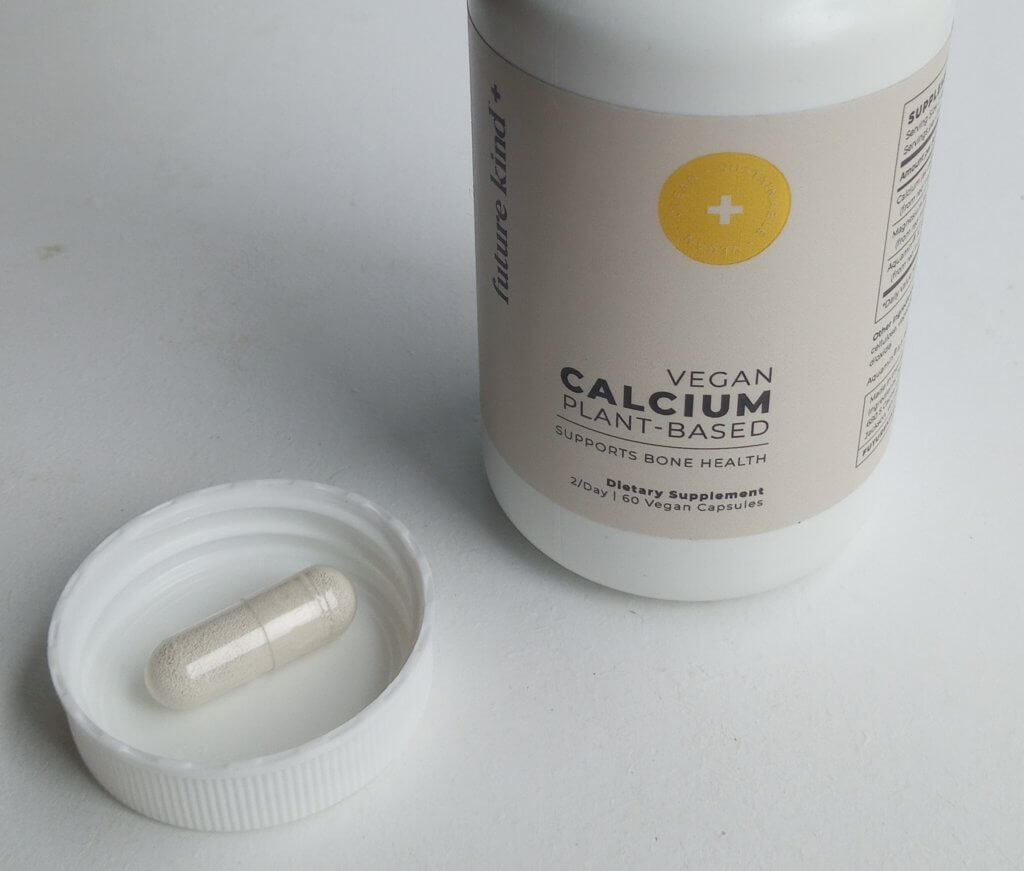 Future Kind is one of my favorite supplement companies, just because all their products are vegan, and they also have a great emphasis on sustainability and product quality.

I’ve ordered many of their products before, including this calcium supplement.

It has 500 mg of algae-based calcium and 38 mg of magnesium per 2 capsule serving. The capsules themselves are about the size of a small cashew, so they’re pretty easy to swallow (yes, weird comparison, but I had no coins). 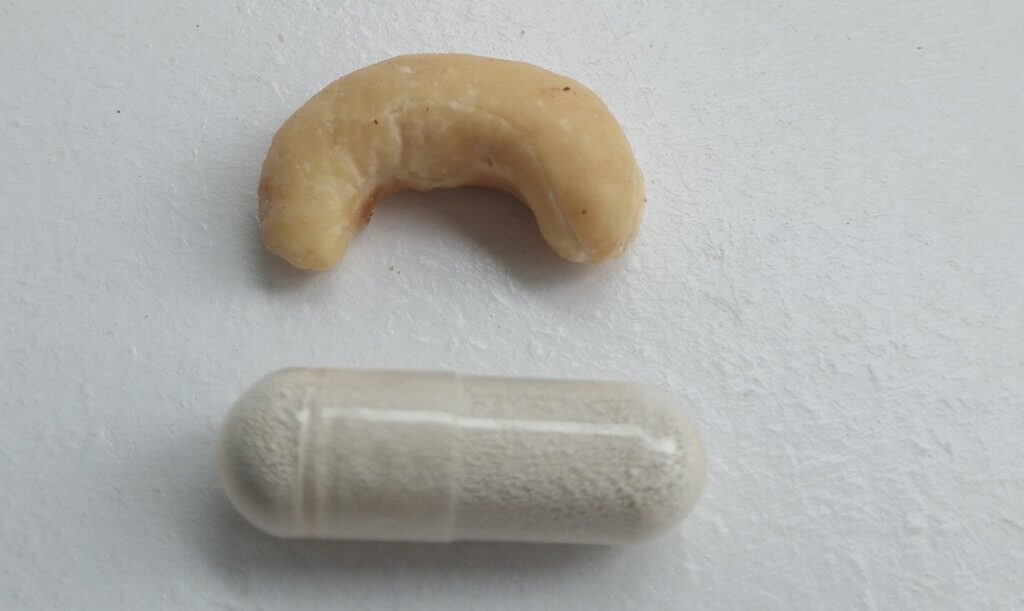 Note that it does not contain vitamin D, which is why I didn’t rank it number 1 on this list. But with that being said, some people get plenty of sun and already have more than enough vitamin D, so that’s not a deal-breaker for everyone.

Amazon Elements is simply Amazon’s brand put on top of a manufacturer’s product.

But they choose their manufacturers carefully, and have decent transparency.

The best parts of this supplement are:

The only slight con is the vitamin D, which is why this isn’t the best overall for me.

Secondly, it’s in the D2 form, which means that you’ll absorb even less.

So if you go with this option, and don’t get much sun, you should still buy another vitamin D supplement to go with it. This may work out to be more expensive than some of the options here. 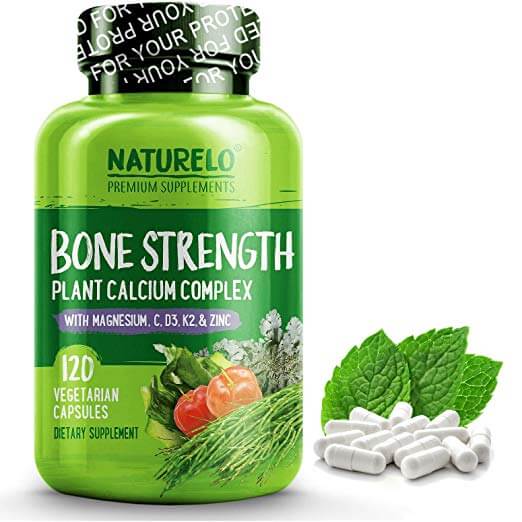 Naturelo is very similar to Garden of Life.

It’s expensive and you need to take 4 capsules per day, which were the 2 main downsides of Garden of Life.

The 2 main differences are:

I don’t consider the calcium form to be a big deal, but you may one way or another.