I started looking for the best vegan protein powder over a year ago by buying and testing as many as I could find.

I wanted to find a plant-based protein powder that was a complete protein, tasted good, and was reasonably priced.

Before we get to the results, if you’re other ways to get more protein, see my guide on how to get enough protein as a vegan.

The Best Vegan Protein Powder in Canada of 2020: Highlights

If you’re looking for a simple recommendation, here are the best of the best:

How I Tested Each Protein Powder

I developed a consistent testing process to be as objective as possible.

Eventually, I determined that the 4 most important parts of a protein supplement were:

All protein powders were scored out of 100 total (25 for each category), and a high score is of course a good thing in all cases.

If you’d like to know the specific tests and formulas I used, see my detailed testing methodology.

Otherwise, let’s look at the scores and compare them.

I’ll break down each product in a decent amount of detail so you can see why each powder scored how they did.

Alternatively, I’ve written full reviews for each protein powder. I’ve linked to them at the very end, you can skip to them if you’d like. 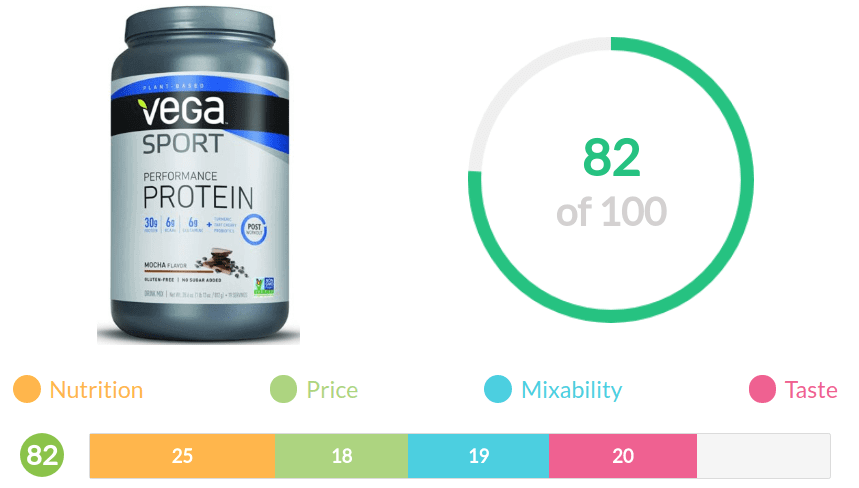 Vega Sport is likely your best option overall, especially if you don’t like ordering online. It’s not perfect, so I’ll be keeping my eyes peeled for a better one.

There’s a very good chance you’ve seen Vega Sport before. It’s in a lot of grocery stores (in Toronto at least), and most major supplement stores.

While it’s expensive compared to the whey proteins that are usually next to it in the store, it’s actually a bit cheaper than average for a vegan protein powder in Canada.

That surprised me, but the numbers don’t lie.

How Does Vega Sport Taste?

I’ve tried the chocolate and mocha, and both were good (mocha was my favorite of the 2 though).

How Cheap is Vega Sport?

However, I wanted to also mention that I’ve seen it go on fairly large sales before both online, and in certain stores (it seems like Shopper’s Drug Mart is the most common for sales in stores).

Keep an eye out for it at stores.

Of the very top options in Canada, Vega mixes slightly worse than the rest. There were 2 grams of “clumps” in the shake during my testing.

Basically, most of it will be smooth, but you’ll find yourself tasting little balls/chunks of protein powder here and there unless you mix it really well

This is the strongest aspect of Vega Sport to me. It scored a perfect 25 for protein content (nutrition score).

Each serving has 150 calories, and 30 grams of protein, which is 80% of calories overall. Very few plant-based protein powders anywhere have a higher proportion of protein than this.

Overall, Vega Sport tastes good, has a near-perfect protein content, and is relatively affordable for Canadians. It’s a well-balanced shake that I think most vegans would like.

Cheapest for bulk purchases in Canada 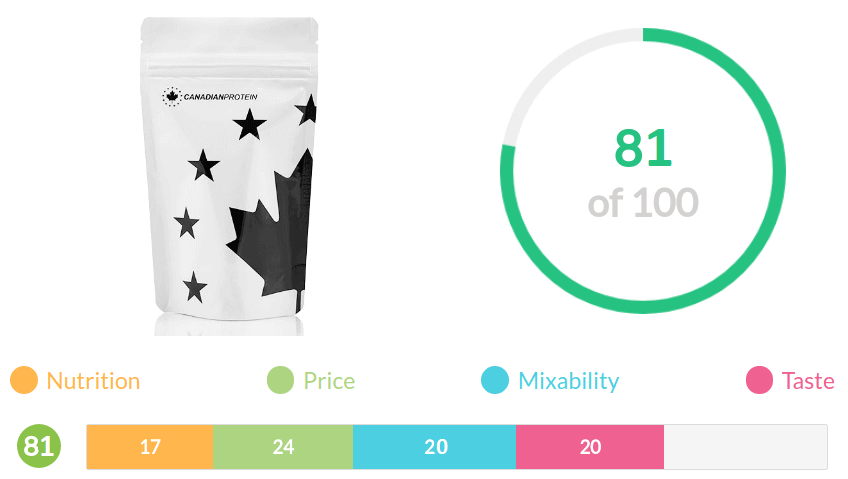 This powder is solid all the way around, and as inexpensive as you’ll find unless you find a crazy deal.

Long after most of my testing is done, I drink this daily with water or almond milk and it tastes good overall.

There’s a bit of a chalky texture, but that can be said for just about every single vegan protein powder.

You’ll get used to it quickly, and while you may not fall in love with the taste, it’s pretty good for a protein shake.

I’ve tried the chocolate, vanilla, and apple cinnamon, I’m not a big fan of the apple cinnamon (it’s okay), but the other two are great.

A mixability score of 22 out of 25 tells you the whole story.

It doesn’t mix perfectly, but there was only a gram of clumps leftover when I strained it.

That equates to a bit of chalkiness and the occasional clump to swallow, but overall it mixes well.

If you don’t care about taste, there are others on this list that have more protein per 100 calories.

This blend has 21 grams of protein per 126 calorie serving, or about 67% of calories. 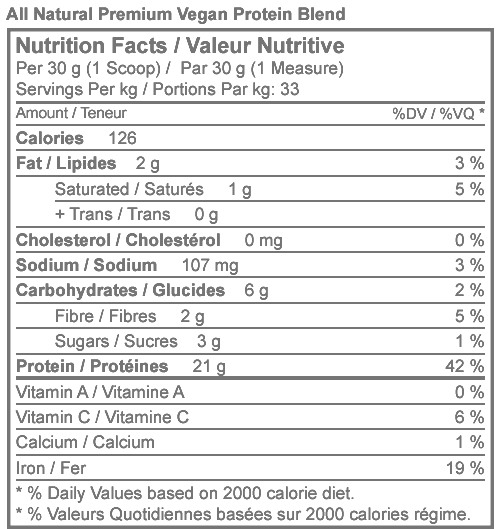 The ingredient lists are pretty simple, with no sketchy ingredients:

Overall, I think that this is the best option for most vegan Canadians. If buying the giant 6 kg (13 lb) bags of it for my personal use on a regular basis isn’t putting action behind my words, I don’t know what is. 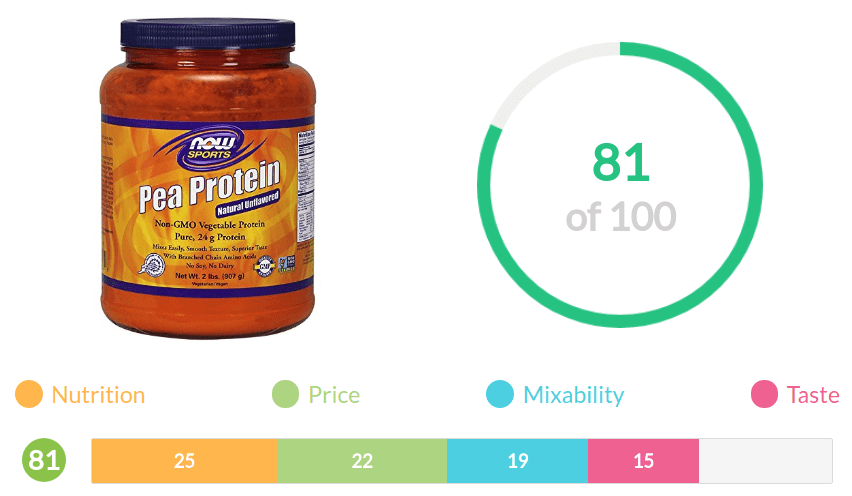 Cheap, high protein content, and mediocre taste is how I would sum up NOW Sports’ Pea Protein.

The one big downside beside the taste is that there’s no blend of protein sources, it’s just pea protein. While it’s technically still a “complete protein”, it’s low in methionine. However, if you have a well-rounded diet, you’ll get methionine
from other sources, so I wouldn’t be worried about it.

This powder only scored a 15 out of 25 for taste, otherwise it would have scored much higher.

It’s quite chalky no matter how well you mix it, so it’s unlikely you’ll enjoy it, even if you added sugar.

However, it is drinkable, and if taste isn’t crucial for you, it’s a good option.

Just like Vega Sport, 80% of the calories in NOW Sports Pea Protein comes from protein. That results in a perfect nutrition score, and only 4 protein powders out of the 16 here achieved that.

The ingredients list is quite simple, and is one of the few without stevia (if you buy the unflavored):

Overall, NOW Sports Pea Protein is a great choice if taste doesn’t matter too much for you and you’re more focused on a cheap protein powder with a high protein content. 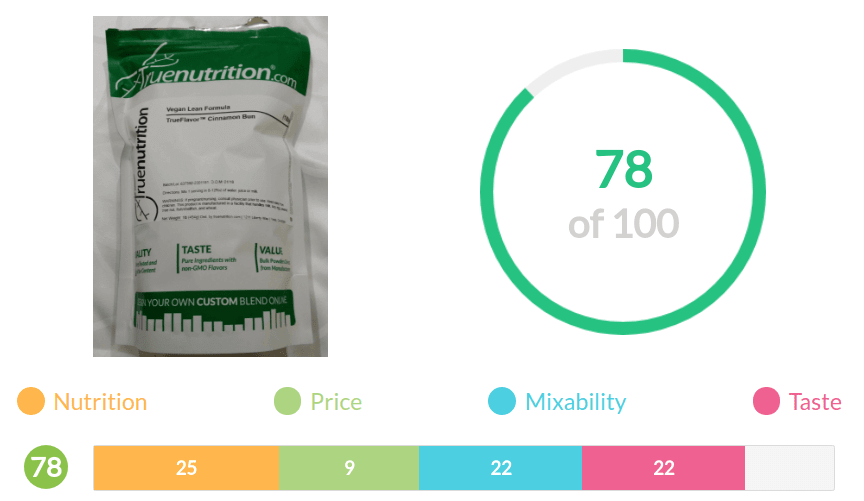 True Nutrition is an American-based online supplement store, but they do ship to Canada. The price score here takes into account the shipping.

I named it the best for weight loss and bodybuilding because it has the highest protein content of all the protein powders here.

It has 24.4 grams of protein per 110 calorie serving (89% of calories), and literally broke the scale I came up with for testing.

One cool thing about True Nutrition is that they let you have full control over the product. While “Vegan Lean” is a pre-made blend, you can make your own if you’d like.

You can choose from several flavors, and choose the intensity of it. 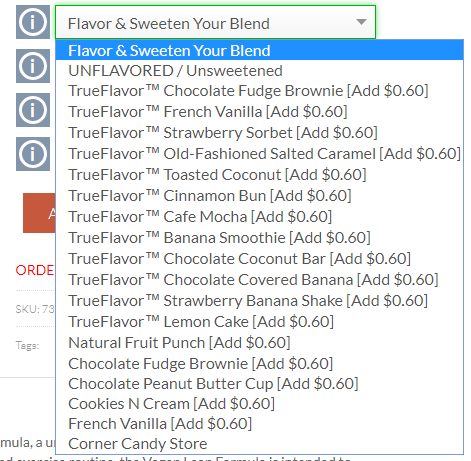 The taste was great, but there was a tiny bit of chalkiness and aftertaste. I still enjoyed the bag I ordered though (I went with cinnamon bun because I love cinnamon).

The best protein for athletes 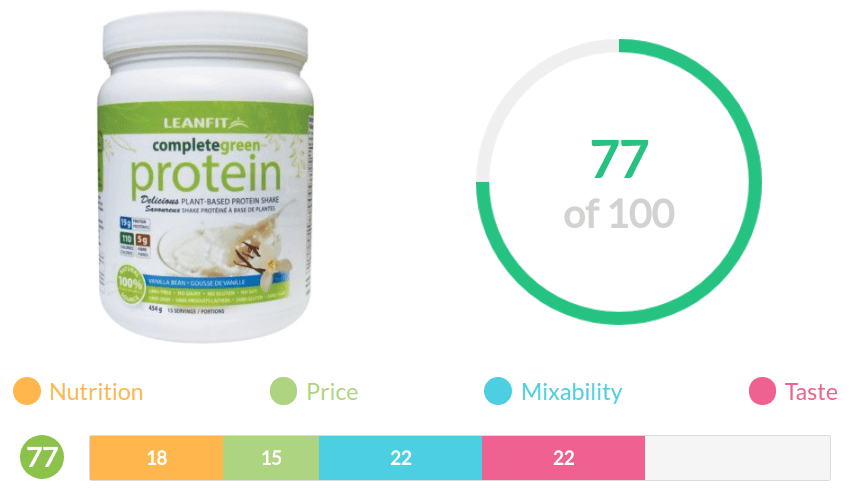 The biggest strength of Leanfit is how well it mixes and tastes. You can also find it at some Costcos, which is convenient if you’re already a member.

Leanfit tied for first place when it came to taste. The flavor is just a wee bit off, but there’s virtually no chalkiness or aftertaste.

How Inexpensive is Leanfit for Canadians?

How Well Does Does Complete Green Mix?

This powder mixes very well, which is part of why you’ll likely like the taste. There was just 1 gram of remnants after straining a test shake. 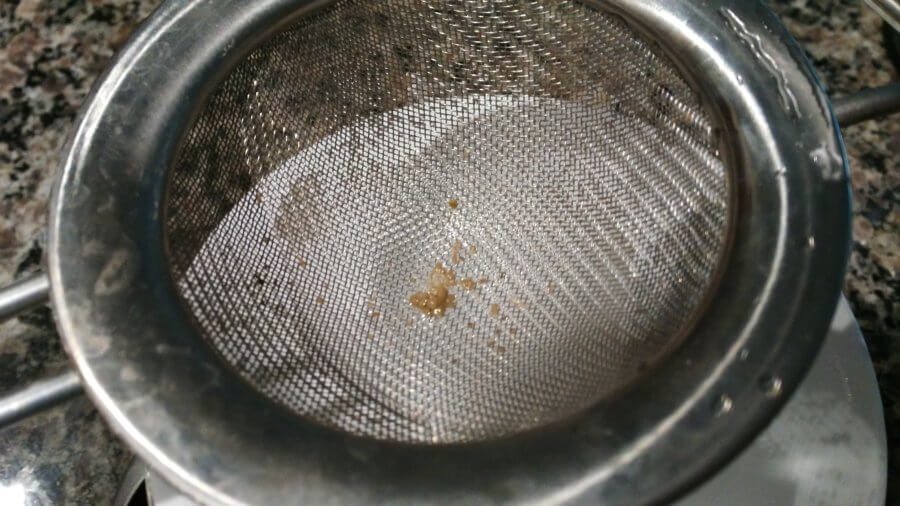 While it’s not bad, Leanfit is about average when it comes to protein percentage.

There’s 19 grams of protein (78 calories) and 110 calories per serving. This means protein makes up about 71% of the calories.

Not the greatest if you’re trying to lose weight and every calorie counts, but fine for a general protein shake.

Overall, Leanfit Complete Green is a great tasting protein powder for Canadians, with a decent protein content at a relatively cheap price. 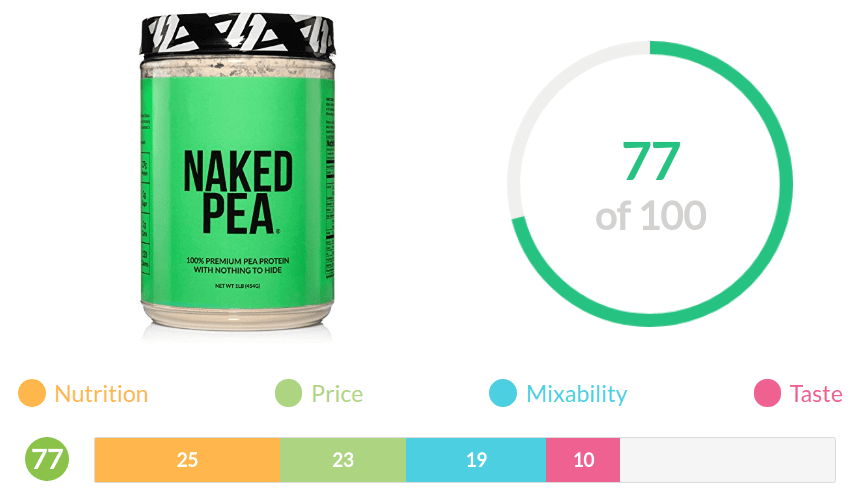 My god does this protein powder taste bad.

I’m slowly getting through it by adding it to oatmeal and protein pancakes, but it’s a slog. It’s actually painful to me to drink this as a shake.

The price is good, the protein content is great, and it mixes well. It just tastes so bad that even though the overall score is decent, I can’t recommend it.

In particular, there were 3 main issues:

I can stomach most protein powders, but this is one of the toughest. Take that into consideration before thinking about buying this. 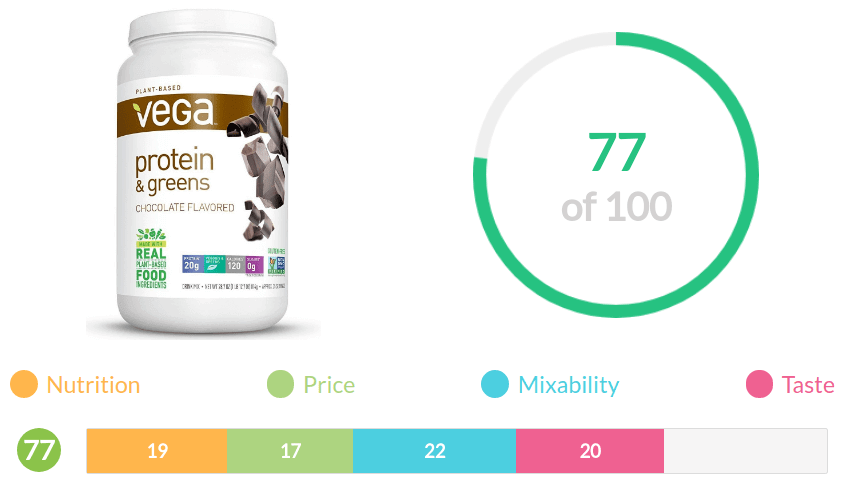 This is a solid overall protein powder that’s a bit above average in all categories. Unlike Naked Pea above, I’m comfortable recommending it.

It’s another Vega product, and pretty easily found in stores if you’re not a fan of online shopping.

Vega Protein and Greens is very similar to Vega Sport, it just has less protein, but it has ingredients like kale and spinach added to give it extra vitamins and minerals. It’s an okay vegan source of calcium, which can often be hard to get.

Basically, if you’re an athlete, go with Vega Sport (#2 overall). If you’re just looking for a protein powder that gives you a good amount of extra protein and general nutrition, try Vega Protein and Greens. 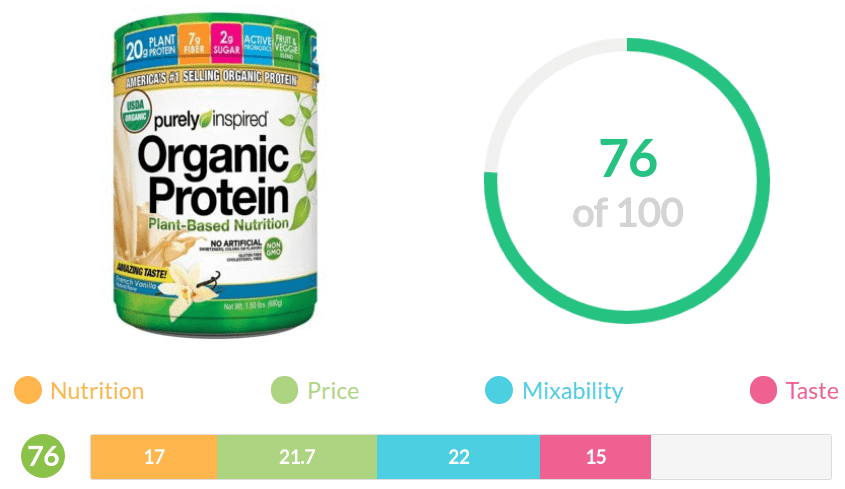 This is the first organic protein powder on this list. I tried a handful organic powders during this testing, but most are terrible.

Purely Inspired is the only organic powder in Canada that I’d really recommend.

How Does Purely Inspired Taste?

The texture is quite chalky. It’s still drinkable, but you won’t enjoy the texture.

The flavor is okay, but nothing special.

Overall, you won’t be choking it down, but it won’t be a pleasant experience either.

Despite being all organic, Purely Inspired is one of the cheapest vegan protein powders in Canada.

That’s the best part of this product to me.

Besides taste, this is the other main weakness of Purely Inspired.

It has 20 grams of protein per 130 calorie serving. That’s not horrible, but at 61.5% of total calories, it’s worse than most other vegan protein shakes.

Overall, for Canadians looking for an organic protein powder, Purely Inspired is my recommendation to you. It’s cheap, has high quality ingredients, and is drinkable (although doesn’t taste good).

At this point, I’ve gone over all the protein powders that I’d recommend for Canadians.

But I tested and did a complete review for every single protein powder in the comparison table up above on this page.

Here are links to all those reviews if you’re looking for more detail that I didn’t provide yet. Hopefully they’ll answer any remaining questions that you have.