When it comes to plant-based meat alternatives, Beyond Meat is the leader.

It is one of the few meat alternative stocks you can invest in after going public in 2019.

Despite the lead in the young market, Beyond Meat has yet to have a profitable year as it has aggressively invested in scaling up.

Revenue for Beyond Meat has continued to grow each year, reaching $464.7 million in 2021.

It nearly tripled from 2018 to 2019, going from $88 million to $298 million, but has slowed down in recent years. This can be attributed to a number of reasons, including more competitors, COVID, and delays in scaling up production. 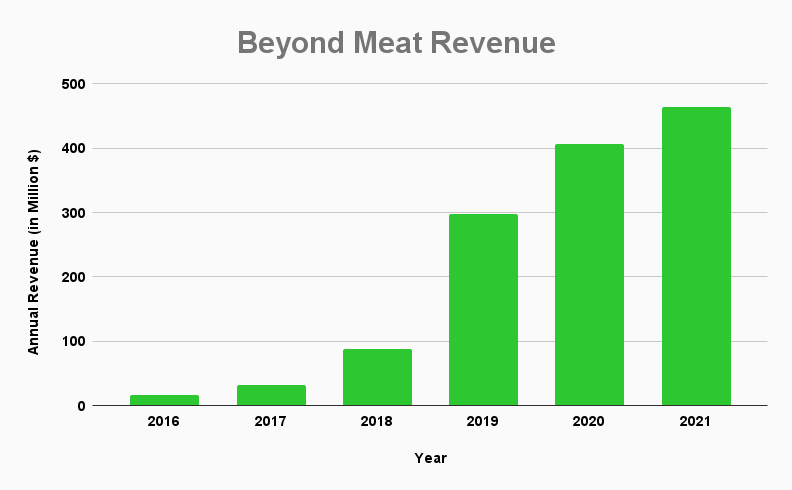 Even with the relative slowdown, Beyond Meat still has a 25% compound annual growth rate (CAGR) over the past 2 year period.

Beyond Meat Profit and Losses

Beyond Meat has yet to turn an annual profit. The company has been expanding facilities both in the United States, and internationally, so this isn’t that surprising. 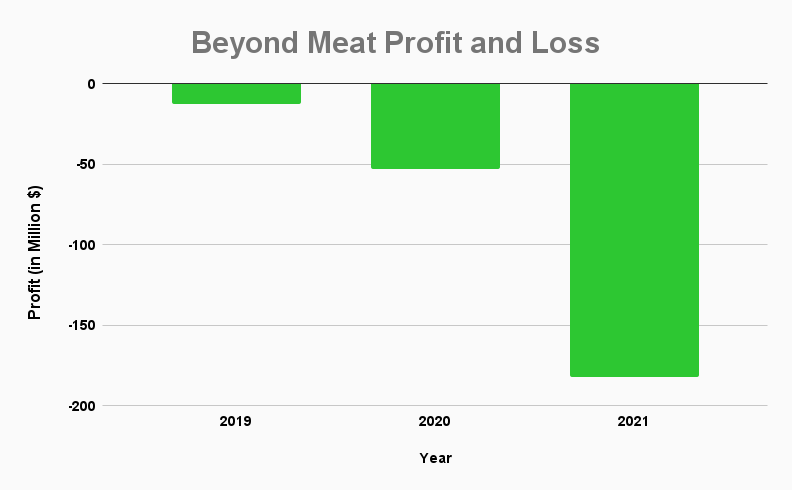 On top of these losses, Beyond Meat has also reported that it has about $1.2 billion of total consolidated indebtedness and liabilities. Despite that, the company has stated plans to incur more debt to grow further.

The plant-based meat industry had an estimated value of $4.3 billion in 2020. That gives Beyond Meat a market share of approximately 9.4%.

Beyond Meat Grocery and Restaurant Locations

As of December 2021, Beyond Meat was available in approximately 130,000 stores and restaurants worldwide, in over 90 countries.

More specifically, Beyond Meat was available in:

How Many Employees Does Beyond Meat Have?

In Beyond Meat’s 2021 S-1 filing, they reported having 1,108 full-time employees and 311 full-time contract workers as of the end of the year.

Impact of COVID on Beyond Meat Sales

COVID had a big impact on both retail and restaurant sales, which affected Beyond Meat’s sales.

Beyond Meat has aggressively expanded its facilities in recent years.

Most facilities are used primarily for manufacturing, but serve other business purposes as well.

The following table shows the size and location of each facility reported in a 2021 SEC filing by Beyond Meat.

In total, Beyond Meat leases approximately 794,000 square feet of space.

Who Eats Beyond Meat?

Beyond Meat has found success in not only targeting vegans and vegetarians, but the larger market of meat eaters.

The founder of Beyond Meat, Ethan Brown, has said that 93% of people purchasing Beyond Burgers are not vegetarian (or vegan).

This statistic is based on a 26 week test period in 2018 at the grocery store Kroger.

The Beyond Burger is the flagship product of Beyond Meat. It has accounted for over half of revenue, although this percent is trending down.

Beyond Meat has developed additional products like Beyond Sausage, Beef, and Meatballs to decrease their reliance on a single product.