When lab grown meat becomes easily available, some vegans will eat it, but I don’t think most will.

Cultivated meat is a topic that I’m following closely, as I’d love to feed my cats food made from lab grown meat.

Is It Possible For an Animal Product to Be Vegan?

The fact that lab grown meat is still “meat” will be an issue for many, but it’s not clear whether or not that makes it not vegan by itself.

While there’s no official definition of veganism, I’ve always seen this definition from the Vegan Society referenced:

Veganism is a philosophy and way of living which seeks to exclude—as far as is possible and practicable—all forms of exploitation of, and cruelty to, animals for food, clothing or any other purpose… In dietary terms it denotes the practice of dispensing with all products derived wholly or partly from animals.

These 2 highlighted parts seem like they might conflict with lab grown meat: if meat could be made with no harm to an animal, then would it need to be excluded from a vegan diet?

I don’t have a clear answer to this, and it’s likely that the most accepted definition of what veganism entails will need to be revisited over time.

Are Animals Harmed or Exploited to Make Cultivated Meat?

I’m not going to go over the entire lab grown meat process in detail here, but there are 3 main steps:

Vegans are concerned with the first two steps.

Here’s a short video that outlines this process if you’d like a bit more detail.

How Do They Get Cells For Lab Grown Meat?

Stem cells are extracted from animals with a biopsy under local anaesthesia. 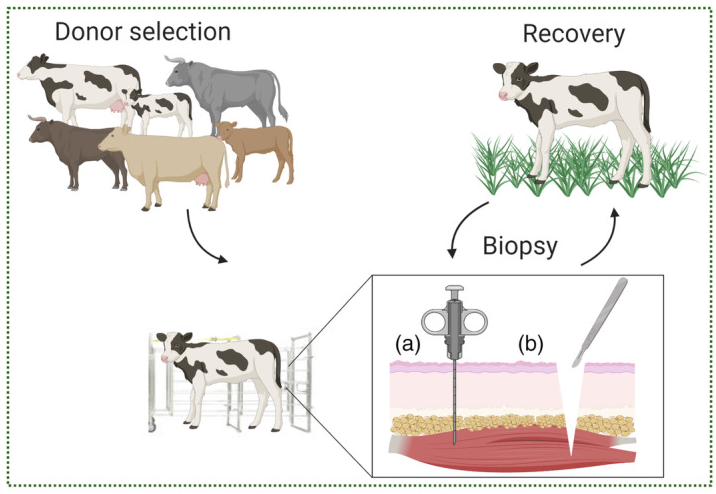 Biopsies extract a very small sample of tissue. This process does no long-term harm to the animal, but this process can be stressful and uncomfortable for animals.

There may be a way around this, but still raises other ethical questions. Meatable is one of the best known lab grown meat startups right now. It’s a Dutch company that has taken the approach of getting stem cells from umbilical cords:

Many clean meat companies typically take their cells from a small piece of tissue from a live animal. But Meatable banks a baby’s stem cells at birth by taking them from umbilical cords. Meatable’s CEO, Krijin De Nood, explained the process to Business Insider. “This way, we don’t harm the animals at all,” he said. “And it’s material that would otherwise get thrown away.”

Scaling would be the biggest concern that I’d have with this approach (with lab grown meat, would enough cows be birthed?), so we’ll have to see what happens.

At least for now, starter stem cells are needed to start the process, so there is a clear argument that there is some exploitation of the animal, which would not be vegan-friendly.

Once stem cells are extracted, they are developed through the use of a growth medium.

The first versions of lab grown meat used fetal bovine serum (FBS), which is extracted from pregnant cows that are killed – obviously not vegan.

The good news for vegans is that FBS is expensive (at least $500 per liter, with 50 L needed for a burger), which is why the first versions of lab grown meat cost thousands of dollars.

While some lab grown meat companies still use FBS, most have already shifted towards cheaper plant-based growth mediums. By the time lab grown meat hits the supermarket shelves, this should not be a concern at all.

How Far Are We From Lab Grown Meat?

Most leading startups have functional prototypes that can be made for a reasonable price. The biggest challenge is scaling up, but some companies have already started building production-sized plants.

In addition, there are regulatory issues with selling lab grown meat that need to be worked out.

However, some lab grown meat companies are already selling their products in some restaurants. For example, the startup SuperMeat sells their lab grown chicken in a Tel Aviv restaurant.

GOOD Meat also has their cultured chicken for sale in a restaurant in Singapore.

For now, the current lab grown meat process isn’t vegan. Even with a plant-based serum, most would argue that animals are being exploited (even though it’s a billion times better than traditional meat).

Some vegans may be okay with the minor discomfort animals need to be put through, as long as they have ideal living conditions otherwise. Remember that there’s no single definition of veganism (even if some principles always exist), and that people interpret things differently.

If there’s a way to realistically scale lab grown meat using stem cells extracted from umbilical cords like Meatable is doing, then it might be possible to create a vegan-friendly meat.

At that point, the definition of veganism will need to be revisited.

Lab Grown Meat Should Still Be Supported By Vegans

Personally, since going vegan the appearance and idea of meat seems gross to me, so I don’t think I’d eat lab grown meat.

That being said, I am a huge supporter of lab grown meat and I hope it takes over the meat industry as soon as possible.

It causes so much less suffering to animals, and is way better for the environment as well. For many reasons, it will likely be cheaper than actual meat at a certain point, which will put the vast majority of slaughterhouses out of business.

Many people will never go vegan, but lab grown meat could be a way for those people to do much less harm to others.

Finally, see my page of lab grown meat companies to invest in if you’d like to financially support these startups.