Before that point, there were many ways that I justified killing animals for food.

One of the main ones was the notion that animals aren’t supposed to feel pain when slaughtered, right?

In theory, they shouldn’t, but after a lot of research, I learned that it’s often not the case (I’ve looked at if cows feel pain when slaughtered before).

It was kind of a pain for me to find an unbiased, accurate full picture of the situation, so that’s what I’ve tried to do here.

We’ll quickly look at slaughtering methods that countries use, and what happens in practice.

Again, I’m warning you that there are some graphic pictures and videos in this post. They’re not too bad compared to some of the things I’ve seen, but they depict real situations and I feel like you need to see them to get the answer to our original question.

First: How Are Animals Killed in Slaughterhouses?

Different countries have different laws and regulations for killing animals.

We’re going to look at the biggest producers of meat around the world, and how they are supposed to slaughter animals.

Then we’ll look at if these practices are actually followed and enforced after.

Slaughter in the U.S. is regulated through the Humane Methods of Livestock Slaughter Act; here’s the key part we’re interested in here:

(a) in the case of cattle, calves, horses, mules, sheep, swine, and other livestock, all animals are rendered insensible to pain by a single blow or gunshot or an electrical, chemical or other means that is rapid and effective, before being shackled, hoisted, thrown, cast, or cut;

In short, animals are supposed to be stunned so that they lose consciousness, and shouldn’t feel pain.

Brazil is one of the largest exporters of animal products.

Animal welfare and rights have improved in recent years, and cattle are supposed to be sunned unconscious before being killed, similar to in the U.S.

However, they also export live cattle to countries like Egypt, where investigations have revealed that they are often stabbed and have leg tendons cut before being killed, among other inhumane slaughter methods. More on this shortly…

We’ll just look at Britain here, since most of Europe has nearly identical legislation regarding animal slaughter.

In a typical slaughterhouse, animals are stunned and then hoisted into the air where they are killed by having their throats cut, or having a chest stick pierced close to their hearts.

If stunned correctly, like in the U.S., this should in theory be pain-free.

More recently, poultry (chickens) are increasingly being killed with gas, however, many are still hung upside down before being put through electrified water to stun them.

Animal and even human rights aren’t exactly a big part of Chinese culture.

When it comes to animal slaughter in China, there’s basically no legislation.

I’m not going to include the images or videos of these, but certain provinces in China do things like:

Farms in China have recently just started adopting old Western practices that are outlawed in most Western countries.

What About Halal Slaughter?

Halal slaughter varies quite a bit by country.

In the U.K., about 88% of animals killed by halal methods were stunned before being killed.

That other 12% is the “traditional” halal slaughter, which doesn’t include stunning. These animals definitely feel pain.

The Real Question: Are Regulations/Laws Followed?

Aside from China, most other large countries seem to have laws that would spare animals pain from death itself.

So the question is are those laws and regulations followed and enforced?

A report released by the USDA Office of Inspector General in 2006 revealed that 2 of 12 slaughterhouses visited applied procedures inconsistently. In other words, they weren’t following regulations as intended.

In Brazil, as mentioned before, cattle are often exported alive, and then tortured and killed in painful ways.

One of my personal defense mechanisms in the past was saying “vegans are just cherry-picking examples of abuse.”

But at this point, there are thousands of videos with evidence of abuse in slaughterhouses. 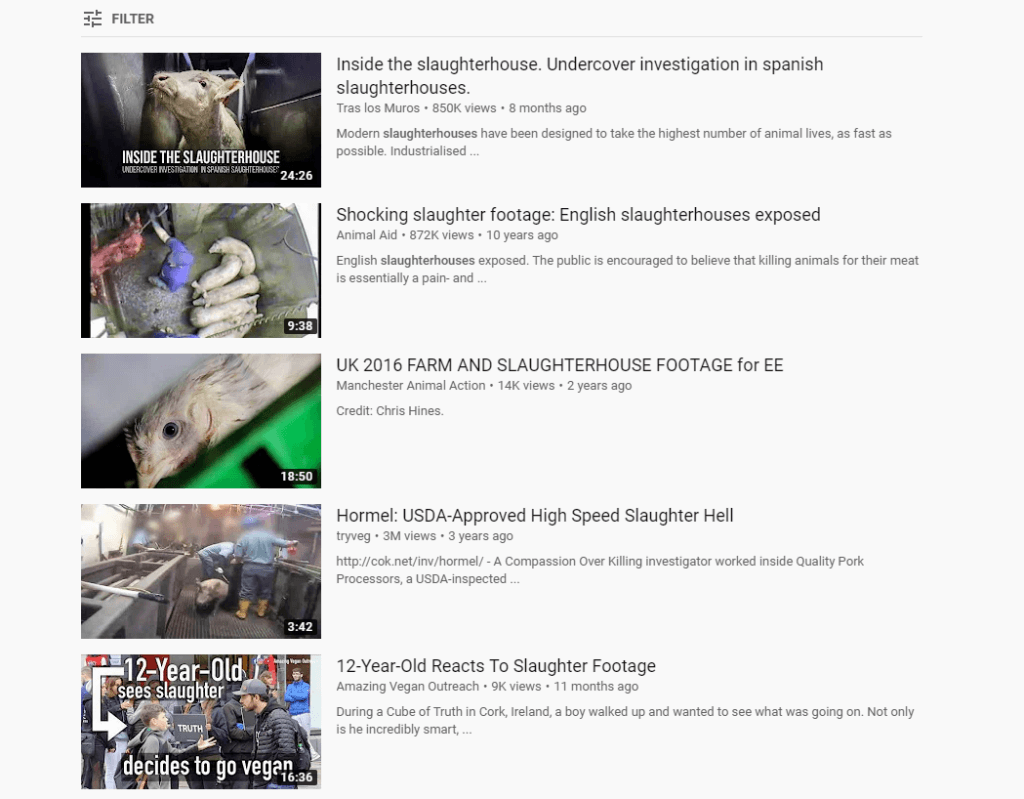 Tens of thousands of animals are killed a day in factory slaughter plants.

Corners are cut, and animals suffer because of it. There’s not time to check consciousness and pain levels when you’re killing this many animals in what’s effectively an assembly line.

The brightest and most caring people are never going to step foot into a slaughterhouse. So think about the people who work at them.

Either they’re seriously messed up and enjoy killing animals on a mass scale, or they’re people who are essentially forced into the job because they have no other options. There’s a reason most slaughter plant workers end up traumatized.

I can’t imagine anyone being able to do a “good” job under those conditions.

What About Pain Before Slaugthering?

Finally, consider what happens before animals are killed.

They are stuffed into transport trucks, and forced into the slaughter plant, waiting to be killed.

And the thing that kills me is that pigs are arguably smarter than dogs. As soon as the first few are killed, the rest know what is going to happen.

Could you imagine the fear you would feel if put in a situation like that?

One more question you may want to consider now is that even if you could shock them, could you pull that knife across the throat of a cow or chicken?

I don’t think many people could.

This is the most compelling reason to go vegan in my opinion.