Even though lentils don’t look like beans, they are still legumes and are known to cause gas for most people.

Depending on the specific person and type of lentil eaten, they can even be worse than some beans.

I’ll quickly walk you through the reasons why this happens, and what you can do to reduce gas from lentils in the future.

How Is Gas Formed in General?

Certain carbohydrates do not break down well in the stomach and small intestine, and they can go on to be fermented in the large intestine.

Fermentation produces gas, which can vary based on the particular bacteria involved. Most notably, it can produce methane, which produces a strong smell. Bloating occurs when a large enough volume of gas is produced in the intestine.

Even though it may be uncomfortable, some flatulence isn’t necessarily bad, although extreme amounts can indicate a serious underlying health issue.

Why Do Lentils Cause Gas?

There are 2 types of carbohydrates in most legumes (including lentils) that are hard to break down and are fermented in the large intestine – causing gas.

Legumes Are High in Raffinose

Raffinose belongs to a class of sugars called oligosaccharides.

If you’ve ever heard of FODMAPs, oligosaccharides are the “O” of that group of carbohydrates that can cause stomach problems.

Raffinose is known to cause flatulence because humans lack the enzyme needed to break it down, so it ends up fermenting in the lower intestine. Most importantly, raffinose is found in large amounts in foods like beans, lentils, whole grains, and vegetables.

It’s hard to find exact data for raffinose content, but one analysis found that lentils have even more raffinose than other types of legumes:

Sugar alcohols and oligosaccharide concentrations were generally higher in lentil than in common bean and chickpea.

So not only can lentils make people gassy, they may be worse than other types of beans (although it depends on the type of bean).

Fiber is a carbohydrate that can’t be digested easily by humans, but not all types of fiber equal.

You’ll find soluble fiber in many foods like legumes, fruits, and vegetables. 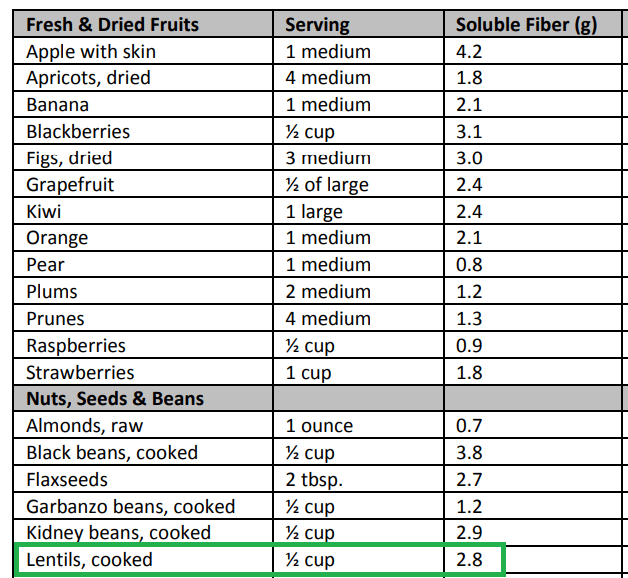 There’s about 8 grams of fiber in a 1/2 cup serving of cooked lentils, and about 3 grams of that fiber is soluble.

Typically, most people eat at least a few hundred grams of lentils in one serving, which is quite a bit of soluble fiber.

The flatulence caused by eating lentils is due to the high raffinose and soluble fiber content in them.

How To Reduce Gas Caused By Lentils

There are 2 main ways you can reduce the amount of gas produced by lentils.

The first is to soak and sprout your lentils.Studies have shown that sprouting legumes like lentils reduces the amount of oligosaccharides like raffinose by a large percentage (but doesn’t completely eliminate them).

Here’s how you do it.

The “sprouts” will start to appear after about 24 hours, and you can go for as long as you’d like.

The second option is to use bean enzymes. These are supplements that you can add to food or just swallow alongside your meal that will digest the raffinose before it reaches the large intestine. See my page on beano and vegan bean enzymes for more details

There are a few other related questions that I came across and would like to quickly address before wrapping up.

Do Red Lentils Cause Gas?

Red lentils are literally brown lentils that have the outer shells removed, which contain a large portion of the fiber in lentils.

So while red lentils still contain a high amount of raffinose, they contain about a third of the fiber as brown lentils. This means that red lentils will still cause gas, but less compared to other types of lentils.

You can see my brown lentils vs red lentils comparison for complete details.

Are Lentils Bad For Your Stomach?

Just because lentils can cause some bloating, doesn’t mean that they are actually harming you or are unhealthy. They have a ton of fiber and minerals that make them very healthy foods to have in a diet.

Do Canned Lentils Cause Gas?

Canned lentils are cooked lentils that were soaked for a minimum amount of time and cooked right after. In other words, they have the full amount of fiber and raffinose, and will cause gas if eaten in large amounts.

Do Sprouted Lentils Cause Gas?

Sprouted lentils have a lot less raffinose, but still have some, plus a lot of soluble fiber. So while sprouted lentils will cause less gas, they will still produce some gas if many servings are eaten.