Yet some people do claim that they’re constipated while taking vitamin B12 supplements.

I’m going to quickly walk you through what related evidence on B12 and constipation is available, and go over a few things that might explain why this is happening.

Is Constipation a Side Effect of Vitamin B12 Supplements?

Despite a fairly exhaustive search of current literature, there’s no established link between vitamin B12 supplements and constipation. And B12 has been studied quite a bit, so you’d think it would come up if it was common.

Some studies that had subjects take B12 have reported some adverse effects, but typically at a very low rate that isn’t statistically significant (i.e. they could have just been coincidences).

Of those studies, constipation has not been reported as a side effect. For example, one study had 9 patients (25%) experience some mild adverse effect during the study (1). This included:

Five of those patients only had a single adverse event, while 2 patients had 2 events, and 2 had 6 events.

An allergic reaction to vitamin B12 is possible, but rare. It typically occurs more often with injections rather than oral supplements and should be discussed with a healthcare professional if you suspect it’s an issue (2).

Even in the case of an allergic reaction, constipation isn’t a common side effect.

It’s very unlikely that a vitamin B12 injection or oral supplement would cause constipation. They are typically well tolerated, even in large amounts, and are more likely to cause other side effects if anything.

Low Quality Supplements May Contain More Than Just B12

One factor to mention is that vitamin supplements, particularly in North America, are poorly regulated.

They often contain more than just what’s on the label.

For example, one study found that unapproved pharmaceutical ingredients were identified in 776 dietary supplements (3).

Depending on what these ingredients are, it’s not impossible for them to cause digestive issues like constipation. 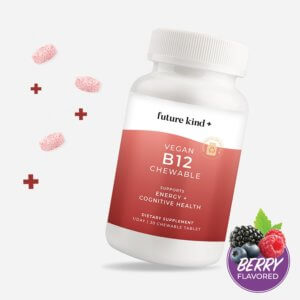 In that case, a higher quality vitamin B12 supplement may clear up any issues.

Vitamin B12 Deficiency Is What Usually Causes Constipation

As I was looking over research on this topic it became clear that several studies show that vitamin B12 deficiency often causes constipation (4).

Vitamin B12 is involved in a lot of nerve functions, and a lack of vitamin B12 can reduce gastrointestinal motility (i.e. lead to constipation).

If we put this together, what I believe is happening is that:

It’s possible that continuing the B12 supplementation will actually clear up the constipation, although there could be a different cause.

There are a lot of anecdotes and research that both claim and show that vitamin B12 often relieves constipation, especially in those with IBD.

If a vitamin B12 deficiency is causing the constipation and it’s not improving during supplementation, it could be that vitamin B12 is not being absorbed. This can happen for a few different reasons, including a lack of stomach acid. A doctor should be consulted immediately in these cases if they haven’t already.

Research clearly indicates that vitamin B12 deficiencies are much more likely to cause constipation than having too much from a supplement. But our brains often look for connections, so it’s possible to tie together existing symptoms like constipation with a new B12 supplement.

Other Factors That May Be Causing Constipation

It’s also possible that vitamin B12 has absolutely nothing to do with constipation.

Constipation can be caused by several factors, including:

Having mild constipation occasionally isn’t that out of the ordinary.

However, chronic constipation can be indicative of a serious underlying problem, which is why consulting a doctor is important. They can also test vitamin B12 levels to see if they might be affecting digestive issues, and see if you’re taking any other medication that B12 supplements might interact with.