French fries are one of the few things in restaurants (fast food or otherwise) that are typically vegan.

I looked up the ingredient information for the most popular fast food chains to see if they were vegan.

The results are below.

If I missed any restaurant you were curious about, just let me know in a comment at the bottom of the page. 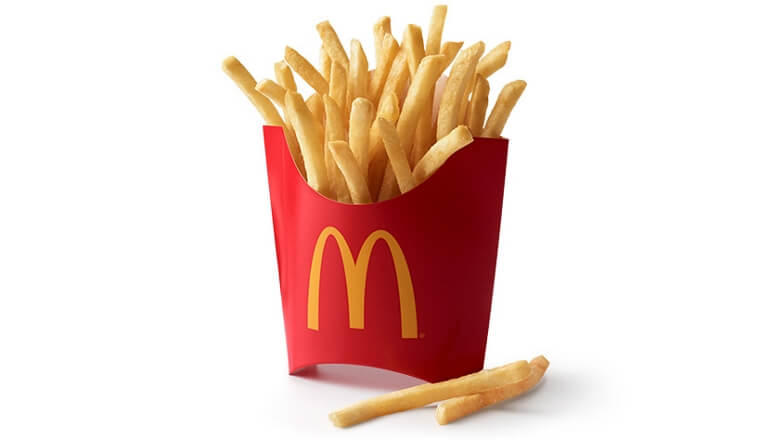 Starting with the biggest chain, here’s what you’ll find in Mcdonald’s fries:

All looks good for the most part, but unfortunately it has natural beef flavor which contains milk ingredients.

Wendy’s has one of the longest ingredient lists for french fries that I’ve ever seen, but all the ingredients themselves are from plants:

However, fries are cooked in the same oil as other menu items that contain milk or fish.

If you have allergies to any of those, you obviously can’t take the chance.

But whether or not they’re vegan-friendly is a grey-er issue. I would argue that they are vegan because the amounts of any animal ingredients they contain are very small, and you’re not affecting the demand for those animal ingredients in any way (that’s the important part).

Verdict: Most would consider Wendy’s french fries to be vegan, but strict vegans may not since the fries are cooked in the same oil as other products that contain milk or fish.

All the ingredients in Burger King’s fries are from plants:

But there are a few potential issues:

Both of those are grey issues, and the second one seems to be common at virtually all fast food restaurants, so you’ll need to decide where you stand on them.

Verdict: Some consider Burger King’s french fries to be vegan, but strict vegans may not because of the palm oil and since the fries are cooked in the same oil as other products that contain milk.

Here are the ingredients in homestyle fries:

Like Burger King’s fries, these may also have palm oil in them. It’s up to you to decide where you stand on that controversial ingredient.

Again, the cooking oil may be an issue.

The fries “May be cooked in the same oil as menu items that contain Egg, Milk, Soy, Wheat and Fish (where available).”

Verdict: Some consider Arby’s french fries to be vegan, but strict vegans may not because of the palm oil and since the fries are cooked in the same oil as other products that contain animal ingredients.

Freddy’s doesn’t currently have a full list of ingredients for their fries as far as I can see, but there’s enough information that we can get a good picture of the situation.

First, obviously cheese fries are not vegan, we’re only looking at the plain fries.

Second, Freddy’s states that plain fries have no animal allergens (egg, milk), but they may have gluten.

Because fries are fried in the same fryer as chicken strips and onion rings (which contain gluten).

So, we don’t know if there’s any palm oil used in the fries, and we have the same cross-contamination issue that every other fast food place has.

Verdict: We don’t know for sure if Freddy’s French Fries are vegan. They may or may not contain palm oil. But, we do know that the fries are cooked in the same oil used to cook chicken products, which may be an issue for some.