While some people accidentally gain weight on a vegan diet, more often than not it’s a challenge.

I’m going to assume you know the basics of bulking up.

And with enough protein and stimulation (i.e. strength training), you grow more muscle.

I’ve played semi-professional soccer for years, and I’ve bulked/cut throughout that time, some of it as a vegan.

In my experience, hitting macro targets on a cut is difficult, but bulking on a vegan diet is quite a bit easier.

It still has its challenges, but it’s not too bad.

This post will go over the most important things to keep in mind, and link you to helpful resources.

It’s tough to eat a lot of calories if you’re eating nothing but lettuce.

Instead, focus on calorie dense foods that are easy to eat a lot of.

Lucky for us, I’ve already written a post that has a list of the 50 highest calorie vegan foods per servings.

You’ll probably want to give it a look at some point, but for now here are the top 10:

Grains and nuts are the most caloric dense vegan foods.

Personally, oats are my go-to bulking meal. Not only are they cheap, but throw together 1 cup of steel cut oats, some flax, hemp seeds, and fruit, and you have an easy to eat 900-1000 calorie meal.

You can also add peanut butter to most recipes if you’re really struggling to hit your calorie target (or just eat it with a spoon).

Nuts are great snacks, but you can’t only eat them.

You’ll need to find actual recipes that turn out to be high in calories.

I have 2 resources which should be helpful for you here.

First, a compilation of the 8 best vegan bulking recipes.

Second, which is even more useful, is a collection of 150 high protein vegan recipes. Not all of these are high in calories per serving, but many are.

Click the “calorie” header in the table to sort by calories per serving, and you should be able to find several recipes you’re interested in making. 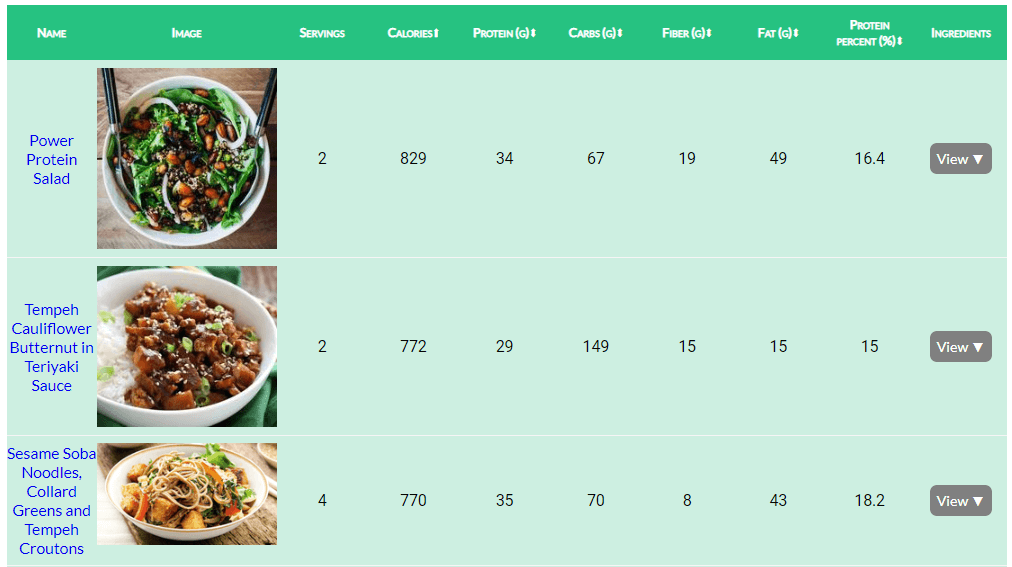 What About Weight Gain Supplements?

There aren’t too many vegan weight gain shakes or other supplements at the moment.

Your 2 best options if you’d like to go this route is to make your own vegan mass gainer, or drink protein shakes that are relatively high in calories.

Here’s a page with the best vegan protein powders that I made after testing over 20 popular shakes. Any of them will help you add some extra calories, and a good amount of protein.

Don’t Go Crazy With the Vegetables

While gorillas are basically vegetarians and eat mostly plants, we aren’t gorillas. We don’t have time to eat several pounds of greens all day.

Most vegans who struggle to gain weight are eating huge amounts of fibrous greens (e.g. lettuce, broccoli, celery) with almost every meal (although pretty damn healthy).

You can add oil to those to add extra calories, but it’s still going to tough to eat 3,000+ calories if you’re eating mostly salads.

I still eat quite a few vegetables on a bulk, but they should be a secondary part of meals, not the primary ingredient. My “salads” consist about 2/3rds of chickpeas or beans, with the rest as vegetables, not the other way around like most salads are.

Aside from all this, there’s no secret to gaining weight on a vegan diet, you just have to keep eating.

If you have any clever tips to bulking, feel free to share them in the comment section below.