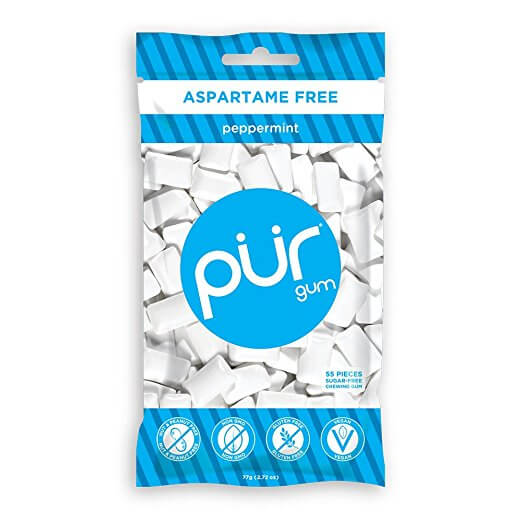 Some gums are vegan, and some aren’t, but it’s hard to tell just from the ingredients list.

But almost all gums have one ingredient – gum base – that is sometimes vegan-friendly, and sometimes not.

What is Gum Base?

The gum base is what makes your gum have its chewy texture.

It doesn’t have much or any nutrition, and isn’t digestible. It’s there for flavor and texture.

For gum base to be included as an ingredient, it can contain any of many ingredients. The exact ingredients vary by country, which makes it even more complicated.

For example, in the U.S., according to FDA guidelines, there are 46 ingredients that are permitted to go into “gum base”. They are a mix of:

It can be hard to find exact ingredient lists for other countries. For example, I couldn’t find an explicit list for Canada, but Health Canada refers back to the FDA guidelines, so I’d assume they’re the same.

Which Gum Base Ingredients Are Not Vegan?

Most of the ingredients listed above are vegan, but some are not. In particular:

The issue is that most major gum companies make their own proprietary gum bases, meaning that they can keep their ingredients a secret.

This means that the only way to be sure that a gum is vegan, is to find out from the manufacturer itself.

Which Gums Are and Are Not Vegan?

For most of the popular gum brands that you find in grocery and convenient stores, it’s impossible to know which flavors are or aren’t vegan based on the ingredients label.

You can contact the manufacturer, and even then you can’t always get a clear answer.

I’ve done detailed breakdowns of all the major gum brands to look at which flavors likely are or aren’t vegan-friendly:

But if you want to be safe, stick with one of these vegan gum brands. All of them clearly state that the gum is vegan-friendly, and most have the added benefit of being healthier for you as well.