Hemp is a common ingredient in many vegan protein powders.

The following chart shows a typical hemp protein’s amino acid profile. Essential amino acids have a little asterisk next to their names. 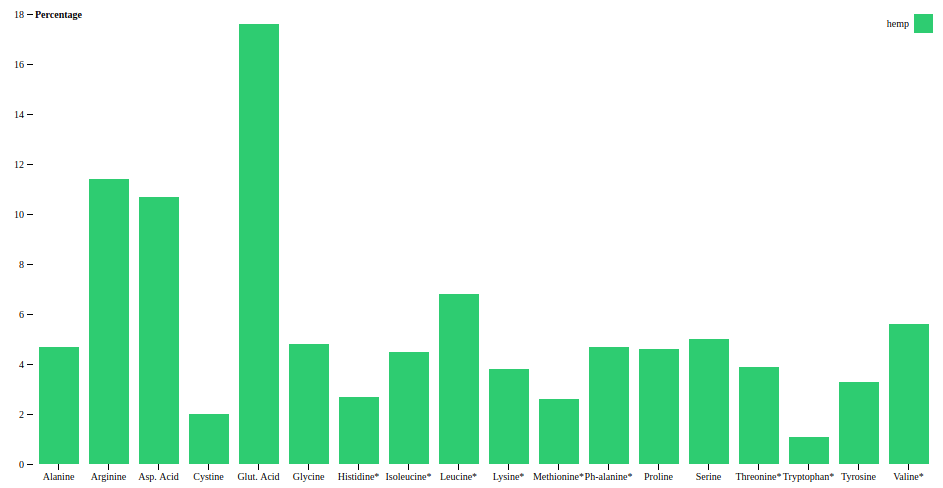 It might be easier to read in table form. Essential amino acids are again marked with an asterisk (*).

Is Hemp a Complete Protein?

Hemp is so close to being a complete protein, based on the relative amounts of each essential amino acid defined by the WHO:

It falls a bit short when it comes to lysine, but not by much.

The real issue with hemp is eating a lot of it. There’s only so many hemp seeds that you can add to a shake, oatmeal, or salad.

It’s debatable whether or not hemp is a complete amino acid (certain crops could be). It has a decent quantity of all essential amino acids.

But as long as you’re not getting 100% of your protein from hemp, it’s a non-issue.

Comparing hemp vs whey protein, just for reference to an animal protein, there are only a few main differences:

Considering leucine and isoleucine are both essential amino acids, that’s not great for hemp. But overall, hemp is a high quality protein source with a solid amino acid profile, which is arguably even better than soy’s amino acid profile.

Finally, note that beans compliment hemp quite well. They have a lot of leucine and isoleucine, and are great vegan sources of tryptophan.

While most people don’t need to worry about it, if you really want to ensure that you’re getting enough lysine in your diet, focus on eating foods relatively high in lysine to balance out hemp’s deficiency.

In terms of plant-based protein sources, this means eating mainly legumes. Here are the top 10 in terms of lysine per 100 grams:

Seven of the top 10 plant-based lysine sources are legumes.

The other 3 are grains (oats, buckwheat groats), or grain-based (vital wheat gluten). If you’re not familiar with it, vital wheat gluten is literally just gluten (a protein) isolated from wheat. It’s almost like a protein powder, and can be used to make seitan.

On that note, you might be interested in seitan’s amino acid profile. Note that seitan is still relatively low in lysine (it just has a high quantity of protein overall to make up for it), so you’ll probably want to stick to the other foods on the list above.