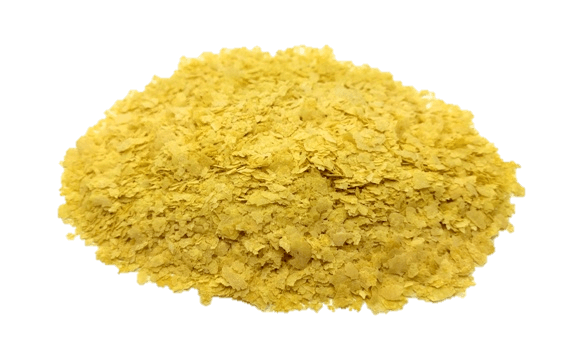 But after you get used to it, it’s a great substitute in foods to get that “cheesy” flavor, and  nutritional yeast is a pretty healthy food.

You’ve likely noticed that it contains well over 100% of some vitamins on the nutritional label, and reasonably wondered if it was safe to eat in large amounts.

So let’s find out.

As far macro content goes, it’s all protein and fiber, so no real concerns there. We’ll focus on the vitamins and minerals instead.

Most are water soluble, meaning that you’ll simply urinate out the rest, so there’s no concerns of overdoing it. However, some do have a tolerable upper limit that you want to be mindful of.

Using the nutritional data from Bob’s Red Mill nutritional yeast, I’ve created a table to help answer the question at hand. It may differ by brand, but should be close.

Four of the nutrients have no tolerable upper limit, so we don’t need to be worried about them at all.

Of the others ones, 3 require 17 servings (of 1/4 each), or 4.25 cups of nutritional yeast before being concerning. I don’t know anyone who could eat that much.

But two vitamins do look a bit worrying: Niacin and folate. Nutritional yeast is by far the best source of folate for vegans (although it’s not particularly hard to get).

If you have more than 1/8 of a cup of nutritional yeast, you will surpass the safe tolerable upper limit for adults.

The question is how big of a deal is this?

What Happens When You Have Too Much Niacin?

Even just a tablespoon of nutritional yeast gives some people enough niacin to cause skin flushing (turning red), and sometimes even becoming dizzy.

That’s why the upper limit is set pretty low.

If you’re affected by that, you probably shouldn’t have more than a tbsp or so of nutritional yeast per day.

But many people don’t have these issues, and won’t experience serious side effects unless they regularly take more than 2,000 mg of niacin per day, according to the Mayo Clinic.

Once you regularly ingest that much, you might see:

And you’d have to do that fairly regularly to cause serious damage (assuming you’re healthy and don’t have any weird reactions to niacin).

If you eat 5 cups of nutritional yeast on a regular basis, the amount of niacin can cause some health concerns, ranging from mild to severe.

What Happens When You Have Too Much Folate?

The upper limit is set really low, and it’s set specifically for folate from supplements, not food intake.

Furthermore, a very recent study (January 2018) from Queen Mary University of London, has basically said there’s no need for an upper folate limit.

They argue (strongly) that the upper limit was set incorrectly in the first place.

I’m not a medical professional, so you have to make your own judgement about this.

Personally, folate will not be a concern of mine when eating nutritional yeast.

The upper limit on folate is controversial. It’s possible that getting too much folate from nutritional yeast may cause health problems, but some researchers also say that there’s really no cap needed on folate intake.

Summary: How Much Nutritional Yeast Can You Eat in a Day?

The data is a bit conflicting, but let’s try to sum things up:

What all that means (and keep in mind this is not medical advice!), is that if you want to be on the safe side, keep your nutrition yeast intake to 1 tbsp per day.

If you don’t have any reaction to nutritional yeast, it’s a very healthy thing to add to your food. You should be fine eating anywhere up to 5 cups of it (I don’t even know how you’d do that).

In general, most people should aim for 1 tablespoon to 1/4 cup of nutritional yeast per day if eating it for health benefits. There’s typically no rush, since it takes a long time for nutritional yeast to go bad.