Beano is almost certainly not vegan.

For a long time, their products stated that they contained fish.

It appears that those statements have been removed from their products and website, but there’s still no clearly statement that it’s vegan friendly.

Even if that is no longer an issue, there’s still another potential issue in the ingredients for Beano:

Considering Beano seems like a product vegans would use a lot, you’d think they’d label their products clearly if they were vegan friendly. For that reason, I suspect they’re still not.

Hopefully that will change in the future.

Until then, there are alternatives.

The active ingredient in Beano – Alpha-galactosidase enzyme – is also in other products that are vegan.

There’s a chance that Beano uses vegetable-based magnesium stearate, but if they did, it seems strange that it wouldn’t be labelled clearly on the bottle. That makes me think that it’s not vegan-friendly.

There are 2 good alternatives for vegans to use instead.

The most popular one is Bean-zyme, you can find it on Amazon, and even in certain Walmarts. 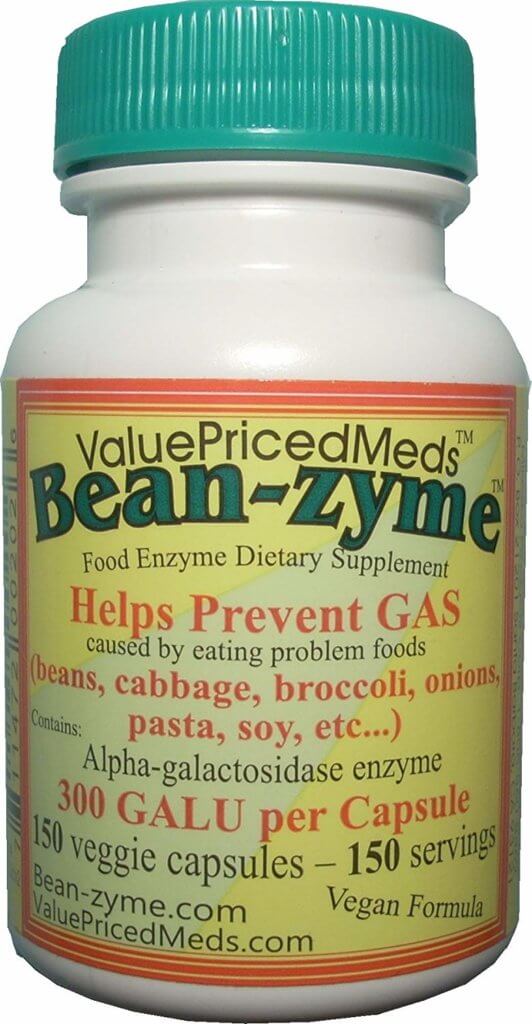 Another option that’s a bit less popular, but I’ve seen highly recommended is VegLife Peaceful Digestion. Again, you can find it on Amazon.

Both of these contain the same active ingredient as Beano, and should produce similar results for you.

Other Ways to Decrease Gas

I think it’s great to have products like the ones above if really needed, but ideally you wouldn’t have to worry about getting obnoxious levels of gas from eating.

If your gas is from eating beans specifically, there’s a few things you can do:

Even if you do both of these, eating a lot of beans will give anyone gas, but it should be much more manageable and you can gradually decrease your use of enzymes like Bean-zyme over time.