Cocoa powder is usually considered vegan by most.

If you see it as an ingredient in a food, it’s reasonably safe to assume it has no animal products in it.

Cocoa powder is made by processing cacao beans under high heat, and is typically used for baking.

Some cocoa powder does have non-vegan ingredients. Usually dairy products like milk powder.

If you’re buying cocoa powder by itself, it’s really easy to see if there are any other ingredients besides the cacao itself.

But the bigger issue for vegan is how it’s made.

While we typically think of vegan about eliminating animal cruelty, we often forget that humans are animals as well.

A lot of chocolate comes from places that use forced child labor and have terrible working conditions. If you want to learn more, here’s a well-cited overview.

It mainly occurs in West Africa, at least that’s where most documented cases of child slavery on cocoa farms come from at the moment.

For many vegans, you wouldn’t consider cocoa powder that comes from these places to be vegan, as there’s a lot of suffering.

If you just see “cocoa powder” on the ingredients list, there’s a chance that it came from workers in these conditions.

What About Organic or Fair Trade Cocoa?

Most organic cocoa comes from Latin America. So far, there haven’t been any child labor or slavery concerns over cocoa from these farms.

So, organic cocoa is pretty safe to consider vegan.

Next up is the cocoa powder with “fair trade” or “slavery free” on the label.  Most of these are legitimate, and aren’t made from products of child labor or slavery. 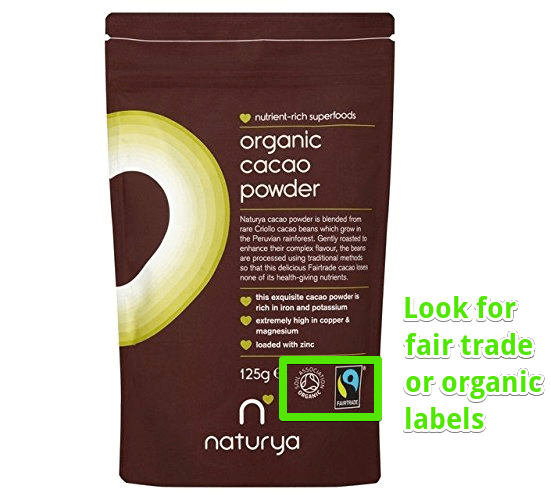 Some suppliers (from Western Africa) have tried to find a way to sell their cocoa (made from child labor or slavery) to fair trade buyers in the past, but it hasn’t been too successful as far as I can tell (based on the reports I’ve read).

So fair trade or slavery free labels, which typically go together, are safe to assume are vegan.

Recap: Which Cocoa Powder is and Isn’t Vegan

In order to be confident that your cocoa powder (or chocolate bars) aren’t products of child labor and possibly slavery, don’t buy products that just list “cocoa powder.”

Instead, buy cocoa powder that is either organic or fair trade. You can be quite confident that these were made ethically.

Yes, it will cost quite a bit more like most vegan products, but it’s worth it.

Finally, most brands that care about sourcing ethical chocolate really like to highlight it on their website and go into detail on how they source cocoa responsibly. If you’re not sure about a brand, look it up and see if you can find anything to re-assure you (or do the opposite).