And while it’s more “natural” and environmentally friendly than most other gums, Glee Gum is unfortunately not vegan.

In fact, all flavors of Glee Gum have 2 main non-vegan ingredients.

If you’re looking for better alternatives, take a look at my rankings of the best vegan gum brands. 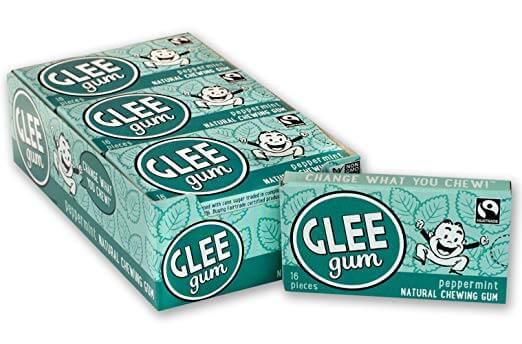 Glee Gum does a lot of things right.

It’s relatively affordable, and avoids a lot of the artificial colors and other junk that’s in most popular gum. It even has a chicle-based gum base (gums like Dentyne use a petroleum-based one).

The classic gum is sweetened with cane sugar and brown rice syrup, while the sugar-free versions are sweetened with xylitol (which is good for your teeth).

Here’s what the ingredients look like for the sugar-free peppermint flavor, the other flavors are pretty similar:

I’ve highlighted the 2 issues for us vegans.

The most obvious issue is the beeswax. While it’s perhaps not as big of a deal as some other animal products, it’s not vegan.

Secondly, the gum also has resinous glaze. This goes by many other names like confectioner’s glaze and pharmaceutical glaze. It contains shellac, a product a small insect.

Would Everyone Agree that Glee Gum Isn’t Vegan?

The 2 non-vegan ingredients come from insects.

I’m not going to lie, that’s a grey area to many vegans. However, most would say that beeswax especially is not vegan.

I’ve made my argument elsewhere that insects are animals, although it’s far from a clear answer.

If you’re okay with insects being used or killed, then you’ll probably be okay with Glee Gum. It’s your call at this point.