Glycerol, which is also called glycerine and glycerin, is a thick, sweet, substance.

It’s used mainly in food as a sweetener (that also helps preserve food), and in certain pharmaceutical products (even toothpaste).

Some glycerol is vegan, but some is not.

Where Does Glycerol Come From? 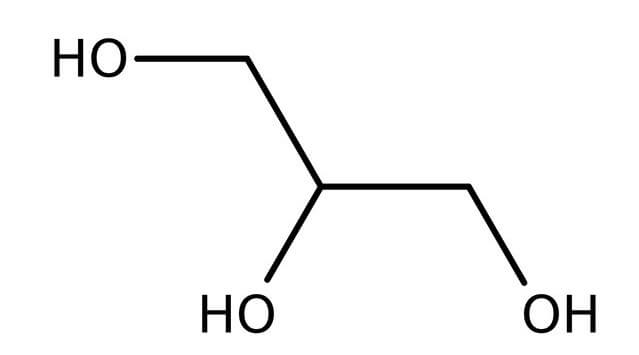 Glycerol is a substance derived from triglycerides that can be obtained from both animal sources (usually tallow – cows) and plants (mainly soybeans and palm).

It’s obvious that glycerol from animal sources isn’t vegan, but even vegetable glycerol is tricky.

Note that while it is possible to produce synthetic glycerol, it’s currently much more expensive, so it isn’t common. Perhaps one day the cost will come down and the industry will shift towards it.

Glycerol is derived from triglycerides, which can be obtained both from animal or vegetable sources. That’s why some glycerol is vegan-friendly, and some is not.

Is All Vegetable Glycerin Vegan?

Glycerin from soybeans is clearly vegan.

But palm oil is more controversial among vegans. Some argue that it is vegan, while others argue that it’s not due to the number of animals killed in the process of clearing room for palm trees.

You can see why I don’t think it is in my post about whether or not palm oil is vegan.

I’ll let you decide how you personally stand on the matter.

Most labels simply put “glycerin” on the ingredients list, but some do specify “vegetable glycerol,” which could be from soy, palm, or other plants.

If you want to be sure that the glycerol is vegan, the only definitive way is to contact the manufacturer directly and ask what type they use.

Vegetable glycerol is mainly derived from soy and palm. Depending on how you view palm oil, you may or may not want to avoid palm-derived glycerol.

How Do You Know If Glycerol Is Vegan-Friendly?

On some ingredient labels, you’ll see it clearly labelled as “vegetable glycerin” or “vegetable glycerol.” This type of glycerol could be derived from either soy, palm, or another plant source.

That type is likely vegan depending on how you view palm oil.

When you just see “glycerol” or “glycerin”, which is the most common thing to see, there’s a good chance (I can’t give you an exact percentage) that it’s derived from animal fats.

Unfortunately, the only thing you can do is contact the manufacturer to get more details. It’s a pain, and not all companies even respond, but if you want to make sure that a certain product is using a vegan-friendly glycerol, you’ll have to.