HP brown sauce is extremely popular in Europe, but can even be found in some stores in North America.

It’s made by Heinz, who also makes a few vegan barbecue sauces.

While brown sauce isn’t certified vegan, I’m fairly sure that most people would consider HP brown sauce to be vegan. I’ll go over the ingredients to show you why. 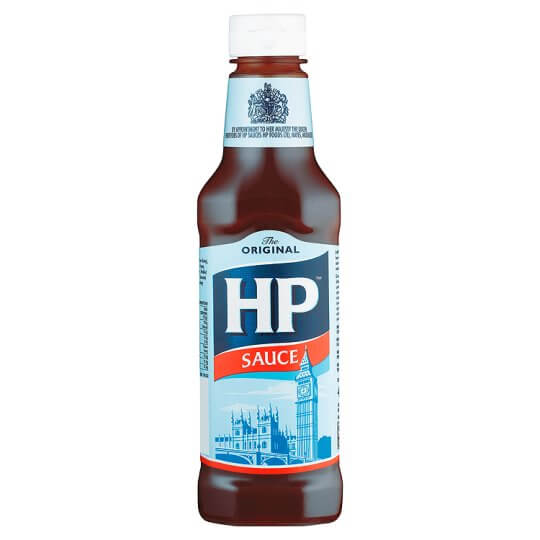 Here’s the full ingredient list (note that a few vegan spices like garlic are grouped under “spices):

Most of those ingredients are obviously vegan.

The only ones that might not be are caramel and molasses.

However, as I’ve written about in detail, caramel may or may not be vegan as it may contain dairy. I don’t think that’s particularly likely for a sauce like this, but it is possible.

Molasses sometimes isn’t because it can be made with sugar that’s filtered with bone char. In this case, since Brown Sauce isn’t made in North America, you don’t need to worry about it.

We can’t be 100% sure if the caramel or molasses is vegan.

But there’s a decent chance that they are.

If you don’t want to take any chances, then skip the brown sauce or make your own. You could also look at other HP sauces like their classic BBQ line, which doesn’t contain caramel.

Are Other HP Sauces Vegan?

While HP isn’t necessarily known for their other sauces, they do have 4 other product lines.

Let’s take a quick look at each of these.

This fruity sauce also appears to be entirely plant-based.

The only ingredient that would give me any pause is “flavorings”, which is an umbrella term that could technically contain animal-based ingredients.

For a sauce like this, it’s unlikely there’s any hidden dairy or other animal product.

As the name suggest, there’s honey in this sauce, which makes it not vegan-friendly.

The classic BBQ sauce doesn’t have any honey and has a pretty simple ingredient list:

Again, the only ingredient that gives me some pause is the “flavourings”, but it’s very likely that it’s fine.

The Reduced Salt & Sugar sauce has very similar ingredients to the other sauces.

It does contain caramel, but in this case, it lists “Plain caramel.” (E150a)

From what I can see, plain caramel is made only from sugar, which would make it vegan-friendly.

Just to wrap things up, here’s what I’d be comfortable saying at this point: