Korean food is notoriously difficult to navigate for vegans, since many dishes are based on meat or seafood.

When it comes to kimchi, some brands of kimchi are vegan, and some are not.

The more “traditional” ones typically contain some sort of fish sauce or shrimp, while the more “modern” brands of kimchi often have vegan recipes.

We’ll take a look at some of both just so you know what to look for, and go over how difficult it is to make your own vegan kimchi if you’d like another option.

Brands That Are NOT Vegan

Here’s the full ingredient list for Mother-In-Law’s Kimchi, which is fairly standard:

And finally, Jayone has shrimp and anchovies in it. 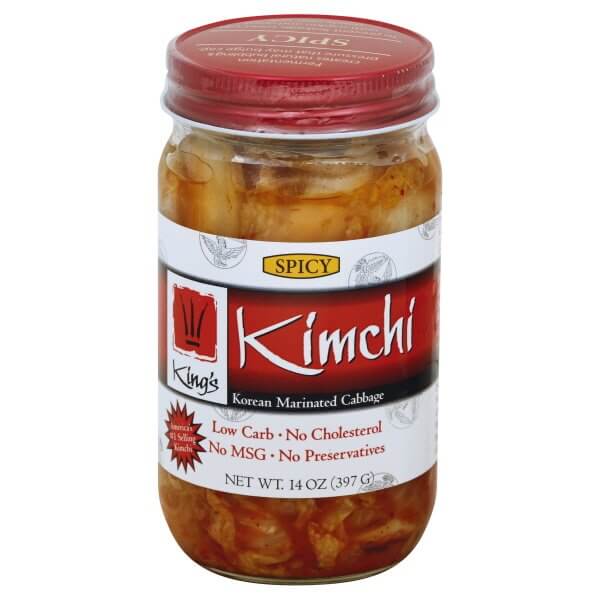 The good news is that it’s not that hard to find vegan kimchi these days, even in stores like Walmart.

Let’s start with Wang Kimchi, here is its ingredients:

It’s a very short and simple list. While some vegans might have a bit of concern over if the sugar is vegan, there’s a very good chance that this kimchi is vegan by any standard.

Other vegan brands that are easy to find include:

Is Kimchi At Restaurants Vegan?

Unfortunately, it’s more realistic to assume that if you see kimchi at a restaurant, it’s probably not vegan.

Either ask for more information on the ingredients, or give it a pass.

Most restaurants that have vegan kimchi specifically buy it and mark it as such on their menu.

How To Make Vegan Kimchi

We saw a very simple ingredient list just above, so it seems like it shouldn’t be too hard to make a good vegan version at home.

If you’re looking to replicate the traditional umami flavor, you can create a vegan fish sauce alternative using ingredients like tamari or soy sauce as a base.

It’s a decent amount of work still, but if you’re really craving kimchi, it’s worth the effort.