Traditionally, pie crust is not vegan because it contains butter, shortening, or both.

While it’s possible to substitute vegan butter or vegetable shortening and still make great pie crust, many brands do not.

Let’s take a look at some of the most common brands that you can find at grocery stores including Walmart.

Buying a “normal” pie is rarely an option for vegans because of the crust.

Most traditional recipes include:

Obviously the last part is the issue for those of us who don’t eat dairy.

While there is some shortening that is vegan, it’s not common in non-specialty bakeries.

Vegan recipes for pie crust tend to use vegan butter, coconut oil, or vegetable shortening instead. 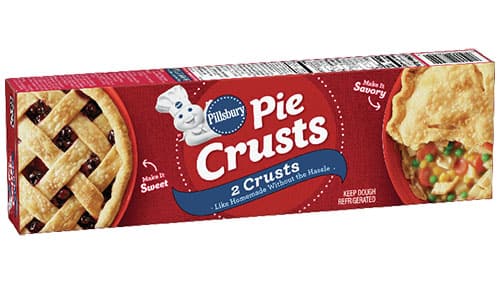 I’ve never seen a plant-based version of lard, it’s always made from animal sources of fat.

On top of the lard, there are also food colorings, which are arguably not vegan. Just pointing that out in case you see it in other crusts while shopping.

Keebler ready crust makes multiple pie crusts, which all appear vegan-friendly to me, with one big caveat: they all contain palm oil.

Let’s take a look at the ingredient list before I explain further:

Many vegans argue that palm oil isn’t vegan because of how many animals are killed by unethical industry practices. This is one of the biggest grey areas of veganism, as most vegans are fine with consuming it.

You’ll have to decide where you stand.

On top of the palm oil, there’s also sugar and molasses. Both of these are usually vegan, but can be made with bone char. You can read more about it in my post on if sugar is vegan.

After you decide where you stand on those issues it will be clear on whether or not you consider Keebler crust to be vegan. 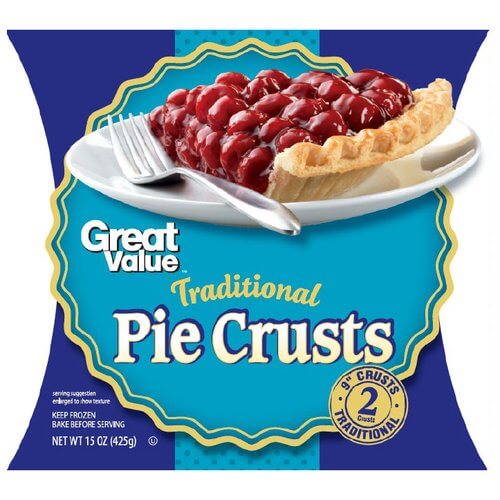 Like the Keebler crust, Great Value’s pie crust also appears to be vegan, but does contain palm oil.

One note is that mono and diglycerides aren’t always vegan, but since they are lumped in with the vegetable oils, I think it’s safe to assume that they are derived from plants.

I prefer to make my own crust because it’s fun, and it’s nice to have 100% control of your ingredients.

However, it’s also time consuming, and still not that cheap (vegan butter is expensive).

The alternative is to look for gluten free pie crusts, as these are usually accidentally vegan.

You’ll usually find them in the freezer section. If your grocery store has a “healthy” aisle, that’s likely where they will be.