While spinach may not have as much iron as certain types of meat, it’s one of the best plant-based sources of iron, especially if you’re watching calories.

Note that absorption of plant-based iron (non-heme iron) does depend on cooking method, and even what else you eat alongside of it.

In this short post, we’ll compare the iron in spinach to other vegetables, and go over how to maximize iron absorption from leafy greens.

How Much Iron is in Spinach? 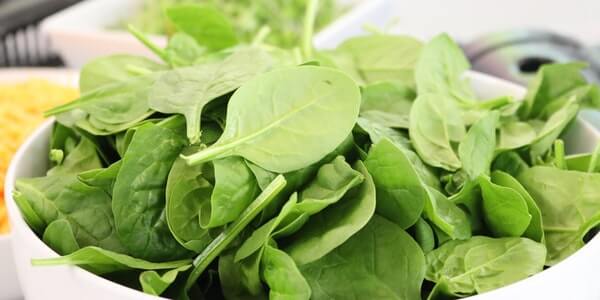 For reference, a bunch of spinach typically weighs 250 to 500 grams. A typical serving of spinach is 100-200 grams for most people.

To put those numbers into context, we need to look at how much iron you need.

According to the NIH:

These are all targets that people should aim to meet each day.

It’s clear that 1-2 servings of spinach will help people reach their iron RDA targets, but spinach is not high enough in iron to rely on alone unless you eat a ton of it.

Does Spinach Have More Iron Than Other Vegetables?

While spinach is one of the top plant-based sources of iron, there are several foods that have more iron per 100 gram serving.

For reference, the top plant-based sources of iron per 100 grams are:

If someone is trying to eat more iron and doesn’t care too much about calorie count, there are many easier options than spinach.

Spinach is the Best Plant for Iron Per Calorie

While seeds are high in iron per gram, they also have a lot of calories. It’s not always feasible to eat hundreds of grams of seeds or nuts.

That’s why mixing your iron sources can be more practical.

While spinach doesn’t have a ton of iron per 100 grams, it is the best plant-based iron source on a per calorie basis.

The next closest sources of plant-based iron per 100 calories are:

An adult man can get more iron than their RDA with just 100 calories of spinach. Even though that’s a relatively high volume of food, spinach is a great inclusion to any high iron diet.

Is Spinach Good For Correcting an Iron Deficiency?

Iron can come in 2 forms: heme (from animals) and non-heme (from plants).

Even though it has non-heme iron, it can still be helpful at preventing or fixing a deficiency if you eat vitamin C alongside it. Studies have shown that it can improve iron absorption up to 3 times as much, which is more comparable to heme iron.

It’s also important to note that correcting an iron deficiency can take weeks or months, regardless of whether you’re getting iron from foods or an iron supplement.

One final thing that you may come across is that spinach is relatively high in oxalates.

Oxalates are “antinutrients” that can impair the absorption of certain minerals.

…Our findings strongly suggest that OA (oxalate content) in fruits and vegetables is of minor relevance in iron nutrition.

The one exception is that oxalates can contribute to kidney stone formation in certain people.

Doctors will tell some patients with a history of kidney stones to avoid high oxalate foods like spinach, but for most healthy people it’s not a big concern.