All types of whey protein are not vegan.

However, they are vegetarian for the most part, unless there’s a vitamin or mineral added that’s animal-based (e.g. vitamin D).

While whey protein may not be vegan, I’ll go over plant-based alternatives that are just as good shortly.

What Is Whey Protein Made From?

Milk has two main types of protein in it:

Both of these are extracted during the cheese making process. Whey is a liquid that is removed after the milk coagulates (i.e. thickens, clumps).

How Is Whey Protein Made?

That whey product can then be dried to make a protein powder.

Note that whey isn’t 100% protein, there’s a small amount of lactose usually in it still, which is why people who are lactose-intolerant generally shouldn’t use whey protein powders.

Depending on the exact process used and when the whey is removed, the resulting whey is generally described as one of three forms:

On top of having a higher protein content than the concentrate form, whey protein isolate usually tastes better as well.

Research has shown that commercial whey protein concentrate develops a “stale whey” off-flavor, mainly due to the higher fat content, as seen below in the table. 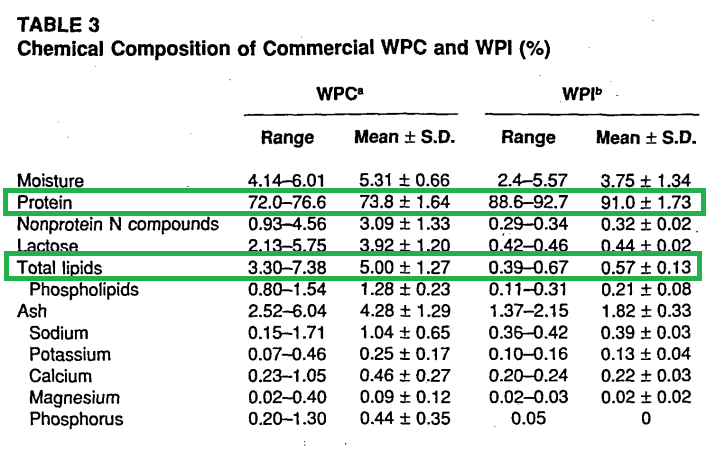 Whey protein isolate is by far the most common type of protein powder sold. However, other forms of whey are often used in packaged food products.

There is no whey protein in the world that is vegan. It is always derived from milk, which is not vegan-friendly because it’s an animal product.

That probably seems obvious at this point, but I wanted to be crystal clear.

Any type of lacto-vegetarian will drink milk, and there are no other animal products added to the cheese-making process early on, so it seems like all whey protein should be vegetarian.

The vast majority of whey supplements are vegetarian friendly, but not all of them. In particular, some products that are “all-in-one” shakes are fortified with vitamins and minerals that might come from animal sources.

In short, vegetarians should always look for a “vegetarian” certified sticker if they’re buying a whey protein product if they want to be sure about it.

The majority of whey protein supplements are considered suitable lacto-vegetarian, but some do have added vitamins that come from animal sources (most notably vitamin D).

Thanks to technology, we can extract protein from almost any food source, even if some are easier than others.

The most common plant-based alternatives to whey that you’ll find in supplements are:

There are others like peanut, chia, and pumpkin seed protein, but those are hard to find by themselves. Instead, they are just added to products in small amounts.

Whey protein is considered the gold standard of protein. In particular whey protein isolate is a complete protein that absorbs quickly, perfect for a post-workout shake.

However, studies show that in practice, plant-based protein powders are just as effective at building muscle.

Here’s a quick summary with links to 3 studies that I found comparing whey to plant proteins:

Those are just a few studies, but it shows the common sense result so far that even if plant proteins are slightly less digestible, they’re still more than enough to meet basic muscle-building demands.

There are several NFL and NBA players who have experienced benefits to their performance after going vegan. If those giant guys can get by on vegan protein sources, it should be good enough for just about anyone.

Current research suggests that any difference between whey and plant-based protein powders is minimal.

In other words, you couldn’t meet the minimum thresholds for all essential amino acids if you only consumed that particular protein.

For example, when comparing whey vs hemp protein, the main difference is that hemp isn’t quite a complete protein because it’s relatively low in lysine. 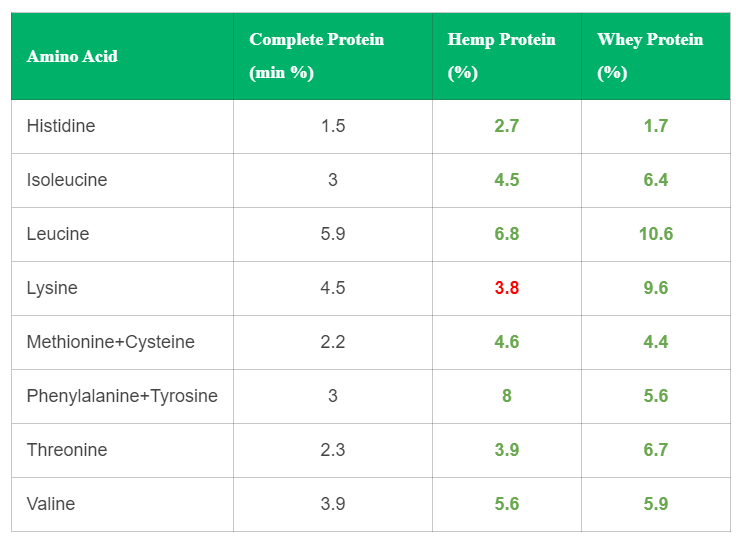 It turns out that this doesn’t really matter in practice, because you’ll be eating other foods that have whatever amino acid is missing. No one should be consuming 100% protein powder for their diet.

Dr. Greger has a good video on the protein combining myth that just won’t seem to die.

Even if that mattered, most vegan protein powders have a blend of protein sources and are complete proteins by themselves.