This is a good news and bad news situation.

Many K cups are vegan, but some are not.

To make life more complicated, the ingredients are usually only listed on the box itself, not the individual cup containers.

That makes things especially difficult if you’re used to grabbing a K cup at work or from a friend.

There are literally hundreds of unique K cups, so I haven’t created a list of all of them, but I’ve compiled the most popular ones and whether or not they are vegan.

It should help you be more confident on which ones are safe for vegans or not.

Which K Cups Are NOT Vegan?

Most K cups are literally just make from coffee beans, and then you can add whatever you want.

But there are 2 common issues that can cause K Cups not to be vegan-friendly: 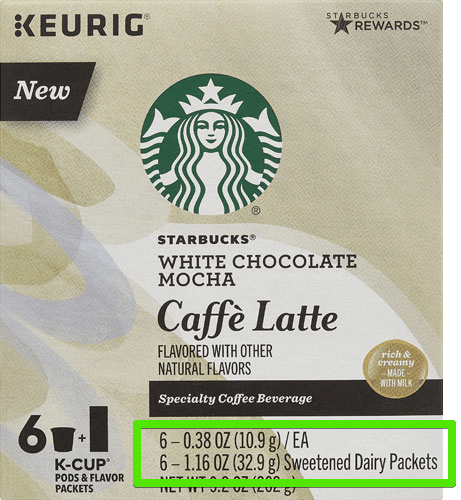 The packets are separate from the cups themselves, but it’s a package deal, so most vegans wouldn’t be comfortable buying them.

Inside the packets are:

The dried milk clearly makes it not vegan.

The second potential issue is that many of the flavored K Cups have “natural flavors” in the ingredients.

These may very well be vegan, but there’s no way of knowing.

Companies are allowed to put many ingredients in “natural flavoring,” including many animal products.

From the official regulations, here’s the most important part:

I don’t think it’s safe to assume that while some K cups with natural flavoring added are vegan friendly, most probably are not in this situation.

In general, steer from cream or caramel flavors at the very least.

Summary: Most basic roasts consist only off coffee and are vegan friendly. However, latte K cups and flavored K cups may or may not be vegan, so avoid them unless you can see the full ingredients or contact the manufacturer for specifics.

Popular K Cups That ARE Vegan

If you’re looking to stock up on K Cups, there are quite a few popular options that are clearly vegan friendly.

Here’s a list of those brands and specific cups: