It’s an exciting time, as lab grown meat has potential benefits when it comes to cost, health, sustainability, and ethics.

We’ve compiled a detailed list of industry statistics here that we’ll be continuing to update as the industry develops.

Because the lab grown food industry is still in its infancy, different research agencies have wildly different estimates of how big the industry currently is.

What they have in common is that all of them predict massive growth over the next decade. There are already over 30 lab grown meat companies with proof of product that are racing to develop a commercially viable launch.

Without any large commercial products, it’s hard to get a grasp on price, but there are a few benchmarks available.

The first lab-grown burger cost $330,000 to create back in 2013, but the reported costs have been decreasing since then.

Eventually, once operations are refined and scaled up, lab grown meat will almost certainly be cheaper than “real” meat. It cuts out much of the time, labor, land, and food (for animals) that is involved in traditional farming.

For reference, beef costs on average about $0.5 per 100 grams, so lab grown meat is starting to get close.

There’s no point in developing a product if no one will use it.

However, while it does vary by country, the overall opinion about lab grown meat is generally positive.

One study found that 80% of people in the US and UK are willing to at least try lab grown meat, with 40% responding that they are highly likely to try it. 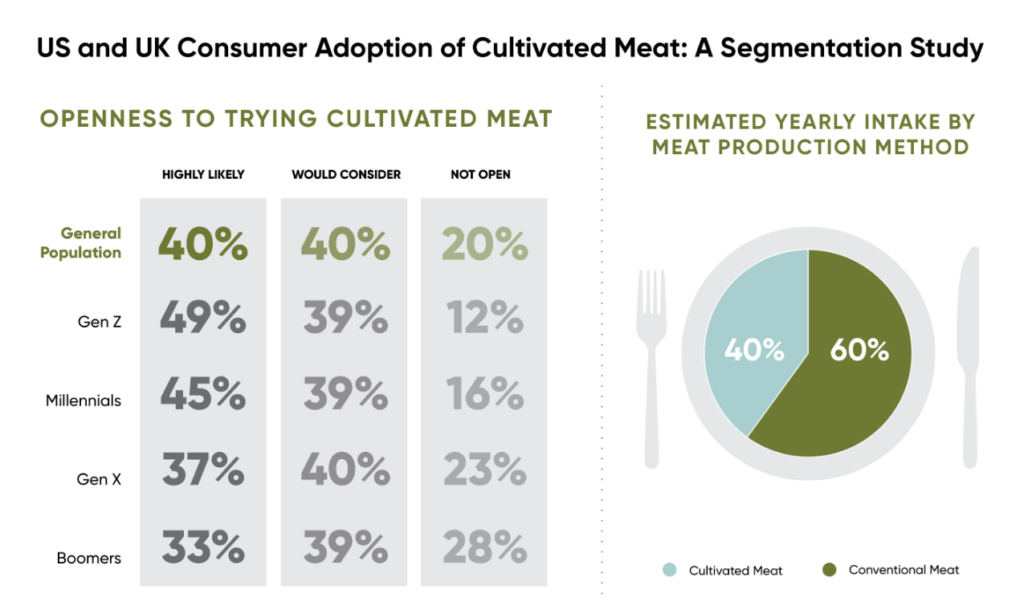 A survey of Chinese citizens found that most people don’t have strong opinions either way yet. It found that 19.9% would definitely be willing to try it, while 9.6% would be unwilling to try.

The biggest finding in that survey is that 87.2 percent were interested in the prospect of paying less for it than conventional meat.

The main concerns in these studies from people hesitant to try lab grown meat revolved around:

What’s the Effect of Lab Grown Meat on Emissions?

One of the biggest benefits of lab grown meat is the positive impact on the environment that it can have compared to traditional meat.

In addition, lab grown meat also uses 82-96% less water than its traditional alternative, which can be important in some locations.

How Many Cells Need to Be Grown For Meat?

It’s hard for most people to comprehend the biological makeup of food like meat.

In order to produce a small piece of lab grown muscle tissue, more than 1 trillion cells need to be grown. These naturally merge into myotubes.