Lentils and beans are both similar, but have a few differences:

When you switch to a more plant-based diet, it’s a big change.

Protein is a bit harder to come by, the gas can be crazy at first, and you need to consider where you’re getting your nutrients from.

While lentils are legumes, just like all other beans, most tend to think of them as their own sort of food. They share a lot of similarities with beans, but also have some fairly big differences.

I’ll walk you through the most important differences so that you can get the most from your diet.

Are Lentils A Bean?

While lentils and beans are both legumes, lentils are not beans.

Both beans and lentils come from the plant family Fabaceae, but belong to different genera and species.

You can sort of think of lentils and beans as cousins. They share a common ancestor, but are in fact not the same specific type of vegetable.

Do Lentils or More Beans Give You More Gas? 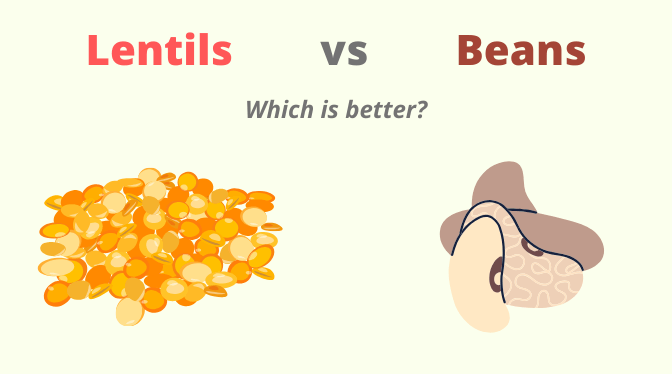 There are 2 main reasons why legumes give people gas:

While you’ll eventually get used to the fiber, a large increase in fiber intake will cause stomach issues for most.

Fiber in Lentils and Beans

Let’s look at the numbers:

It varies a lot based on the type of bean you’re looking at. But other than soybeans, lentils have more (or as much) fiber as any common bean.

Oligosaccharides in Lentils and Beans

This is actually the bigger issue, since you’ll get used to the fiber pretty quickly.

Oligosaccharides are a type of sugar that’s hard to digest. So instead of easily getting absorbed in the stomach or small intestine, they mostly don’t break down until the large intestine. The fermentation process that breaks down these sugars in the large intestine emits gas.

It’s not quite as easy to see data for this, but I found a few studies that had some.

First, this study found that both pardina (brown) lentils and soybeans both have about the same amount of oligosaccharides.

However, red lentils have about 30 percent more oligosaccharides per gram. If you’re worried about gas, avoid red lentils, or eat a smaller serving.

Another study found that lentils had the least amount of oligosaccharides (they didn’t look at soybeans in this one), followed by:

If you’re really having stomach issues, you should be soaking your beans.

Soaking reduces not only oligosaccharides, but also “antinutrients,” which bind to certain nutrients and prevent you from getting the full nutritional value from your legumes.

The second study from above looked at the effect of soaking legumes for 16 hours. Here are the results we’re interested in:

For most legumes, the change was around 30-40%, but white beans respond particularly well to soaking, while chickpeas don’t.

Soaking legumes reduces oligosaccharides and other antinutrients by up to 67%, which will reduce the gas they cause you. Note that canned legumes are not soaked, so you’ll have to buy dry legumes and soak them yourself.

Protein Comparison of Lentils and Beans

Legumes are every vegan’s main source of protein.

Here’s how much protein you get in a cup of a variety of cooked legumes:

Excluding soybeans, which most people don’t eat directly (rather in tofu form), lentils are better than every other type of bean when it comes to protein.

Considering you might eat 3-4 cups of legumes on some days, that could be an extra 15-20 grams of protein, which is nothing to sneeze at.

The amino acid profile for beans and lentils are quite similar for the most part. Soybeans have the most balanced profile, but again, aren’t a common bean in most recipes.

Soybeans are by far the best when it comes to protein content and amino acid profile. But, lentils have more protein than other types of bean by a small, but significant amount.

Nutritional Value of Lentils and Beans

All legumes are fairly nutritious, and just a few cups can exceed the recommended daily value for many nutrients.

Take a look at this comparison table for the main types of legumes:

Lentils overall have more nutrients than the other beans I compared them to above.

This includes the more important nutrients like iron and zinc that many people on plant-based diets (particularly vegans) are deficient in.

While it’s not a huge margin in most cases, lentils give you the most vitamins and minerals.

For the most part, lentils and beans share most things in common.

Personally, I just try to get a good variety of legumes.

However, if you’re trying to pick one legume to focus on, the winner is lentils.

You might also be interested in my comparison of legumes vs nuts. And if you want to see some more detailed comparisons, see my posts on kidney beans vs pinto beans, and pinto beans vs black beans.

Or, if you’d like to see an overall comparison of all beans, see my bean nutrition comparison page, which has a simple comparison table for protein, calories, and other nutritional information.