The only reason that I wrote this post was because I saw a few others saying that this cereal is vegan.

I don’t think it’s quite so straightforward, and I think newer vegans that might be looking this up should get the whole story before making up their minds.

There are a few ingredients in Life Cereal that are controversial among vegans. Some vegans argue that it’s unreasonable to avoid them, while stricter vegans disagree.

Let me quickly walk you through them and then you can decide for yourself. 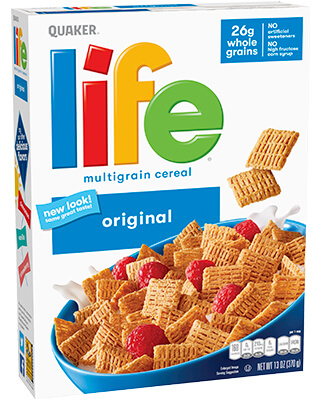 Life Cereal comes in a few different varieties, but the ingredient lists are virtually the same.

Let’s just look at the ingredients in the Original flavor:

I’ve highlighted both the sugar and artificial colors (yellow 5 and 6), these are the main ingredients I’m concerned with, even though they look innocent enough on the surface.

When you see “sugar” on the ingredient label, it refers to plain white sugar.

In many places around the world, it’s vegan.

However, in North America, where Life Cereal is made, white sugar is often processed with bone char to make it as white as possible. The bone char is made from the bones of cows, which is why some plain sugar isn’t vegan.

In this case, we don’t know if this sugar is made with bone char. But for big cereal companies with multiple sugar suppliers, there’s a good chance that at least one uses bone char. If you still want to take a risk on the sugar, that’s your call.

These are synthetic, as the name implies. They’re made in the lab with no animal ingredients.

The problem is that there are safety concerns about the most popular ones (e.g. red 40, yellow 5, blue 1, etc.) in North America (banned in most European countries). This leads to constant animal testing trying to prove that they’re safe or not safe.

Are Other Flavors of Life Cereal Vegan? (Cinnamon, Vanilla, etc.)

All the other flavors of Life Cereal besides original have almost identical ingredients.

On top of the 2 issues we saw above, the one other concern that you might have are the “natural flavors”.

In some cases, natural flavors aren’t vegan (since they can contain both plant and animal ingredients). In this case, since the label also says “CONTAINS WHEAT INGREDIENTS”, they should be fine. I just wanted to point them out in case you saw them later and were concerned.

Summary: Why I Don’t Think Life Cereal Is Vegan

Personally, I don’t take chances on “sugar” when I see it. I also don’t consume artificial colors.

I’m what you would call a “strict” vegan for the most part.

But veganism comes down to your own personal definition of what’s reasonable to avoid.

You’ll need to decide for yourself where you stand on these issues, and that’s why I explained them.

It’s a good idea to figure these things out now, as you’ll see artificial colors and sugar in many other products, especially cereal (e.g. Fruity Pebbles).