We all live in information bubbles.

The latest Canada’s food guide update even recommends eating more of a plant based diet and lowering meat consumption (1).

But are people really embracing veganism, and is it making an impact on things like the meat industry?

It’s a difficult thing to measure for many reasons, but surveys can give us decent data to form opinions on.

There’s data on most large countries, but very little on vegans in Canada.

I conducted a survey to find out more about the diets of Canadians, and ended up with 1,559 responses from across the country (detailed methodology at the end of this post).

It was a very simple survey, with only a single question that asked “Which of the following, if any, best describes your eating behavior?”:

Here are the results.

The Percent of Vegans and Vegetarians in Canada (Overall)

This is the main finding of the survey.

With 1,559 responses, we have a decent sample size and margin of error.

Not surprisingly, most people are not vegetarians of any kind (I grouped “none of the above” responses in with omnivores). 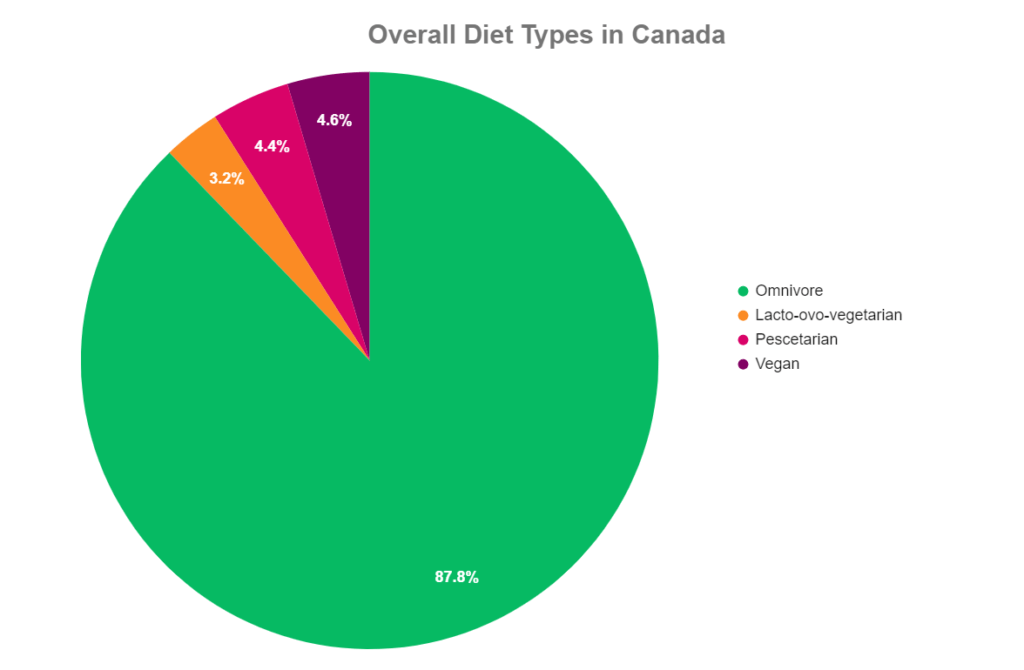 When you combine those smaller groups, you’ll find that about 12.2% of Canadians are some kind of vegetarian or vegan.

How Many Vegans Are In Canada?

There are approximately 1.7 million vegans in Canada based on the results of this survey. Additionally, there are just over 2.8 million Canadians that primarily identify their diet as vegetarian.

Are Plant-Based Diets in Canada Increasing?

There’s been one other major survey about Canadian eating habits, that was done in 2018 by Dalhousie University researchers.

It looked at more than just overall diet type, but that’s all we’re really looking at here.

The percent of Canadian vegetarians went up a small amount, but the number of vegans nearly doubled over this time period (~16 months).

Before getting too excited, I should mention a few caveats:

It definitely seems like more people are going vegan, but to conclude that the number of vegans has doubled in a relatively short time period seems unlikely.

To deal with the first issue, I’d like to make this survey a more regular thing to track results over time.

Vegans and Vegetarians in Canada By Gender

This was the most interesting result to me.

That may apply in other countries, but it doesn’t seem to here.

There were more females of both main types of vegetarians.

However, 5.6% of males responded that they ate a vegan diet, compared to 3.6% of females.

Anecdotally, this seems reasonable to me. Whenever I go to vegan food festivals (in the Toronto area), it’s approximately a 50/50 split.

Veganism and Vegetarianism in Canada By Age Group

When looking at age groups, the results were pretty much as most would expect.

Younger people are more vegan in general, with an impressive 7.5% of 18-24 year olds responding that they ate a vegan diet.

Interestingly, the number of vegetarians is fairly steady throughout age groups.

Vegans and Vegetarians in Canada By Region

There weren’t enough replies to look at results by province, but there’s a reasonable sample size for more standard regions of Canada:

Here were the results:

Quebec led the way with 6.9% of respondents selecting a vegan diet.

Ontario and British Columbia had similar levels of overall vegans and vegetarians, both significantly more than the Prairies and Atlantic regions.

There wasn’t enough data to look at vegetarians and vegans in cities themselves. So while the bigger, more “progressive” cities like Toronto and Victoria likely have a bigger scene, we don’t have the data to back up that claim.

This survey was conducted through Google Surveys. You can read about their methodology here.

It uses a combination of surveys sent through websites and mobile applications. That makes it skewed towards people who use the Internet, although that shouldn’t be a large effects these days (but perhaps significant for older age groups).

A few other notes:

Still, while there are limitations, I think the results are interesting and largely significant.

There is ambiguity in some areas, but overall, the number of vegans in Canada does appear to be increasing significantly. We’ll see if this trend continues into the future.

However, that doesn’t necessarily mean that meat consumption is lower, since the population is also growing.