There are a few reasons that you should generally limit the amount of oils you consume.

One of those reasons is that most oils have a terrible omega fat ratio. A poor ratio of these key unsaturated fats can lead to inflammation, which can increase the risk of several health conditions.

We’re going to look at the specific omega 3 to 6 fat ratios of just about all plant-based oils here.

All data in the table below comes from the USDA’s food database per 100 grams of each oil.

The fats don’t add up to 100 grams, even though oil is basically 100% fat in most cases, because these oils contain other types of fats as well (i.e. saturated, monounsaturated).

Only 3 of those oils meet that minimum threshold. In some cases, like olive oil, there aren’t that many omega fats in total, so the poor ratio isn’t that big of a deal.

However, you wouldn’t want to be eating sesame or grapeseed oil in large quantities.

The Ideal Ratio of Omega Fats in Oils

While the effects of omega fats on our health is complex, the easiest way to look at what sort of intake you should aim for is to base it on historical consumption.

The graph below shows the relative levels of omega 3 and 6 fats in human diets over a large time span (source). You can see that people historically had a diet with an omega 3 to 6 fat ratio of about 0.5 to 1. 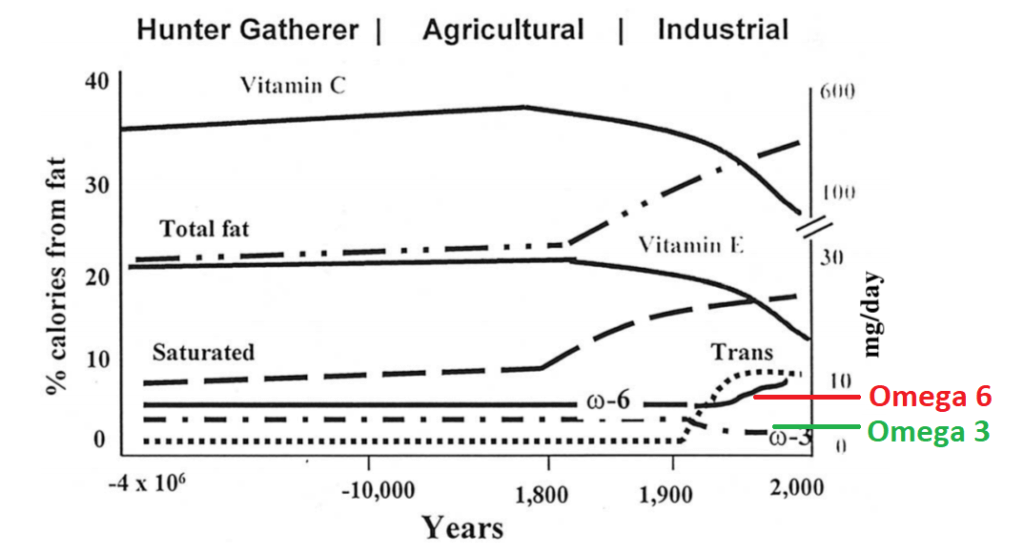 The drastic worsening of the ratio and amount (of omega 6) recently isn’t due to people eating more seeds and nuts, it’s due to adding large amounts of oil while cooking almost everything.

It’s tough to balance out a large amount of omega 6 fats unless you regularly take an omega 3 fat supplement.

In practical terms, most people should look to limit their consumption of oils, and instead look to get omega 3 fats from seeds and fish (diet permitting).

Other Factors That Affect How Healthy An Oil Is

There are other aspects of oil that can affect your health, either negatively or positively.

One of the biggest aspects is how refined an oil is.

Oils are refined to remove impurities and free-fatty acids, which removes most of the nutritional benefit, but increases the shelf life and smoke point.

Refining oils also leads to a more consistent color and lighter odor, which can be desirable for manufacturers.

The main data we looked at above beg the question:

Should you only eat flaxseed oil?

While flaxseed oil is a great idea for raw foods, it’s a terrible cooking oil.

Unrefined oils generally have low smoke points. When an oil is heated above its smoke point, it begins to break down and form harmful compounds. These aren’t fully understood still, but even breathing in the fumes are linked to certain cancers.

And obviously the oil can catch on fire as well (pro tip: smother grease fires with a lid, do not throw water on them.

Wikipedia has a great table of oil smoking points. I’ve reproduced part of it below for convenience:

There are a few things of note: