Pea protein is the main ingredient in most plant-based protein powders, and is starting to be used in many other foods.

It’s true that pea protein does cause an insulin spike, and a temporary elevation of blood sugar. However, it’s important to note that just about all food causes insulin to rise, it’s how carbohydrates, fats, and proteins are metabolized.

For a healthy person, this is nothing to worry about. However, people with health conditions like diabetes do need to carefully monitor the status of their blood sugar and insulin. Even though pea protein is still fine to consume for the majority of those people, they should consult their health care provider first to get the okay.

The Effect of Pea Protein Powder on Glucose and Insulin

There’s not too much research on this topic, but there is some we can look at.

A study conducted by Nutralys (who makes pea protein products), which obviously could be somewhat biased, did look at how pea protein affects both glucose and insulin responses.

They had 3 test groups who consumed one of the following on 3 consecutive days:

What they found was that the more pea protein consumed alongside glucose, the less that blood sugar rose, and the more that insulin rose.

This is a pretty common result from consuming protein alongside a high glycemic carbohydrate like glucose.

Even though the insulin spike was slightly higher as more pea protein was consumed (this is partly due to consuming more food), this isn’t necessarily a bad thing since blood sugar also rose less. Typically, having a smaller blood sugar peak is a good thing.

Pea protein will trigger a significant spike in insulin, but has a mitigating (or low) effect on increasing blood sugar levels.

Effect of Whey vs Pea Protein on Insulin and Blood Glucose

There’s one other study that tested both whey and pea protein samples side by side that I’d like to quickly summarize here.

The main finding that we’re concerned with is that pea protein and whey protein had very similar impacts on blood sugar and insulin. 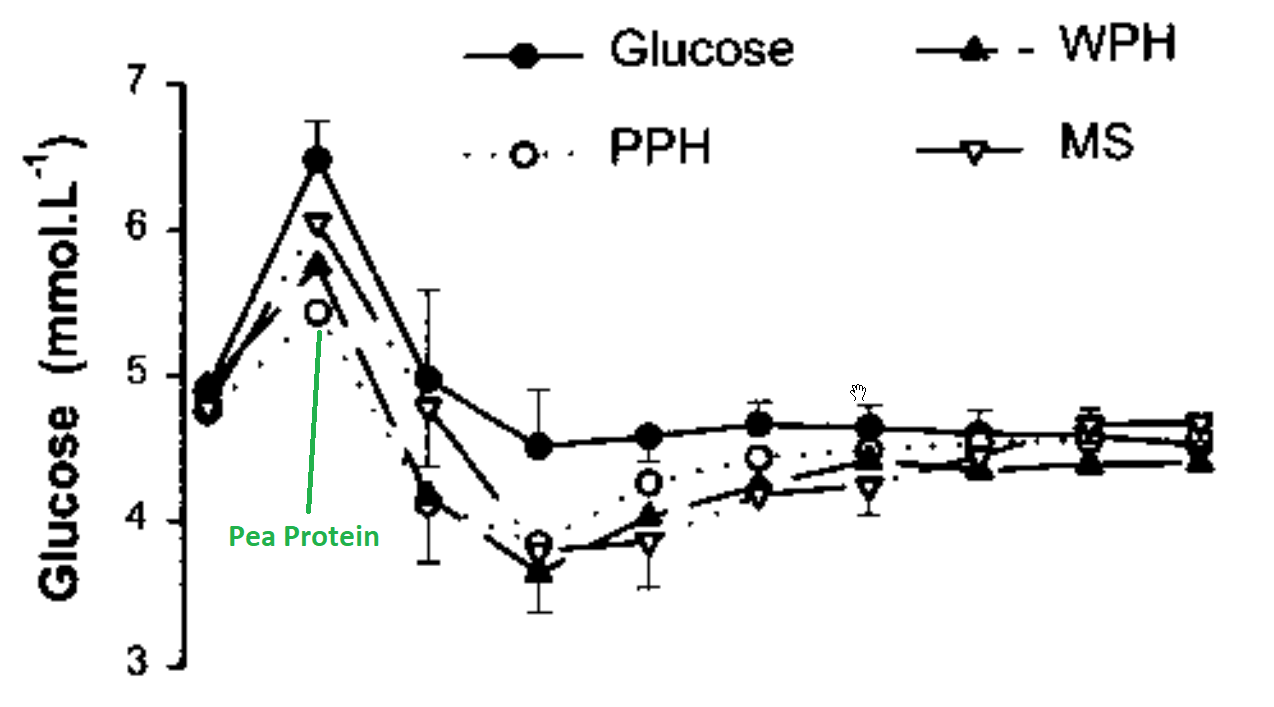 Just as the study before showed, both whey and pea protein caused the biggest spikes of insulin, although they quickly returned to baseline levels.

In other words, the protein was absorbed quickly, which is what most people who are drinking a protein shake after a workout are looking for.

There isn’t a huge difference between the effect of pea and whey protein powder on blood sugar and insulin levels. However, pea protein does spike glucose levels slightly less, which may be important for people with certain health conditions.

But all food with any nutrition does. It’d be more concerning if it didn’t, because that would indicate that someone is insulin resistant.

As carbohydrates, fats, and proteins are broken down in the digestive system, it’s insulin’s job to facilitate their movement and absorption.

When it comes to health problems, insulin and blood glucose levels are often related.

People with high levels of insulin resistance have trouble dealing with spikes in blood glucose, as the glucose can’t get out of the blood stream.

That’s why foods high in protein and fats are usually a big part of a diabetic diet. As we’ve seen, pea protein powder doesn’t cause a large change in glucose compared to carbohydrate-rich foods.

Protein still usually causes some spike in blood glucose due to gluconeogenesis (the conversion of protein to glucose), but this varies based on several factors.