While some vegans are against owning pets, most agree that giving an animal in need a good home and love is a good thing.

I love my 2 cats, but it’s a bit strange for a vegan to have to feed their pets animal products (really hoping lab grown meat progresses quickly).

While I think there’s justification for a vegan owning cats, which I’ll go into later, I would likely get a pet that’s a herbivore (or omnivore that can eat a vegan diet).

To save you some time, I created comprehensive lists of animals that can and can’t follow a vegan diet and be healthy.

Important note: Many of these animals aren’t “typical” pets. Many are prey animals, which means they’re cautious by nature. You need to be gentle and considerate of their needs. Some need much more space than you would think as well.

Do your research before getting a pet.

Finally, before we get to the lists, please don’t buy a pet from a pet store. These typically come from breeders with all sorts of unethical practices. I strongly encourage you to get an animal from a shelter or rescue.

Most of the animals on this list are herbivores, while the rest are omnivores who can thrive on a vegan diet.

They’re generally in order from best to worst in terms of being pets for the average person. 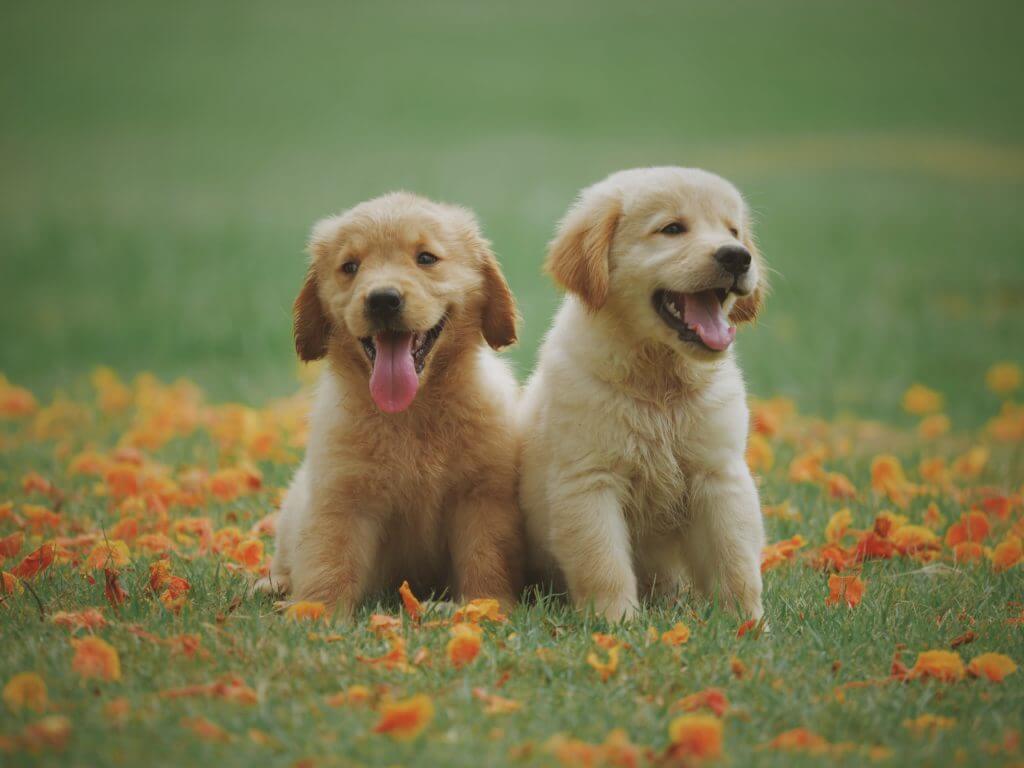 Dogs are obviously great companions. They love us, we love them – it’s a perfect match.

And while there’s still some stigma around having a vegan dog, the research keeps piling up showing that vegan dog food is safe.

You should still consult with a vet because there are a few things to be aware of, but know that dogs can not only be healthy, but thrive on a vegan diet. It’s sometimes prescribed for dogs that have reactions to certain animal products. 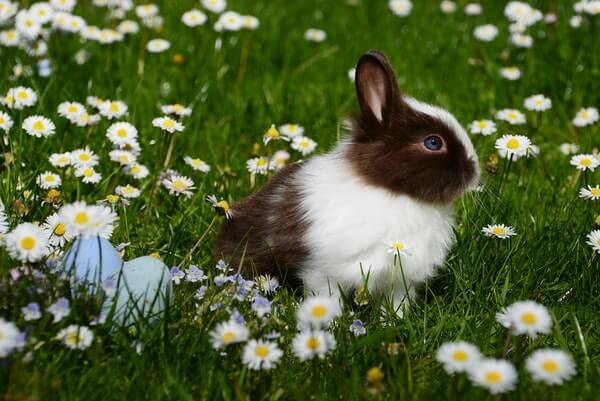 I’ve heard a lot of people call rabbits “vegan cats.” That’s not very accurate, but they can be great animal friends, and have a lifespan of 7-10 years in most cases.

Their diet consists of mainly hay, plus some vegetables.

However, be aware that rabbits are fragile, you can’t flip them around like you might play with a cat. Rabbits do not always land on their feet and often suffer broken legs or backs after being dropped (typically by children).

They also take a decent amount of work. You can’t just plop them in a cage and leave them (if you want them to be happy).

So while rabbits can be great pets, do your research first. 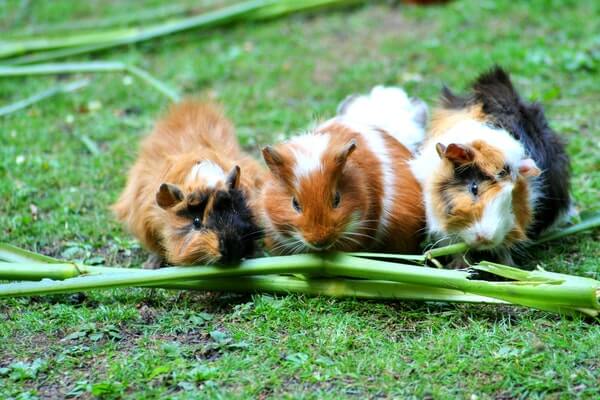 It’s illegal in Switzerland to only have a single guinea pig (you must have at least 2), so plan on getting multiple.

They also need a lot more space than their small size would suggest.

Again, do your research, because guinea pig care is a lot different than many think. 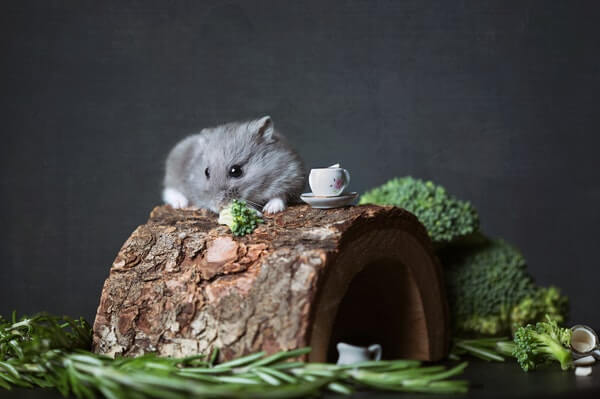 These super cute little guys are fun to watch and play with, and are generally low maintenance compared to the pets above on this list.

However, they only live 1.5-2 years, and often die before they reach “old” age. Hamsters are prone to being frightened and can have heart attacks.

They aren’t good pets for children, even though hamsters and gerbils are commonly given as gifts.

On top of the danger to the animal, hamsters are usually active at night (bad for kids who want to play with them during day time).

Finally, it’s hard finding a vet for hamsters, as they are considered an “exotic animal” (only certain vets see them). It can be done, but expect to pay more. 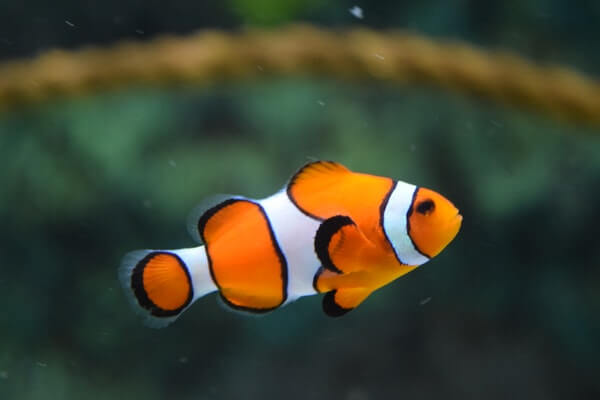 Fish can be herbivores, omnivores, or even carnivores depending on the species. They are also better pets than many think, and can be quite playful.

I don’t know much about fish, so I can’t tell you much more than that, but any good fish store will be able to help you identify the best species for you. 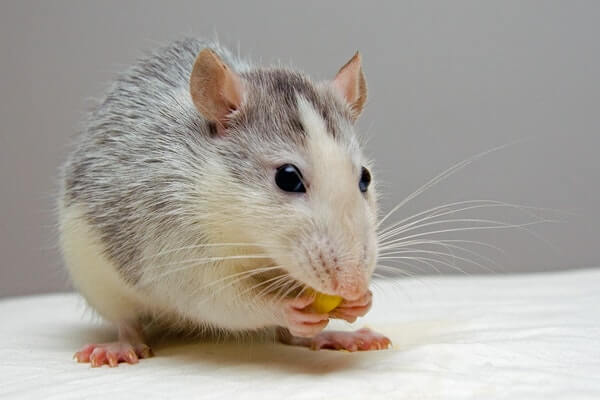 Not everyone agrees, but I think both mice and rats are adorable.

Mice and rats are both omnivores, but typically prefer plant foods like seeds, grains, fruits, and nuts.

You can feed them a vegan diet and they’ll be quite happy.

Both animals are quite small, and therefore you have to be quite careful around them. Additionally, particularly for mice, you may have a hard time finding them if they escape the habitat you set up for them.

Again, these are animals that easily startle and are not good for children. 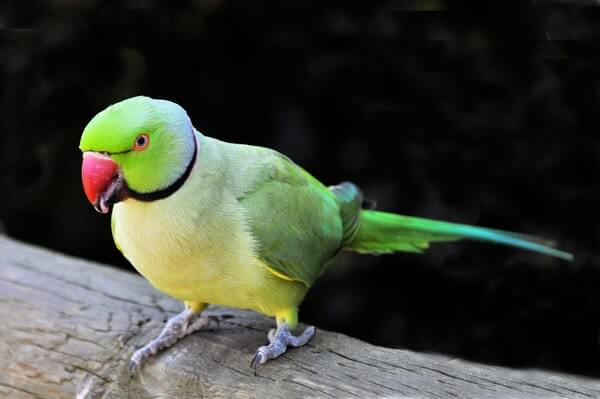 Keeping birds inside seems like a pretty grey area to me, but I’m not a bird expert.

And some birds clearly are good companion animals, so it may just depend on the species.

While each bird is different, most eat plant foods like fruits and seeds.

Unlike hamsters though, chinchillas can live for several years.

Finally, they’re quite messy. Chinchillas poop a lot, and hay will end up throughout your place. As long as you’re okay with cleaning up frequently, they can be a really fun pets. 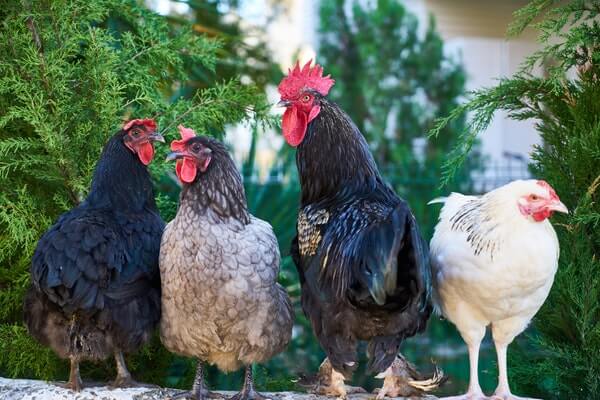 I wasn’t sure if I should include them, but in a specific setting, chickens can be great pets.

They can be very curious and friendly animals (plenty of YouTube videos showing this), and it can be rewarding for a vegan to take care of an animal that has suffered so much from human meat eating.

The one caveat is that chickens are mainly outdoor animals that require quite a bit of space. And while they can live happily on a vegan diet as omnivores, they will likely still eat insects and possibly small animals they find outside.

Pets That Can’t Be Vegan

How can I be vegan and have 2 cats?

I certainly don’t enjoy feeding them animal products, but logically there are a few ways you can see this:

Again, I don’t feel great about it, but I don’t think it’s hypocritical of a vegan to have a carnivorous pet (particularly if they’re neutered).

Still, If I had to get another pet today, I wouldn’t get a cat.

The animals below are obligate carnivores, meaning they have to eat meat to be healthy. 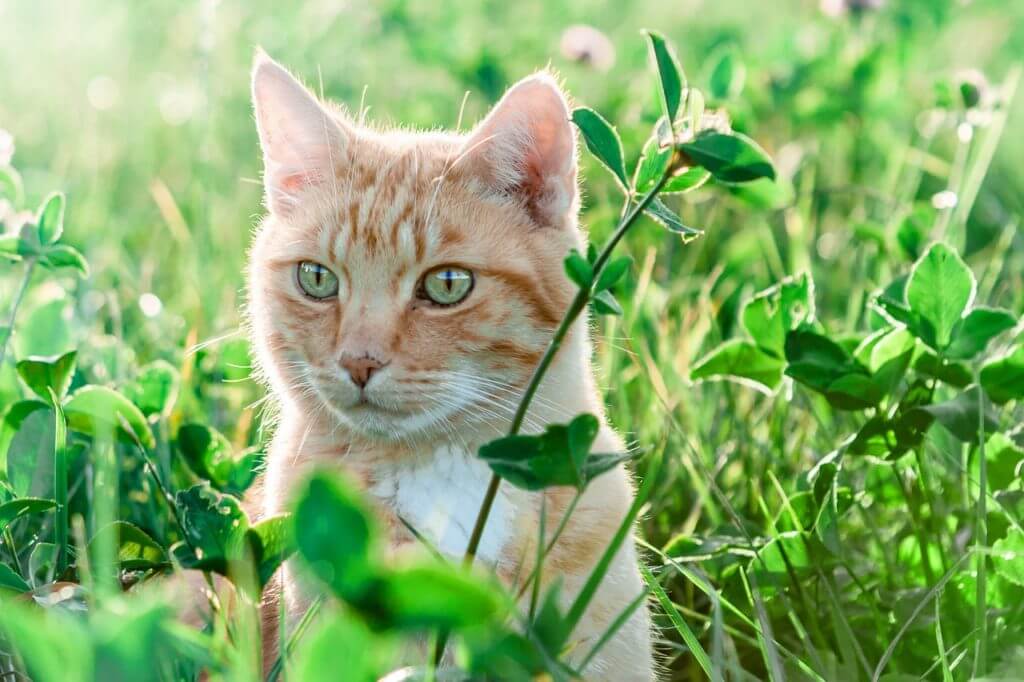 Don’t trust everything you read.

The fact of the matter is that current research does not support cats eating a vegan diet. It’s considered animal cruelty (by law) in some countries to feed a cat a vegan diet).

I’m not saying it’s impossible one day, particularly with advances in technology, but you can’t in good conscience feed a cat a diet in which they’re expected to be less healthy (and can potentially die from).

You’d be better off letting it go wild.

They also eat 8 to 10 meals a day and are pretty high maintenance.

Not exactly a great pet for a vegan. 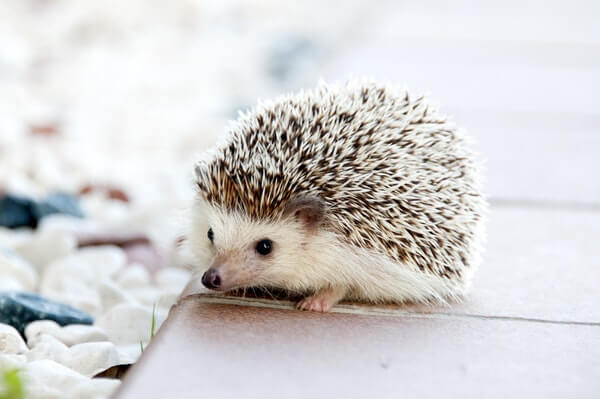 Hedgehogs eat a lot of things, but most don’t eat fruits or vegetables.

In the wild, they eat mostly insects, but also small mice, fish, worms, and even frogs. Pretty much any sort of high protein organism they can find.

Many reptiles not only subsist on small animals, but they prefer to eat live animals, which just adds another level of grossness to it.

I think it’s safe to say that they are the worst pets for vegans.

How Do Vegans Feel About Carnivorous Animals?

Some animals are obligate carnivores, meaning they must eat other animals to survive.

As a vegan with 2 cats, this is a subject I’ve thought a lot about.

I don’t claim to have all the answers, but perhaps I can shed some light on this topic.

No Carnivores Have Moral Agency 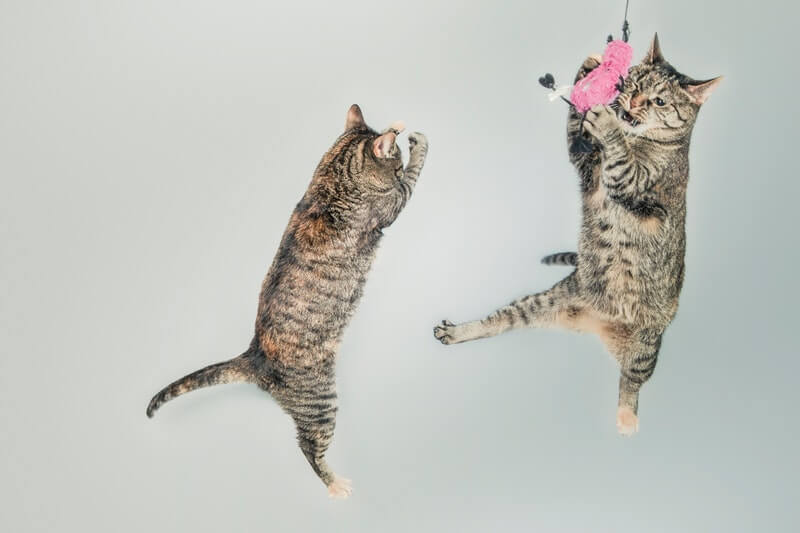 As far as i know, no obligate carnivore is quite intelligent enough to have moral agency.

This is one of the most important differences between humans and other animals. We can empathize with others, understand how our actions affect others, and make a judgement on what we feel is morally correct.

Even though cats and other carnivores have intelligence, they do not have this capability.

A cat has no notion of right or wrong. It sees a mouse or bunny and it tries to attack them on instinct alone.

They can’t empathize and understand the pain they will cause in others.

While it’s not a settled topic, many philosophers argue that you need to understand why something is bad in order to be a bad person. If a child steals a cookie, you do not say they are a “bad” person, they just lack the understanding of why their behavior was wrong.

In the same vein, it seems unfair to say carnivores are inherently bad, because they lack the understanding of the consequences of their actions. They’re not good or bad, a cat’s just a cat, a lion is just a lion.

Should We Accept Nature?

My cute, innocent little fluff balls want to kill mice, and that’s rather conflicting as a vegan.

What I’ve found myself coming back to over and over again is one thing: nature is cruel.

These animals didn’t ask to be obligate carnivores, but killing other animals is critical to their survival.

At this point, there are basically 2 types of vegans (I’m just making these names up by the way):

I fall into the second group. I understand that nature is cruel, and I accept it. I accept that it had to be that way for life to evolve. But I also think if we have the ability to reduce suffering, we should.

I think many would agree with that viewpoint.

Where it gets even more complicated is how would we do that?

Should we force vegan diets on them? No, that would be a form of cruelty in itself.

Should we kill all obligate carnivores (cats, snakes, sharks, etc.)? No, that doesn’t seem very vegan like.

Should we neuter all (or as many as we can) carnivores and reduce their population over time? Maybe, but that seems difficult since most are wild besides house cats.

Should we put them all in controlled environments to control what they can do? (Given our track record with zoos, I don’t think many vegans would think this is a good idea).

This is where I’ll refer back to the beginning – I don’t have all the answers. None of those seem like particularly good options for a vegan to support.

In Summary: How Do Vegans Feel About Carnivores?

Vegans may not like the actions of obligate carnivores, but it’s also hard to blame them. There’s no malicious intent behind killing other animals, just a need and instinct.

If anything, you’ll find that most vegans don’t like nature itself.

Perhaps we can change it, but doing it effectively isn’t easy either.

For now at least, I think most vegans should focus on getting humans to reduce the suffering they cause, and then maybe we can shift our focus to obligate carnivores.