While the cause of constipation is not always clear, I’ll go over the reasoning behind why you probably don’t have to worry about potatoes.

However, there are some cases where potatoes might seem to make constipation worse in the short term, and we’ll go over those as well.

Diet is only one factor that can cause constipation.

Of the most common constipation causes seen below, diet affects 2 of them:

There are some serious conditions on that list, so if you or someone you know has chronic constipation, they should see a doctor.

For now, let’s focus on hydration and fiber levels to see why potatoes may be effective for constipation.

Are Potatoes Good or Bad for Constipation? 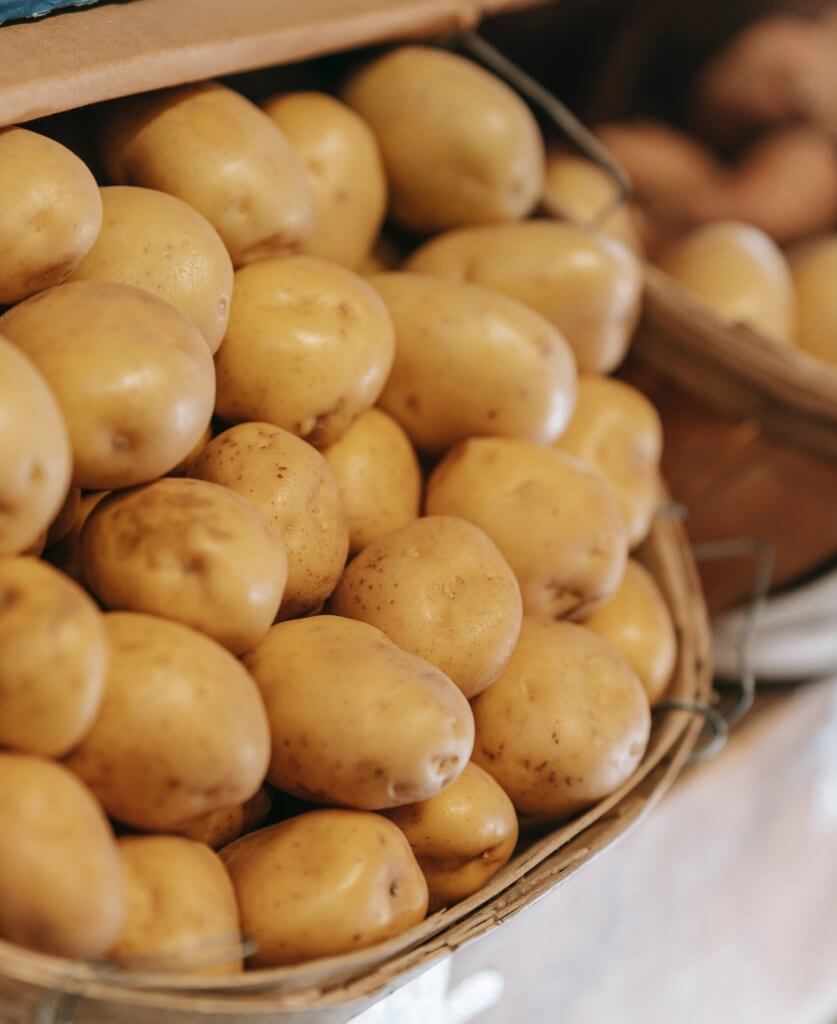 There are a few reasons why potatoes should be good for constipation in theory:

The table below shows the amount of water and fiber in 100 grams of a cooked white or sweet potato.

For reference, the minimum RDA for fiber is 25 grams for adult women, and 38 grams for men. So a single potato can be up to 40% of the RDA of fiber for some people.

In addition, both types of potatoes are about 75% water by weight. Even though it’s usually better to get water by drinking it, getting extra from foods is good as well.

Finally, while there are some better sources of fiber, potatoes do rank fairly high compared to most other fiber sources.

With a good amount of fiber and water, potatoes contain the 2 most important things to start to relieve constipation if dietary issues are the root cause.

Potatoes Could Make Constipation Worse Before It Gets Better

When things get clogged up, you need momentum and pressure to break through and provide relief.

At first, using a plunger on a toilet can push together loose debris and make the blockage even worse, but continued use eventually breaks any large clogs up.

A similar thing can happen in the case of constipation. The fiber in potatoes can absorb water and improve the motility of your gut, but that can bring together other loose material to make constipation worse at first.

In most cases however, the potatoes will continue to have a positive effect on movement in your gut and the constipation can be relieved. But there are exceptions to this in bad cases of constipation that may require professional help.

Research on Potatoes and Constipation Relief

There’s actually been a few studies on potatoes and constipation that we can look at.

The first study was done in 120 leukemia patients, who often suffer from constipation. They were given 200 grams of sweet potato per day. Symptoms began to improve within 24 hours, and kept improving during the week-long trial:

On the fifth day, except for “the sensation of anorectal obstruction” and “requirement of manual assistance” in Rome III criteria, other items regarding defecation were significantly improved.

While potatoes aren’t a miracle cure for constipation, there is evidence that they can provide some relief if eaten on a regular basis. More research is needed to identify optimal situations, dosage, timing, and other variables.

Could a Potato Allergy Cause Constipation?

Potato allergies are rare, but even if someone has a potato allergy, it is unlikely to cause constipation.

Instead, there are several more common symptoms associated with potato allergies like:

Could Eating an Expired Potato Cause Constipation?

Eating a bad potato has the risk of causing food poisoning, similar to most other foods.

However, food poisoning rarely causes constipation as a symptom. The more likely symptoms are:

Summary: Do Potatoes Cause Constipation?

While eating potatoes may make constipation worse in the short term, they generally have a positive effect on constipation.

This is due to being relatively high in fiber and water.

If you suspect you’re having constipation from something in your diet, it’s likely due to: