Growing up like most kids, I thought that vegans were frail and physically weak people that couldn’t even play sports because they couldn’t get enough protein from their diet.

I continued believing things along those lines for a long time before I re-examined them.

Years later after becoming vegan, it seems ridiculous that I ever believed some of these myths, and yet I see them persist in others.

So let’s debunk the most common myths about getting protein on a vegan diet.

Myth #1 – Plant Protein is Much Lower Quality Than Animal Protein

Protein quality is a term that still isn’t well understood.

Currently, the most accepted way to measure protein quality is with the Protein digestibility-corrected amino acid score (PDCAAS).

Here’s a reproduced table of a few common protein sources and their PDCAAS.

As you can see, plant protein sources usually score around 0.73-0.8 in whole form, while meat sources score 0.9+. Note there are not PDCAAS values for that many foods. In particular, I haven’t found scores for most vegan complete proteins.

But it’s important to understand that protein quality scores like the PDCAAS look at the amino acids absorbed from a single source. No one eats plain chickpeas by themselves, you eat other foods along with them.

If you look at protein sources in isolation, then plant sources appear to be lower quality.

In reality, if you have a variety of essential amino acid sources throughout the day, the individual protein quality doesn’t matter.

Protein quality scores look at foods in isolation, mainly looking at the amount of each essential amino acid absorbed. This is a simplistic and inaccurate way of looking at protein absorption.

This is sort of 2 myths in one.

First is that you don’t need as much protein as you probably think you do.Examine did a thorough study review and came up with the following guidelines for protein intake: 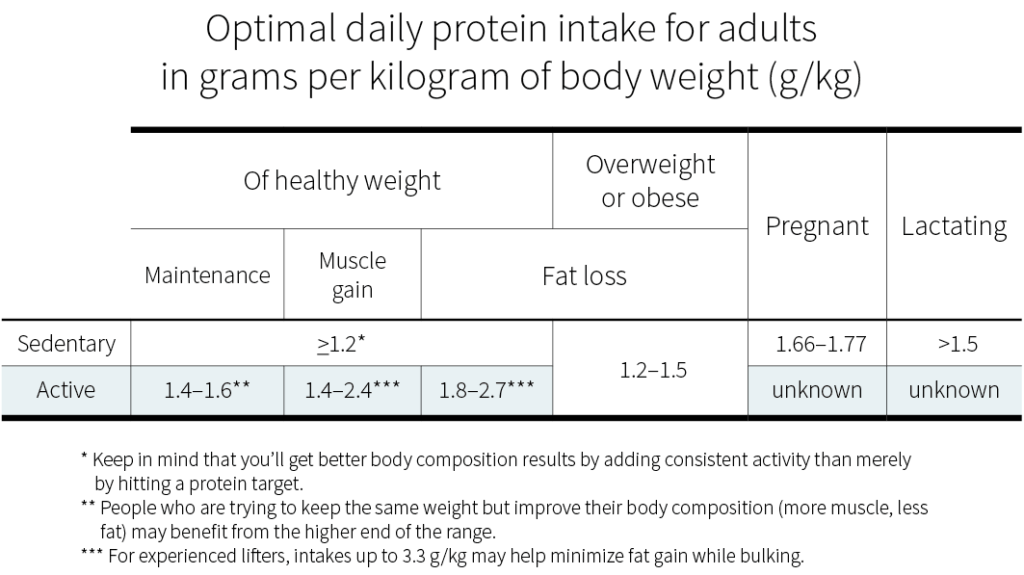 The second misconception here is that plants have no protein.

When you compare vegan protein vs meat, meat is the more convenient protein source, but it really doesn’t have that much more.

Foods like hemp seeds and peanuts are right up with meat sources of protein per 100 grams, as you can see in the plot below. 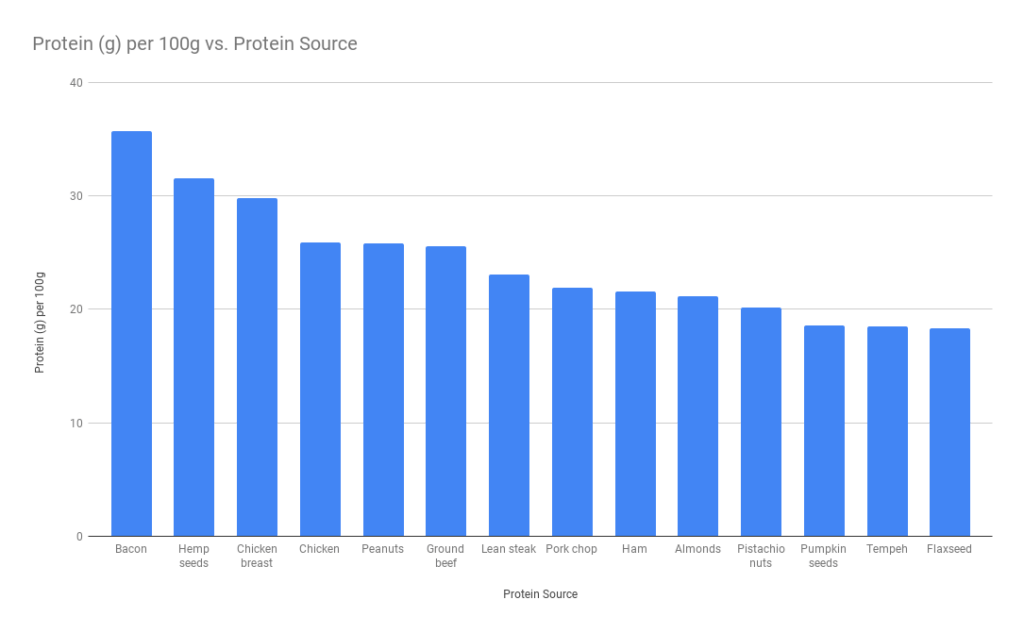 And even though the rest of the best plant sources of protein are lagging behind a bit, they still have a significant amount.

While it will take some planning, even an active vegan athlete can still get enough protein to gain muscle.

Myth #3 – A Vegan Diet Can Lead to Protein Deficiency

I’ve written a detailed summary on the likelihood of protein deficiency on a vegan diet, so I’ll keep this short here.

There have been multiple large-scale studies that show that while vegans typically eat less protein than meat eaters, it’s still way above the RDA for protein.

In order to develop a protein deficiency on a vegan diet, you would have to go out of your way and do something like eat 100% sugar.

Do note that this level of protein is just to avoid serious health effects. If you want to gain muscle, some planning is required as we saw before.

Any “normal” vegan diet will have more than enough protein to avoid a deficiency and its side effects.

Myth #4 – Athletic Performance Will Suffer as a Vegan

This was the biggest thing that prevented me from even thinking about going vegan earlier.

At the time, I was playing semi-professional soccer and taking it pretty seriously.

While it’s just an anecdote, I noticed no significant difference before and after going vegan in my performance, for better or worse.

There have also been dozens of NFL and NBA players who have gone vegan during their seasons and reported performance benefits. These are the biggest and arguably strongest athletes, so if they can make a vegan diet work, anyone can.

With some planning, a vegan diet will not hurt athletic performance, and it may even improve it for certain people.

You’re not going to be able to hit your protein targets while maintaining a 1,000-1,500 calorie deficit on a vegan diet.

However, a standard 500 calorie deficit isn’t that hard, especially if you make use of:

These are processed foods with excellent macros in terms of protein content, and really make hitting calorie and protein targets much easier.

You can also always add a bit more exercise to increase the calories you burn each day if you’re having trouble reaching a deficit.

Dieting and losing weight is more difficult on a vegan diet if you’re trying to limit muscle loss by keeping high protein levels, but it is possible. It’s quite easy if you’re willing to incorporate some processed foods.

Myth #6 – Infants Cannot Get Enough Protein on a Vegan Diet

I’m not going to pretend to be an expert on infant nutrition, but I can summarize some research on the topic.

The main concern about a vegan diet for infants and children is that it can stunt growth if there’s not enough calories, calcium, and vitamin D in it. Protein is a lesser concern as well.

However, even as far back as 2001, research showed that it’s feasible:

Therefore, with appropriate food choices, vegan diets can be adequate for children at all ages

But now, vegan foods are widely available, and fortified foods are even more common, which make getting nutrients for children on a vegan diet much easier.

Vegan formula (mostly soy-based, but there are some rice-based ones as well) also make getting proper nutrition for infants easier.

Bottom line: While a doctor or dietitian should be involved in the process, a properly planned vegan diet for a child will have more than enough protein and nutrition.