Selenium is an important mineral, but it’s not found in significant amounts in too many foods.

Brazil nuts are infamous for having a ton of selenium, but some other nuts have a good amount as well.

We’re going to be looking at the amount of selenium in a variety of nuts.

How Much Selenium Do You Need?

According to the NIH, an adult only needs 55 micrograms of selenium a day, which is a microscopic amount. 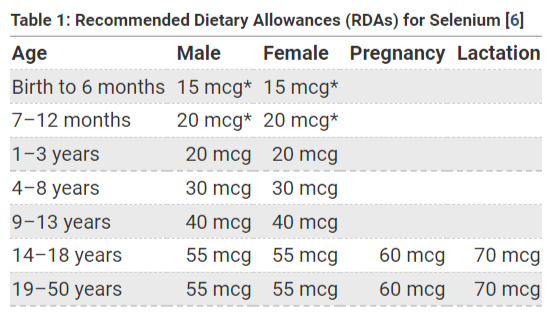 This amount varies based on age, but regardless you don’t need that much to be healthy.

Now that we have a bar for comparison, let’s look at the amount of selenium in a 100 gram serving of most nuts.

Note that the RDA column is calculated using 55 mcg as the target amount.

There’s a wide variety of amounts in different nuts, ranging from just 0.7 mcg to 1917.

Which Nuts Are Highest in Selenium?

Brazil nuts are the highest in selenium by far, they are an extremely unique nut with about 35 times the RDA in a 100 gram serving.

Cashews, peanuts, and pistachio nuts have a more reasonable amount of selenium that is still relatively high.

Is Too Much Selenium Dangerous?

I feel that it’s important to mention that too much selenium can be dangerous.

From the NIH, too much selenium on a regular basis can result in symptoms like:

More serious symptoms can follow if large doses of selenium continue to be consumed.

The tolerable upper limit of selenium is 400 mcg of adults, which is found in about 20 grams of brazil nuts (roughly 5 whole nuts).

Which Nuts Are Lowest in Selenium?

Pine nuts have very little selenium in them. Hazelnuts, macadamia nuts, pecans, and almonds are also relatively low in selenium.

You might get some of your RDA of selenium from them, but they shouldn’t make up a large portion of your intake in a healthy diet.

Are Nuts a Good Selenium Source Compared to Alternatives?

Brazil nuts are the best food source of selenium of any kind by far, some might argue that they have too much.

However, most other nuts have less than the other top sources, mainly including: