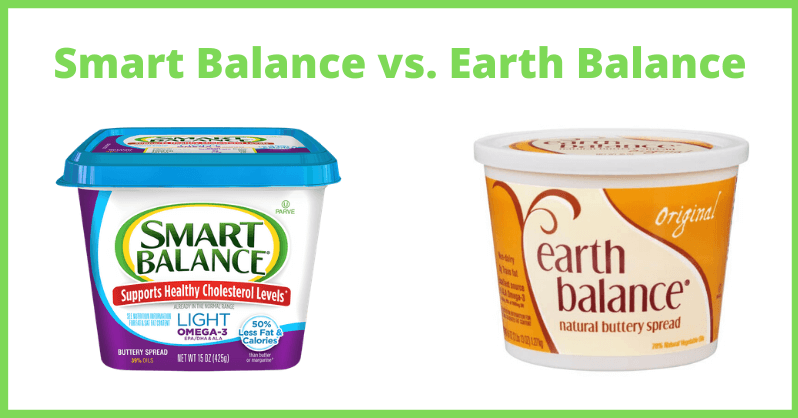 Smart Balance and Earth Balance are arguably the 2 most popular non-dairy “butter” spreads.

They’re sold in most stores, so it makes sense that people on a plant-based or vegan diet would be interested in them.

I’ve created a side-by-side comparison to show you the main differences between Smart Balance and Earth Balance.

They’re quite similar, but there are some small differences.

While both companies make a few different varieties of butter spreads, we’ll just look at the “original” flavors for both.

You can see that the core ingredients are almost identical.

Both have a vegetable oil blend that includes palm oil, which may be a problem for some vegans.

Palm oil is in every Earth Balance butter variety. Note that they use “sustainable” palm oil (it’s better, but still not great).

While palm oil isn’t in every Smart Balance variety, most Smart Balance butters are not vegan since they contain vitamin D (typically derived from lanolin).

Both Smart Balance and Earth Balance have very similar base ingredients. However, Smart Balance contains more additives (for texture and preservation), along with added vitamin D that may be a deal-breaker for vegans.

Again, we’ll just look at the main nutrition facts for both “original” versions.

Smart balance has fewer calories per tablespoon, which makes sense given there are more “filler” ingredients as we saw above.

Other than that, both have similar levels of every type of fat, there’s no big difference.

Finally, note that neither has any trans fats (super unhealthy), which used to be a problem with margarines.

Smart Balance is a bit lower in calories, saturated fat, and polyunsaturated fat than Earth Balance, which is typically desirable. However, it’s not going to make a big difference unless you’re consuming several servings.

Summary and Alternatives to Smart Balance or Earth Balance

For those on a plant-based diet, there’s not a big difference between the two products.

The core ingredients and overall nutrition are almost the same. Smart Balance has more filler ingredients if that’s something you care about.

Earth Balance is the best option for vegans of the two, since most Smart Balance products contain added vitamin D.

If you are vegan and also avoid palm oil, here’s my page of the best vegan butters without palm oil where you can find a suitable alternative.

Neither of these foods are particularly healthy, as they have virtually no vitamin or mineral content.

In addition, they are high in calories, and most people already get enough or too many calories as it is.

When comparing the two, Smart Balance is likely slightly healthier than Earth Balance since it’s a bit lower in calories. However, there isn’t a big difference and both should be eaten in moderation.