The amino acid profile of any protein source will vary based on the sample use.

The table below is pulled from this study where researchers looked at 44 strains of soybeans throughout Arkansas. It shows the range of each essential amino acid, alongside the amino acid profiles of egg and milk protein. 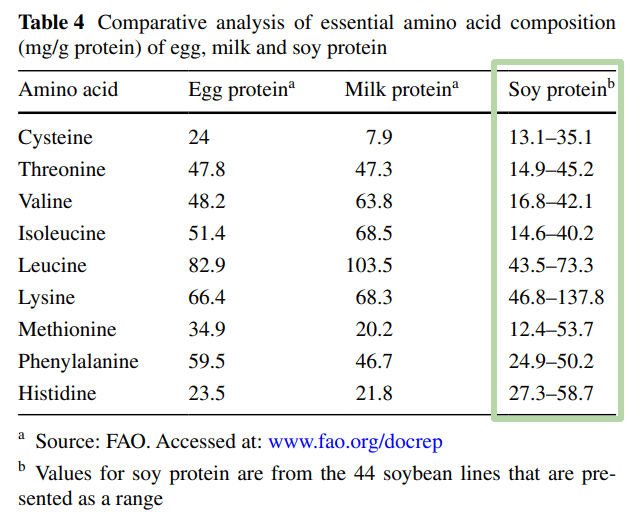 In some cases the ranges are quite large, showing that there can be significant variation between beans grown in different places.

Let’s look at how the essential amino acids in soy stack up against the ideal distribution of a complete protein (from Wikipedia). Since the units above are in mg/g of protein, we can just divide by 10 to convert it to a percent.

One thing you’ll notice right away is that the amount of each amino acid group varies significantly.

The study looked at 44 different soybean lines grown in the United States, and there can be significant variation.

On the high end, soy can be complete. But on the low end for most of the amino acid groups, soy is right on the edge or just below of the minimum level for a complete protein.

Is Soy a Complete Protein?

This is one of the reasons that it’s hard to say whether many foods have complete protein or not.

What I can say, is that most research papers that I’ve come across say that soy protein is still considered a complete protein since it has a sufficient amount of all essential amino acids. The sheer amount of protein in soy is typically considered more important.

Overall, while soy is a high quality and relatively balanced amino acid profile for a plant protein source, you wouldn’t want to rely solely on it.

Soybeans are one of the most nutritionally packed legumes there is. See my bean nutrition comparison for more detail.

What Proteins Pair Well With Soy?

While being a “complete” protein is generally considered a marker of protein quality, it’s not extremely important for the average person in a country with food security.

As long as you’re getting protein from other sources throughout the day, you shouldn’t need to worry about any imbalances.

However, if you want specific plant proteins to pair soy with, consider food sources that are relatively high in:

These are the groups that soy is sometimes lacking in certain strains. Seeds in general are great for those 3 main essential amino acid groups.

One final note I’ll make is that you’ll notice that soybeans are actually a great source of isoleucine. Even though the percentage of isoleucine in a gram of soy protein may be relatively low sometimes, there’s such a high amount of protein in soy to make up for it in lists like these.