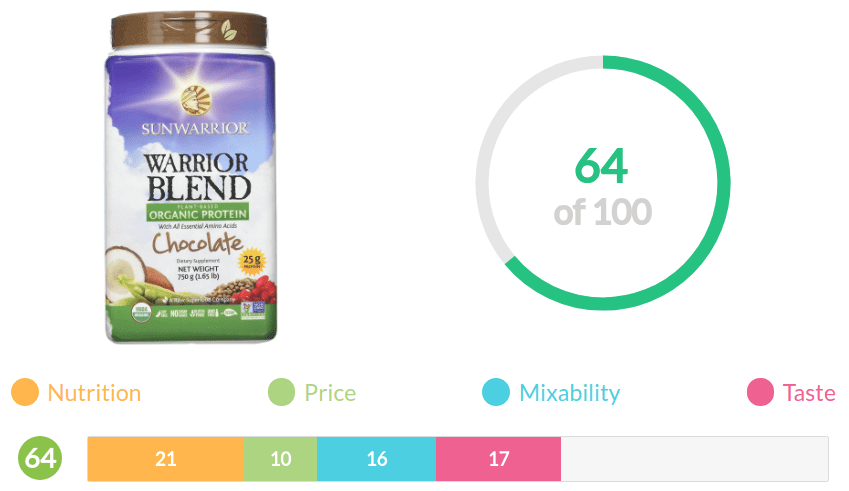 I have tested well over 30 vegan protein powders at this point.

I’ve broken the review into the 4 main parts of choosing a protein powder, each has a score out of 25. In most cases, the score is based on objective calculations to make it a fair comparison.

Sunwarrior sells a handful of different protein powders (Classic, Clean Greens & Protein, Classic Plus, and a few more), all with slightly different ingredients and use cases. This review page is just for the “organic warrior blend” product.

Overall, Sunwarrior has a good reputation as a company, founded all the way back in 2007 in the United States. It was created to give vegetarians and vegans an option for healthy supplements that used raw and “clean” ingredients.

I like to start with nutrition, because the whole point of a protein powder is to get protein.

Then, I plug this number into the following formula:

It’s a simple linear formula that is based on the best and worst protein ratios I found during initial research.

It a protein gets a 25, it has the highest protein content you’ll find in a vegan protein powder. If it gets 0, it’s not very protein-dense. 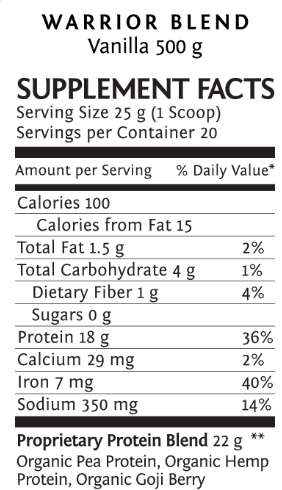 So 24 grams of protein equates to 96 calories from protein, or about 74% of the total calories.

This gives us a protein score of 21.15, which is significantly better than average across all other plant based protein powders that I’ve tested.

Is Sunwarrior Protein Powder Good For You?

One scoop of powder provides 32% of the recommended daily intake for iron, but there’s not a significant amount of other nutrients besides protein. This is an organic protein powder, with a minimal list of high quality ingredients:

It’s a soy free product that has a nice blend of plant based protein sources in addition to pea protein, giving the powder a well rounded profile of essential amino acids.

By most definitions, it has a complete amino acid profile.

Pricing of Sunwarrior Compared to Other Vegan Protein Powders

The price of a protein powder is often a deciding factor in which one to purchase.

That’s why I have a “price score” for each protein powder, in a way that you compare the unit cost of each product in a reasonably fair way.

In order to fairly compare all the protein powders I review, I look at the price per 100 grams of the product closest to 1 kg/2.2 lbs.

Again I’ve created a linear formula based on some research. A score of 25 means that the powder is as cheap as it gets, while a score of 0 means it’s very expensive.

In other words, this protein powder is more expensive than most. If price is a deal breaker for you, there are plenty of cheaper, quality vegan protein powders you can try instead.

Mixability of Sunwarrior: Does it Clump?

Clumps in your protein shake not only make it taste worse, but if it sticks to the side, that’s some extra protein that you’re just wasting.

To test mixability, I simulate the most common real-life way that a protein shake is made, and then filter out and weigh the chunks.

35 grams of protein powder was added to 450 mL of unsweetened almond milk from the fridge. Then I shook it for 45 seconds in a blender bottle, before pouring through a small strainer.

The strainer is weighed before and after to calculate the weight of the remnants (“clumps”).

The weight of the remnants is finally plugged into this simple formula:

In this case, there were 3 grams of remnants left.

Putting this into the formula gets a mixability score of 16.

That puts it right in the middle, meaning that it’s not great, but it’s not bad. Depending on how much clumps in your protein shakes bother you will determine how important this is for you.

The taste rating of a protein powder is the hardest thing to compare fairly.

Obviously I’m going to have my own preferences and there’s a very real chance that you may disagree.

Anyways, I assign a taste rating as close to this table as possible:

In this case, there was a bit of chalkiness.

The initial flavor isn’t great (like a dark chocolate aftertaste), but after you take a few sips it’s not too bad.

Overall, if you weigh all the categories evenly, Sunwarrior’s raw vegan protein powder is pretty middle of the road. Not great, but not bad.

I’d recommend it if price isn’t a big issue and you typically use a blender or really good shaker bottle.

Most importantly, it’s likely the best raw vegan protein powder, at least that I’ve tried so far. Since there aren’t too many high protein raw vegan foods, a good shake can really help up your protein intake.

I’m going to make a guess that there’s a good chance you’re interested in Sunwarrior because you like raw products, and you might also like organic products. Here’s a few alternatives to consider, starting with the raw ones first.

Some protein powders contain significant amounts of contaminants and toxins like mercury, heavy metals, lead, and BPA. While not confirmed by a third party, Sunwarrior has publicly stated that their protein powders are all “well below the safe guidelines found throughout the world”.

Does Sunwarrior Protein Have Heavy Metals?

Heavy metals are often found in vegan protein powders (and in whey). One of the reasons for this is that rice is grown in conditions where it can absorb heavy metals from the environment. Sunwarrior Raw Warrior Blend does not contain rice protein and should be very low in detectable heavy metals. Other Sunwarrior protein powders may have a low level of heavy metals like arsenic, but still a “safe” amount as explained before.