Some say that raw kale is best, while others say that cooking it is best.

Like most arguments on the Internet, claims are rarely  based on any credible scientific studies.

So let’s change that.

I found 2 highly relevant studies that cover the full picture of how cooking kale affects its nutritional content.

I’ll break down the main takeaways of them as simply as possible.

Study 1: Which Cooking Method is Best for Nutrients in Kale? 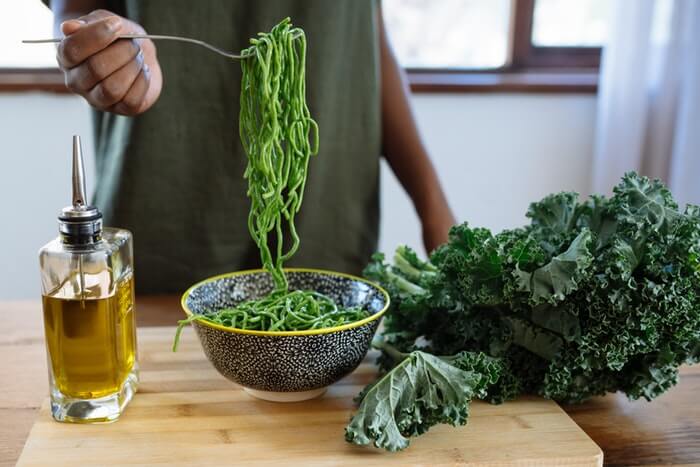 A 2015 study in the Journal of Food Chemistry looked at this question.

They looked at 3 different cooking methods:

During the experiment, they measured 3 types of nutrients:

In short, there all good things to get from food, and you can’t really get too much.

Here’s what the study found:

From that you can see that both steaming and stir-frying are both “good” ways to cook kale, and generally better than raw kale.

The researchers also summed up current literature that conclude:

Study 2: Is Cooked Kale Better for Cholesterol Than Raw Kale?

Kale has a an interesting ability to bind bile acid, like other plants (collard greens, broccoli, green bell pepper, etc.).

The reason that this is important, is that by bile acid binding is an effective way to force the body to use its cholesterol to synthesize active bile acid in its place. As a result, cholesterol goes down.

The health effects of cholesterol is pretty complicated, but in general, less is better, so this is a good thing.

It’s the same mechanism used by cholesterol-lowering drugs like Cholestyramine, but you can get it naturally through foods like kale.

This second study in question looked at the effects of cooking on bile acid binding.

What they found was that cooking (steam cooking) most vegetables improves their ability to bind acid. It was most effective in kale and mustard/collard greens, raising effectiveness by 13% in both cases.

Summary: The Best Way to Eat Kale for Nutrients is Steam Cooking It

Putting together the results of both studies and it’s clear that steam cooking kale is the best way to eat kale for nutrients (as long as you don’t cook for a really long time). We’re talking 30 minutes or more before it becomes less effective.

If that’s not an option, stir-frying is a fairly close second.