Whether you typically use sour cream when baking, or add it to soups and potatoes, you have a few options as a vegan.

Sour cream is made using cream (dairy) with lactic acid.

Since lactic acid can be obtained from non-animal sources, we can made plant-based sour creams that do a decent job replicating the traditional one.

These are getting easier and easier to find as veganism grows.

You’ll find these in a refrigerated section of most grocery and health food stores, usually close to the tofu. Sometimes they are mixed in with the dairy sour cream, so check there as well.

Tofutti is one of the most well known vegan companies. They make a variety of soy-based vegan alternatives, including sour cream.

You can try to find it online, but your best option is to use Tofutti’s store locator to find a local store to buy it at. 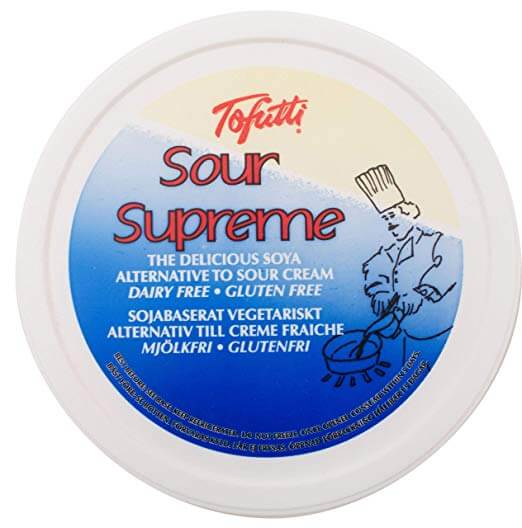 If you’re in a particularly progressive area, you might see other plant-based sour cream products as well.

It has a similar texture, and is still a bit sour. It won’t taste quite the same of course, but is a decent substitute.

The benefit of looking for a yogurt is that you have more options of what it’s made of. Vegan yogurt can be made from soy, almond, coconut, or cashew.

If you’re just baking with sour cream, coconut cream is a great option.

It has a similar texture, just without the sour part naturally.

You can either chill a can of coconut milk in the fridge overnight and scrape out the thick creamy part. Or, you can buy cans of coconut cream in many stores as well.

Then, add a tablespoon of lemon juice or vinegar per cup of cream that you use to mimic the sour taste of sour cream.

Side note: Coconut milk is also one of the best vegan substitutes for heavy cream.

My preferred option is to make my own sour cream.

It’s not hard, and you have full control of the ingredients. There are 2 main types of vegan sour cream recipes that you’ll find: cashew-based and tofu-based. 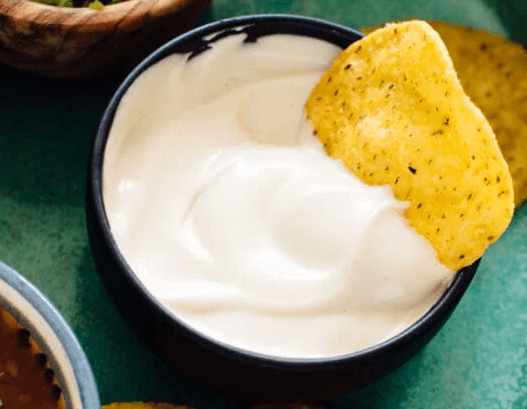 Cashew sour cream might be the closest we can get to the real thing. I’m not sure why many store-bought vegan sour creams aren’t based on cashews.

Silken tofu can also be blended up to make a thick creamy substance that does a good job at replicating cream. Plus you get extra protein.

Start with a package of silken tofu (it will say silken on the package), and blend it together with lemon juice, apple cider vinegar, and any seasoning you’d like (e.g. parsley, garlic, salt, etc.).

Add the sour ingredients slowly and taste as you go (with the blender fully off of course!) while you find the taste that you’re going for.