It’s not something I particularly like to share, but I’ve had dandruff issues for the last few years.

After testing different pomades and hair care routines, I eventually started looking for an anti-dandruff shampoo.

Unfortunately, most well-known ones are not vegan, either because they are tested on animals, or contain animal products like keratin.

However, there are a decent amount of vegan and cruelty-free anti-dandruff shampoos if you do a little research, so I found the 5 most recommended and highly rated, and bought them all to test them. 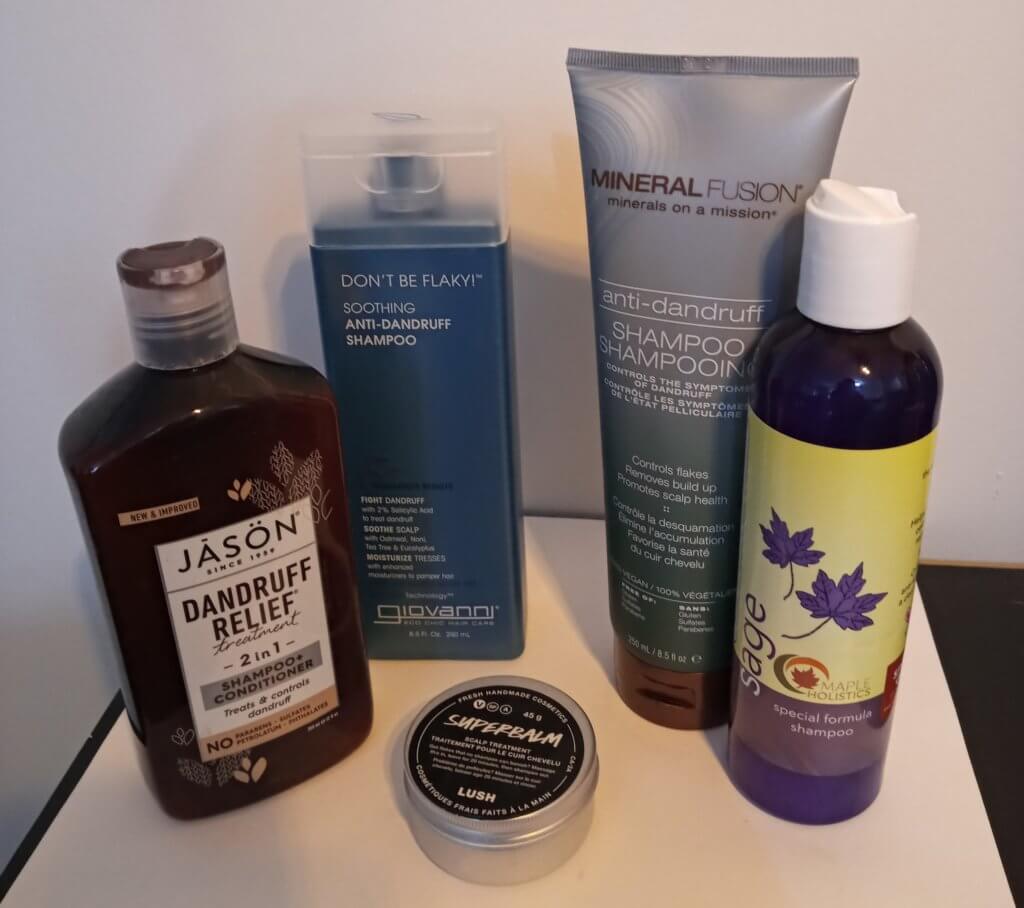 I rotated through each of them every few weeks over the course of a year and visually checked dandruff levels by brushing my hair over a black table.

If you live in a place with hard water, skip to the last section at the end of this post.

In this review, I’ll walk you through my results and recommendations.

Tips to Get the Best Results

Keep in mind however that dandruff seems to respond differently for different people, so what works for me may not work for you and vice versa.

From my testing I’ve learned that you should:

It also may be worth picking up a vegan alternative to boar bristle brushes. They can help distribute scalp oil, which can help reduce dandruff.

I’ll start off by saying that all of these had at least some effect on my dandruff, but none of them got rid of it completely.

There was still a smaller, but substantial amount left after using each of them.

UPDATE #1: My results have continued to improve over time. After about 8 weeks of rotating through them (using shampoo 2-3 times per week), dandruff is now minimal and hard to see in most lighting conditions. So even if you don’t get results right away, stick with it, as it may just take some time to work.

With that said, let’s look at a summary of the results, there are more detailed reviews lower down on the page: 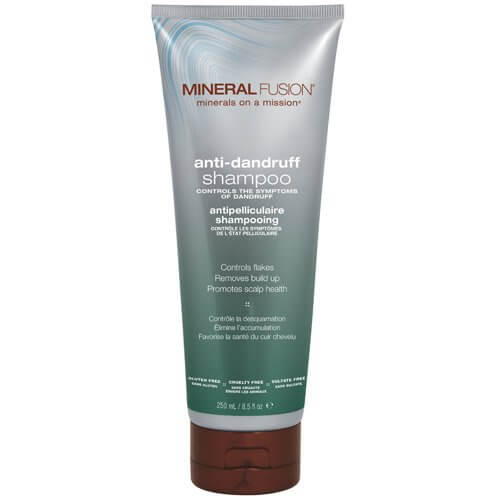 For me, I noticed the biggest improvements in the days after using Mineral Fusion’s anti-dandruff shampoo.

It incorporates salicylic acid, which is what many dandruff studies have tested.

The shampoo is clearly labeled cruelty-free, and in the questions on its Amazon page, a company rep confirmed that it’s “100% Vegan.”

What I noticed about the shampoo: 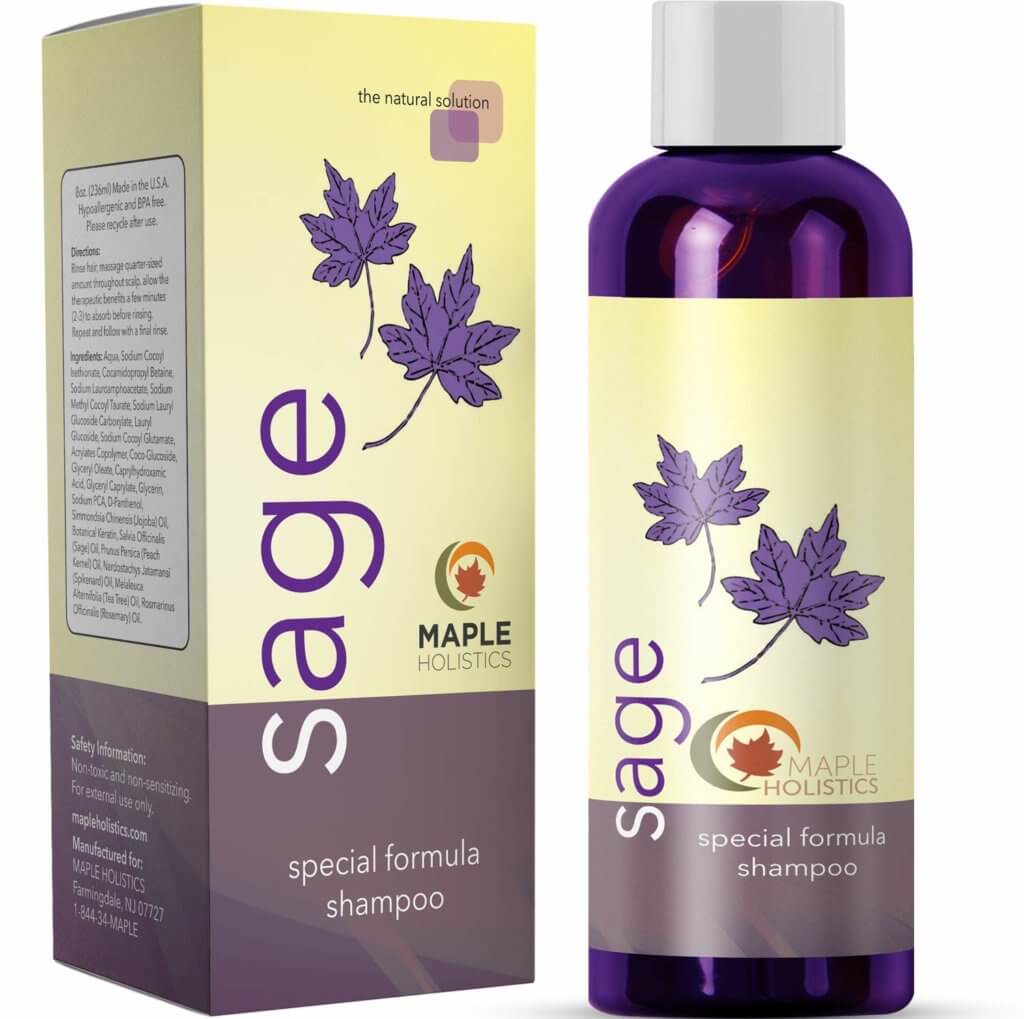 While this product doesn’t explicitly say it’s vegan (only cruelty-free), many reviewers on Amazon said it was, and the ingredients look good to me as well.

It’s a thin liquid shampoo that you’re supposed to use and rinse out, and then repeat again during the same shower (all the others only recommended one application).

The smell reminds me of a plant of some kind (something like mint and cilantro); it’s not great, but not bad.

Initially, I didn’t have this one ranked very high, but after sticking with it for a few weeks, my dandruff reduced to minimal amounts. Obviously you might not see the same results, but I do think it was good enough to be worth a try. 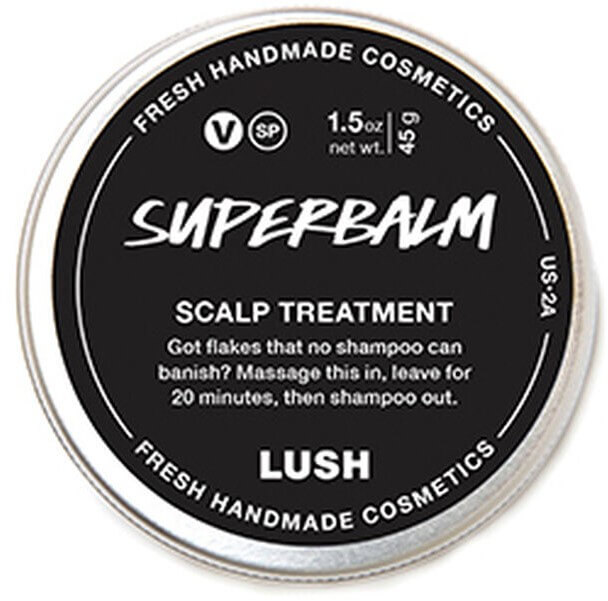 Okay, this is technically not a shampoo…

It’s a treatment product that Lush sells that you need to massage into your scalp and let sit for 20 minutes, and then wash out with shampoo. So you can actually combine it with another shampoo on this list (I didn’t do this for the sake of the experiment, but will in the future).

I only included this because it’s something I picked up on a whim at Lush one time and it’s quite effective.

However, it’s also pretty expensive, each tin lasts me about 10 uses (and I have quite short hair). Note that you’re not supposed to rub it in your hair, but the scalp itself, but I imagine it’s more difficult with long hair and there will be some “waste.”

It’s also pretty inconvenient since you have to leave it in your hair for 20 minutes. 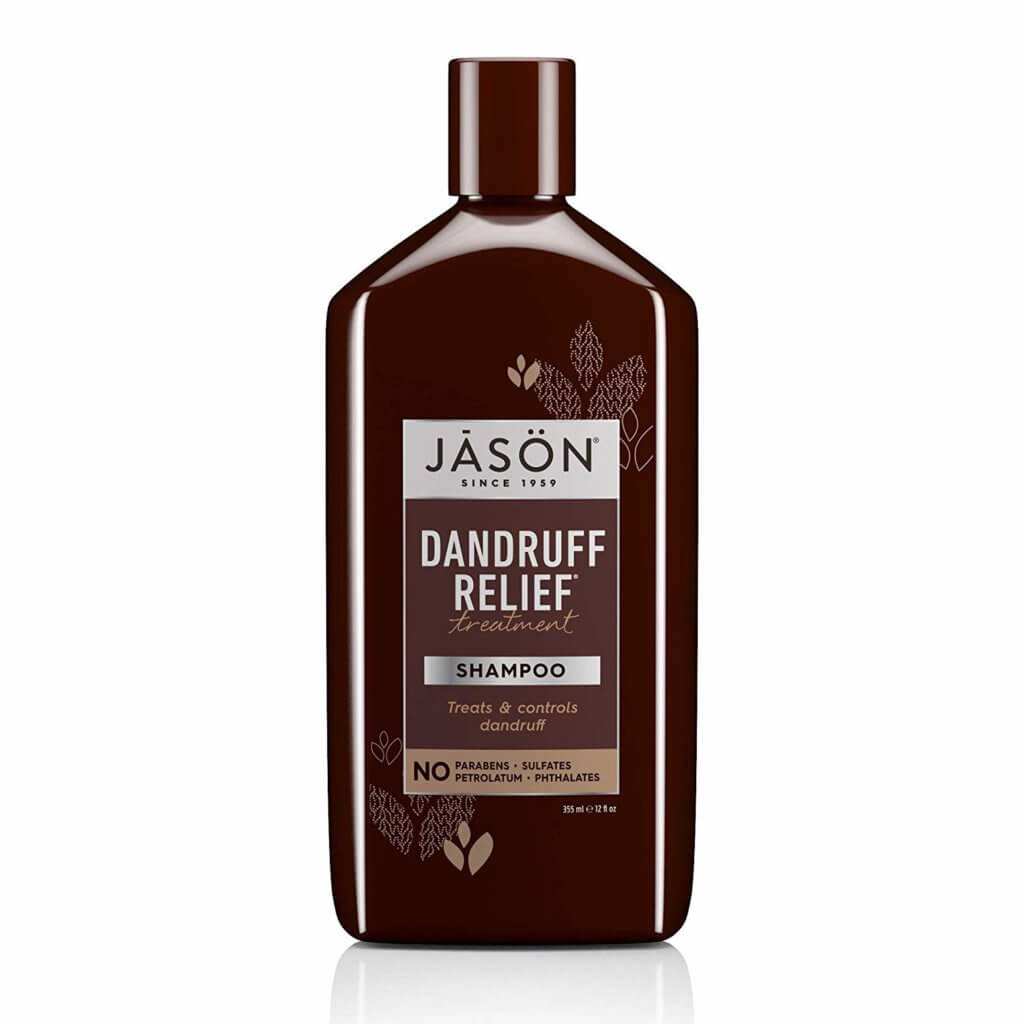 Now we move into the shampoos that I still saw significant improvements after using, but not quite as much.

The seller of this on Amazon clearly states:

… this product is both vegan and free from any sort of animal testing. Hope that this helps!

It incorporates a variety of plant oils, which tend to help with itchy scalps according to other reviews I’ve seen.

My dandruff has never caused itchiness, so perhaps if it did this one might have been rated higher.

This shampoo is labeled vegan and cruelty-free.

For whatever reason, I just didn’t see too much of an improvement after using it, despite it containing 2% salicylic acid, just like my favorite one (Mineral Fusion).

It has a whole bunch of other natural ingredients like oatmeal, noni, tea tree, and eucalyptus.

To be fair, it left my hair pretty smooth after, and has a minor, but pleasant smell (I think I’d describe it as “fruity”).

And while it came last place on this list, that’s just saying that it’s the worst of the best vegan anti-dandruff shampoo, not that it’s not a decent product.

One final note is that if you’re not shampooing often, it’s not a bad idea to find a vegan boar bristle brush alternative to help spread your scalp oil out evenly. Poor distribution can be one of the factors that leads to dandruff.

Hard Water Can Cause Dandruff

My dandruff coincidentally started when I moved to a new city that has hard water.

It wasn’t until I learned that hard water can cause dandruff that I put two and two together. Even with a softener, bowls and certain appliances still get some build-up over time. And it seems to be about the same for hair.

So even though those shampoos above helped, I was able to get rid of 95%+ of my dandruff once I realized my dandruff was caused by the minerals in my water.

How do you fix this?

Just like dishes or appliances that have buildup as a result of hard water, you need to break down those “clumps” of minerals that have built up. For dishes, I use a vinegar soak. When it comes to hair, you have 2 main options:

Using Apple-Cider Vinegar as a Test

I started with using apple-cider vinegar in order to see if hard water was actually causing my hair issues.

Here’s what I did:

The problem is that a mixture like this is pure liquid, so it’s hard to apply and get it to stay in your hair. The smell also isn’t great.

Still, it reduced my dandruff by about 75%, so I knew I was onto something.

After some more research, I found out that clarifying shampoo is exactly what I needed.

It’s essentially extra strength shampoo that seems to be able to break down any hard water deposits. And since it foams up like a normal shampoo, it’s easier to rub in your hair and leave to soak.

There aren’t too many vegan options, but that one I use is ACURE Curiously Clarifying Shampoo. 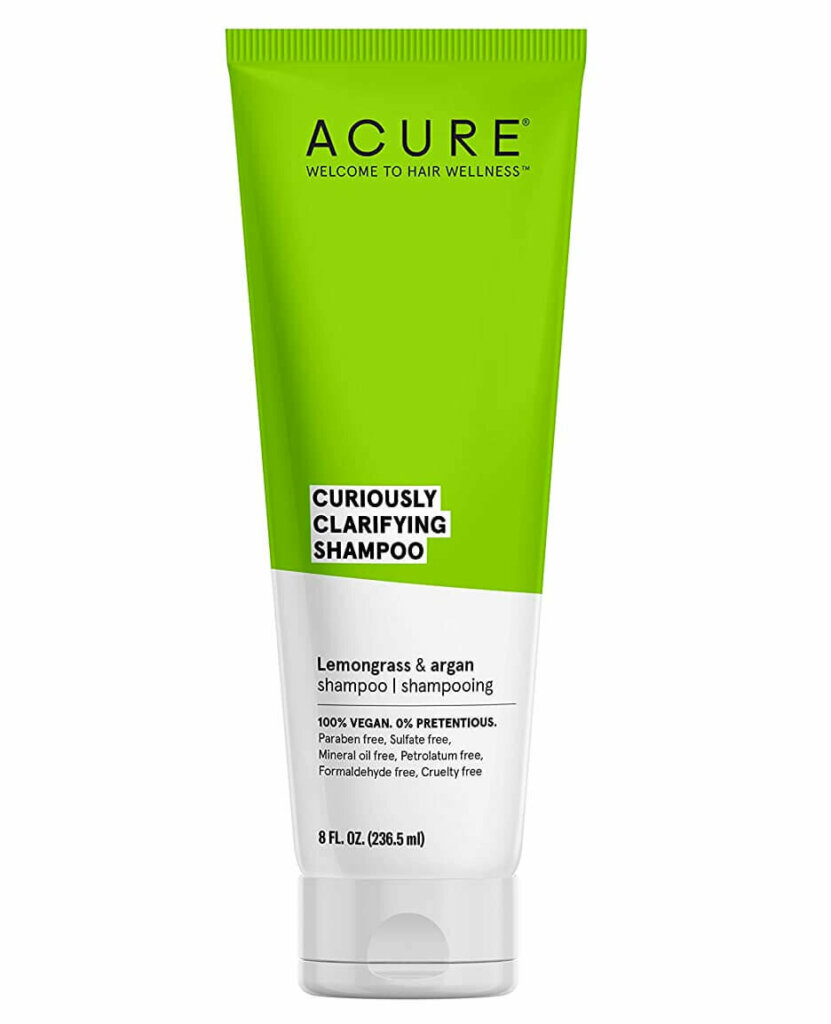 Again, it’s very important that you give it at least 5 minutes to work once you put it in your hair.

It’s also crucial that you rub it into your actual scalp, and also that you rub your scalp afterwards to break up any build-up and rinse it off your head.