I support vegan businesses any way I can.

One of the ways you might want to do that is by finding vegan companies to invest in, and add them to your portfolio.

While you don’t have a ton of options when it comes to vegan companies that are publicly traded, I’ve put together a comprehensive list of your options.

You basically have 4 options to invest in vegan businesses, based on your budget, and level of risk/reward that you’re after.

It’s tricky to invest in private companies (not listed on the stock market).

Startups and small businesses need money to launch or grow, but can’t go public. So they either turn to angel investors and venture capitalists (which are typically millionaires), or to crowdfunding platforms.

Investing in these companies is an option, but most investors don’t know about it.

On crowdfunding platforms like Wefunder (which is awesome), you can invest in any (reasonable) size and buy equity of vegan companies you like (note that not all companies there are vegan). This method is time consuming, and there are limited opportunities to invest, but there are some.

A few people have launched startups to connect vegan businesses that need investments to vegan investors (that don’t need to have a ton of money to invest) in the hope of finding the next Beyond Meat before it gets big.

One option I’ll be keeping a close eye on is lab grown meat companies (a bit controversial on if lab grown meat is vegan or not right now though). If I spot any interesting opportunities, I’ll add them to this page.

This is probably my preferred option for investing, but there’s also a limited amount of companies that fall into this category.

The companies below aren’t necessarily outspokenly vegan, but they only sell vegan products as far as I can tell, and are listed on a public stock market.

One market I’m keeping a close eye on is pea protein. Right now, there are no pea protein companies on public stock markets (unfortunately, Beyond Meat’s pea protein supplier – Roquette – is family owned), but that will likely change in the future.

These are in no particular order. 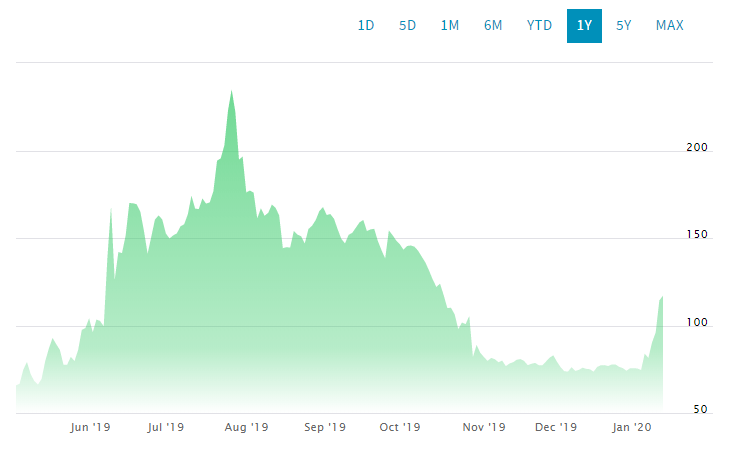 Beyond Meat is the first big vegan meat company that has gone public.

It offered its IPO at the beginning of May 2019, and got off to a strong start before hitting a rough patch.

It’s hard to know whether or not this meatless meat company is a good investment. On one hand, it looks like Beyond Meat is only going to continue to grow at a rapid pace. But on the other hand, many experts have been quick to point out that the share price is quite high for its current earnings. 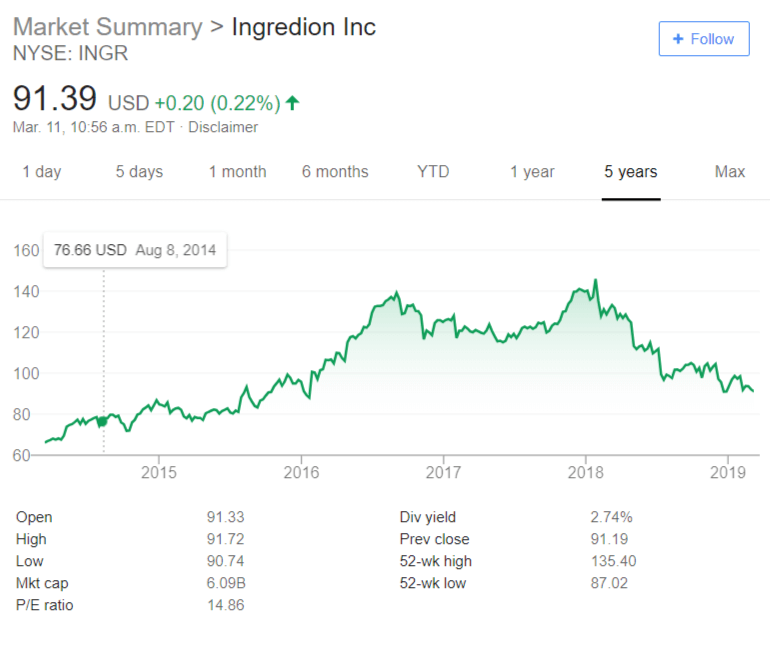 Ingredion doesn’t make food products directly, but they are a massive company that supplies certain ingredients to food manufacturers.

This includes, oils, sweeteners, starches, and grains, among other things.

Most importantly, all their products are plant-based. It’s tough to find specifics, but I believe they don’t use any animal products either.

The company was also named as one of the 2019 World’s Most Ethical Companies by Ethisphere (and for the 6 years before as well). 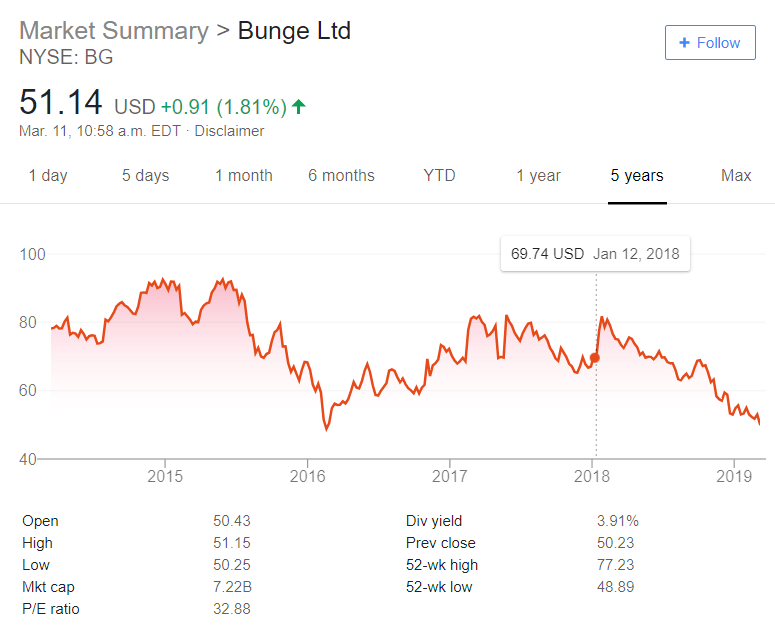 Bunge owns several brands which sell oilseeds, grains, and sugarcane across the globe. They all appear to be vegan-friendly as far as I can tell.

They seem pretty transparent and focused on the environment and sustainable practices. 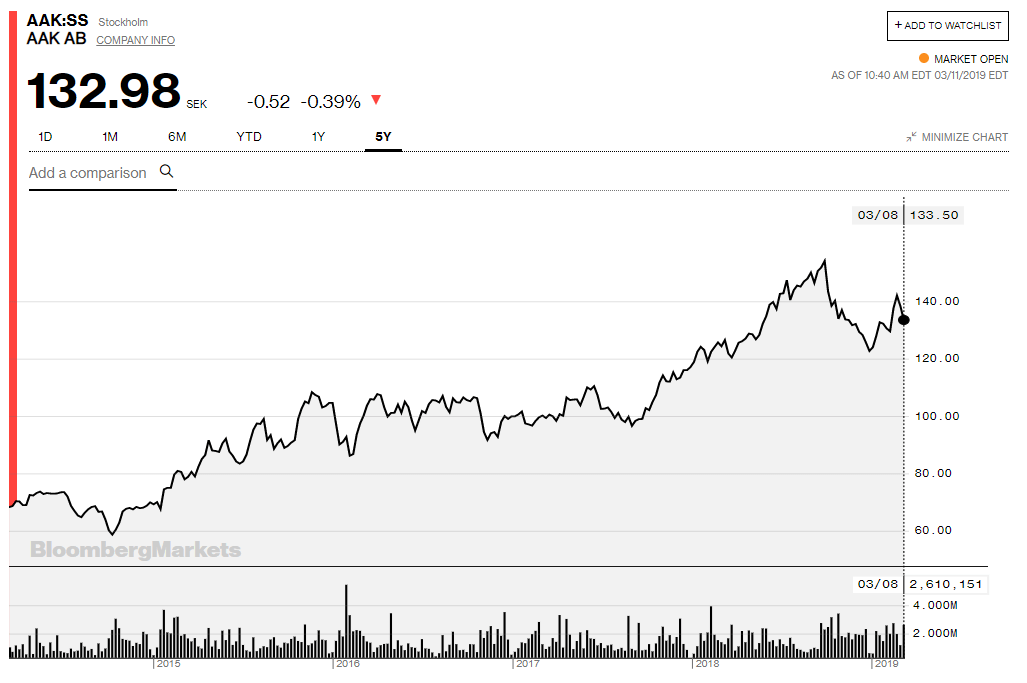 It’s a bit hard to tell from their website, which is loaded with nonsense buzzwords, but AAK sells oils and fats.

Their products do appear to be vegan, but I’m not super confident about that. They likely are, but I’m not 100% sure.

They do focus on sustainable and responsible sourcing, which are very much in line with vegan principles.

Note that AAK is on the STO. If you live in North America or somewhere beyond Europe, you can still invest in it if you want, but only certain investing platforms will let you. A quick call to whatever bank you use is the easiest way to find out.

This is the coolest company in terms of what they do in my opinion.

SenzaGen’s purpose is to make it possible to eliminate animal testing for allergenic tests. They make a big difference in the cosmetic, dyes, and pharmaceutical industries.

It’s another one listed on the STO, so you might need to contact your investing bank and find out if you’re able to buy stock. 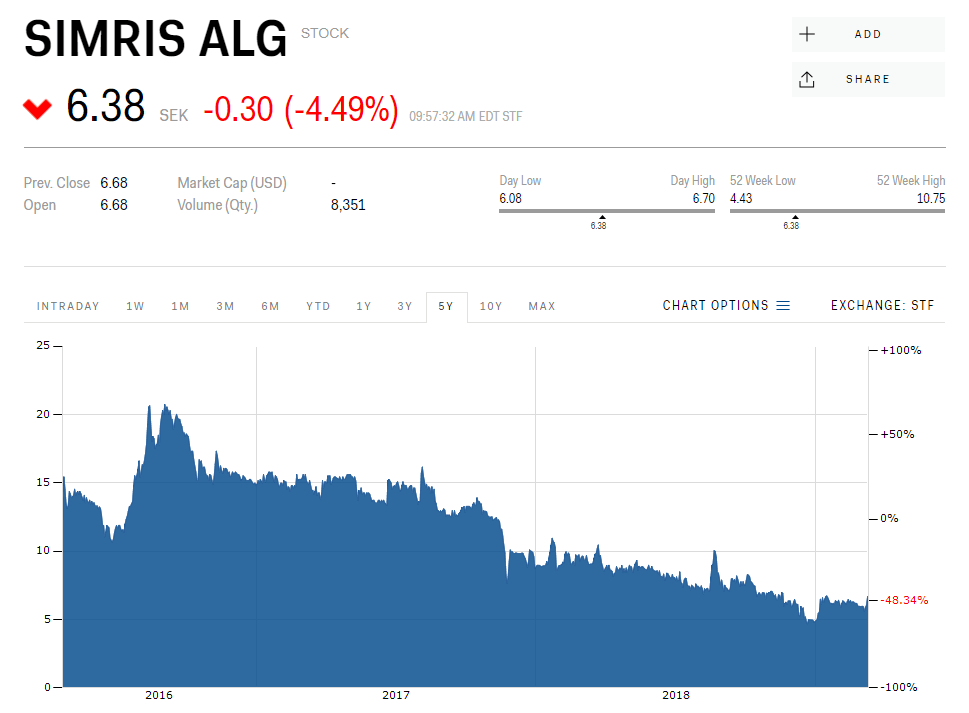 Again, Europe is leading the way in plant-based foods.

Simris makes vegan omega 3 supplement from algae, which is the best plant source of omega 3s. They make a few other algae-based products.

Their packaging and branding is beautiful, so hopefully they will do well in the future. 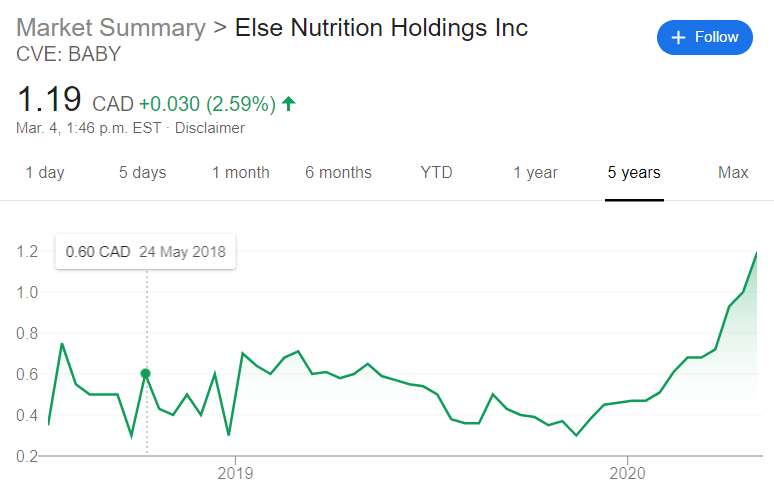 While their products aren’t clearly labelled as vegan, there are some mentions of their products all being “vegan” on their website and a few news articles that I found.

There are no obvious animal products in the ingredients they use, but some like “l-carnitine” that could technically come from plant or animal sources. 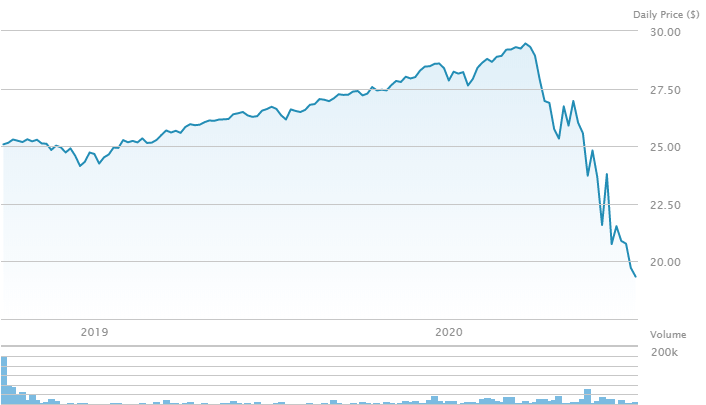 This is a relatively new ETF (here’s a brief intro to ETFs if you’re not familiar with them).

Their goal is to invest in companies not actively hurting animals or the environment:

Key note: While they do have shares in vegan companies like Beyond Meat, this ETF also has holdings like Facebook and Apple. I guess they’re technically “vegan” companies, but they sure aren’t what you think about first. Just be aware of this.

Total Produce is one of those companies that don’t have a vegan philosophy, but only sell vegan products.

They sell a variety of fruits and vegetables. 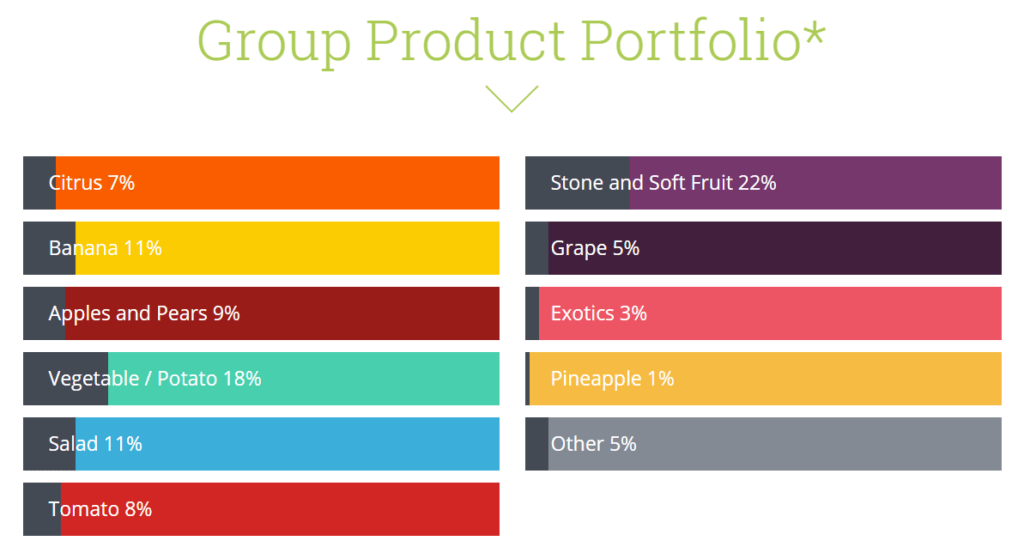 Again, there aren’t many vegan options in the stock market, but here they are.

If you’re new to investing, you’ll need to set up a trading account on a platform like Vanguard. 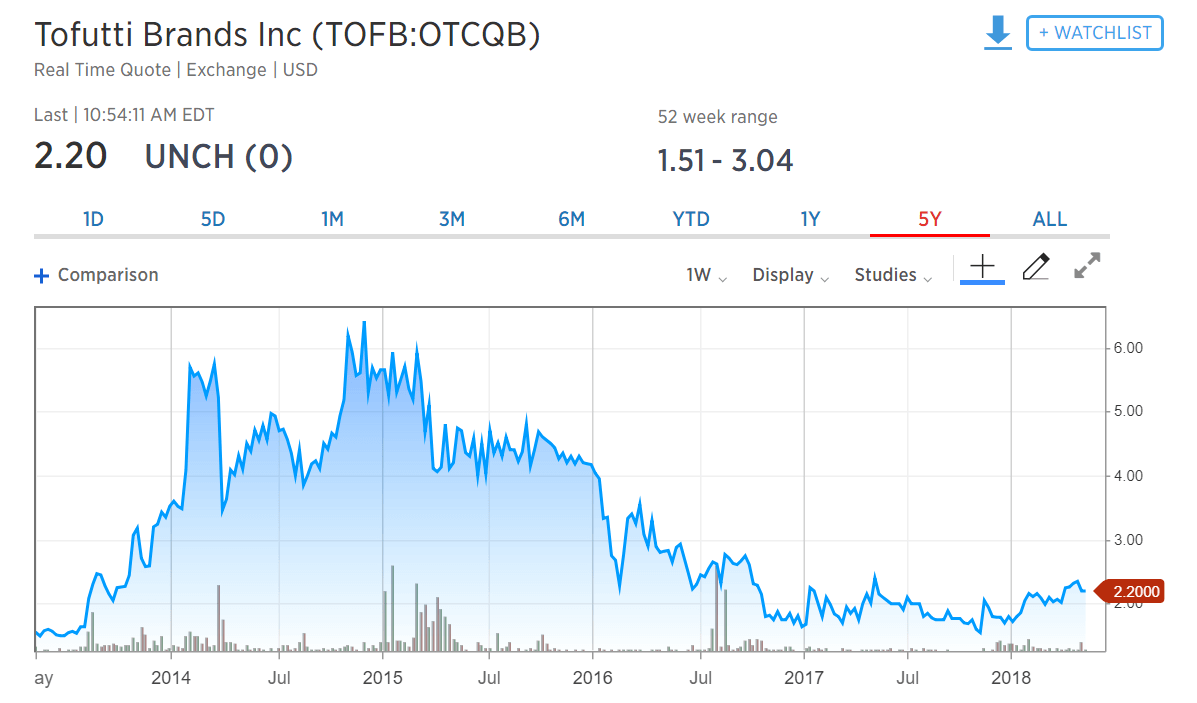 Note that while most of their products are vegan, not all of them are.

It’s an over the counter stock, so you can buy shares in it, but as you can see from the chart above, they haven’t done so great in recent years.

The Hain Celestial Group owns several “natural” and organic food companies. You might recognize a few:

HAIN owns several vegan companies, but also own companies who slaughter chickens and other animals. So you’re not strictly supporting vegan companies if you invest in HAIN, but I’ll leave the decision to you. 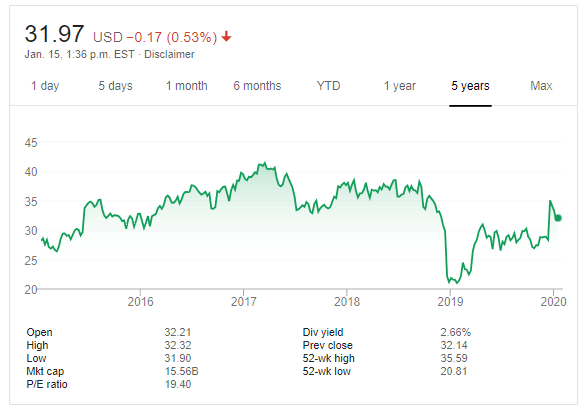 However, Gardein was purchased by Pinnacle foods, which was then acquired by Conagra, which owns a ton of food brands (some vegan, some not). 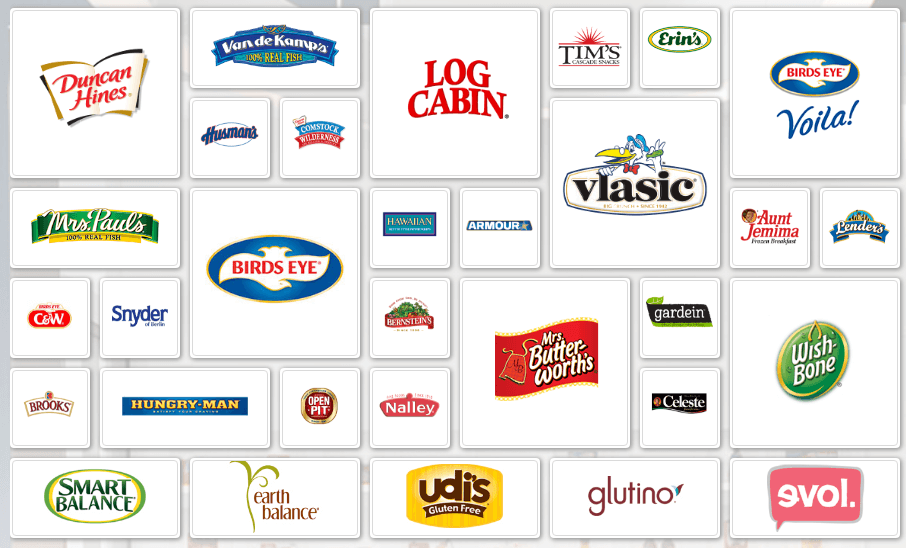 As you can see there are plenty of non-vegan brands that they own as well like Duncan Hines and Mrs. Pauls.

That’s really it for even vaguely vegan-related public companies right now. Unfortunately, investing and veganism are more or less mutually exclusive for now.

Option #4: Buy Stocks in Companies Who Are Starting to Support Veganism

If you’re okay with the idea of investing in Hain Celestial because a large portion of their business is vegan, you might be able to apply similar logic to other businesses.

Here are some companies on the public stock market who are ramping up their investment in vegan-friendly products:

None are vegan, lets be clear about that, but clearly see that the future is plant-based and will hopefully transition more and more of their business to vegan-friendly activity.

I’m far from an expert investor, but I’ve spent quite a few hours doing research for this post to make sure it covers all your options.

Personally, I feel that investing in smaller, private companies that truly embody vegan ethics is the way to go (for now at least). Maybe even go to local vegan businesses and ask about investment opportunities if you have the motivation.

Full disclosure: While I mentioned VeganLaunch originally without any sort of affiliate link because I think it’s a great service, at some point I’ve become an affiliate, meaning I do get a small commission if you end buying their services. I’ve tried to be as impartial as possible and laid out what they offer as clearly as possible so that you can form your own opinion.