Eczema is unfortunately very common and annoying. It affects 15-20% of children, and 2-5% of adults worldwide (1).

Some claim that a vegan diet is a great eczema treatment, almost miraculous, while others say that it makes their eczema worse.

To find out, I reviewed several peer-reviewed studies that looked at many potential dermatitis treatments, some of which included a vegan diet.

I’ll break them down as simply as possible, and then summarize everything up at the end.

How Diet Affects Eczema: The Basics

There are many types of eczema.

It’s important to recognize that we don’t fully understand the group of diseases that eczema covers that well still.

Some types of eczema are related to dietary intolerance, while some are not (most are from contact with allergens or irritants outside of diet).

The most common foods that trigger reactions are dairy and nuts.

So just from that, before looking at any studies, it’s possible that a vegan diet could help eczema, just by eliminating dairy. But if your issue was with nuts or a different food, it may not help if you’re still eating them.

Note that the majority of patients with eczema do not improve simply by changing their diet (2).

There are multiple types of eczema and only some are affected by diet. Depending on your specific type of eczema, a vegan diet could either improve or worsen your condition.

Not many eczema studies or journal articles have specifically looked at using vegetarian or vegan diets, but some have.

The most interesting study I found was one where 20 patients with atopic dermatitis (the type of eczema that causes red and itchy skin) were put on a vegetarian diet for 2 months (3).

The effect was measured using the SCORAD index. 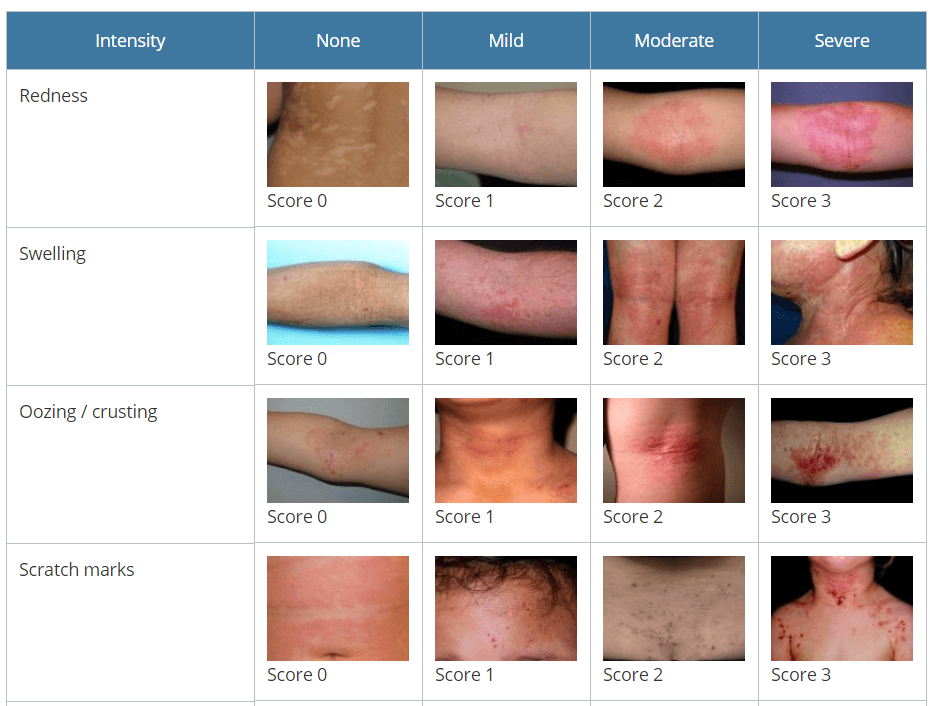 After 2 months, the average severity of the dermatitis symptoms were essentially cut in half.

That study alone isn’t conclusive by any means, but it shows that a vegetarian diet can help.

Also note that on top of the vegetarian diet, they were also on a calorically-restricted diet (e.g. eating fewer calories than they were burning). This could have had a significant effect as well.

Finally, in a meta-analysis of eczema research up to 2009, a study where cows milk formula was switched for amino acid formula for infants was examined (4). It showed weak evidence that it helped. Again, not conclusive, but there could be a correlation.

Based on current research, it does seem that a vegan diet can improve certain types of eczema like atopic dermatitis, mainly from removing dairy. However, a lot more research is needed to make any definitive claims.

Other Treatments for Dermatitis

I know we’re focusing on diet, but I wanted to quickly summarize the results of that review mentioned above.

They found that there was some evidence for the following treatments:

They also found that probiotics and essential fatty acids (oils) do not improve eczema (in children at least).

Finally, there isn’t enough high quality data to know whether vitamin supplementation of any kind is effective.

Again, we just don’t know that much about eczema, and it needs to be researched more in the future.

In rare cases? Yes, it could make your issues worse.

For example, you could be an eczema sufferer who reacts to nuts. When people switch to a vegan diet, they often eat more nuts, which may make your symptoms worse.

For most people with eczema, the issue isn’t related to diet, so going vegan probably won’t make a difference, good or bad (5).

Either way, there’s insufficient research for anyone to give a definite answer.

While the research isn’t clear yet, stay clear of nuts if your eczema symptoms are worsening on a vegan diet.

As we’ve gone over, the research suggests that most types of eczema don’t flare up because of food allergies.

But some do, usually from dairy or nut intolerance.

If this is the case for you, switching to a vegan diet may reduce or eliminate symptoms. It could also make them worse if you start eating more of a trigger food, like nuts.

The best thing to do is to keep a food and activity journal and try to notice patterns related to your flare ups.

Or, try a vegan diet for a few months and see if it helps or hurts.

It’s not a miracle eczema treatment for everyone, but it has been shown to make a big difference in specific cases.