We know that triglycerides play a role in heart health.

There’s a ton of research about this, and just intuitively it makes sense that having components of excess fat floating around your bloodstream is probably a bad thing.

Some doctors recommend plant-based diets to patients with high triglycerides. I’ve gone ahead and summarized relevant studies for you so that you can see why a vegan diet may or may not help you.

Observational studies look at subjects as they currently are, without having them modify behavior.

A 2007 study looked at the cholesterol and triglyceride markers for 76 individuals that fell into 4 main diet groups (3):

Here’s a summary of the main results we’re interested in:

There’s quite a large standard deviation, but with a significant p-value, we can be pretty confident that in general, vegans have significantly lower levels of triglycerides.

Also note that similar reductions were seen in both vegetarian groups.

Finally, note that this effect was still preserved even after the authors controlled for age, gender, and smoking habits.

In general, the vegetarians and vegans you see walking around in daily life have lower triglycerides than omnivores.

How Does Switching to A Vegan Diet Affect Triglycerides?

There are limitations to observational studies like the one we looked at above. Perhaps those vegetarians were just healthier to begin with, or there’s a factor like exercise that wasn’t controlled for properly.

That’s where randomized control studies come in. You keep one group on a “normal” diet, and switch the other one to a vegan diet to see the effect.

I found a solid meta-study that narrowed down over 7,000 studies to 27 (a mix of observational and random control) that looked at cholesterol, triglycerides, and diet (4).

Here’s a quick look at the effect of a plant-based diet in some of the randomized trials (note that the bars are relative change from the omnivore control group): 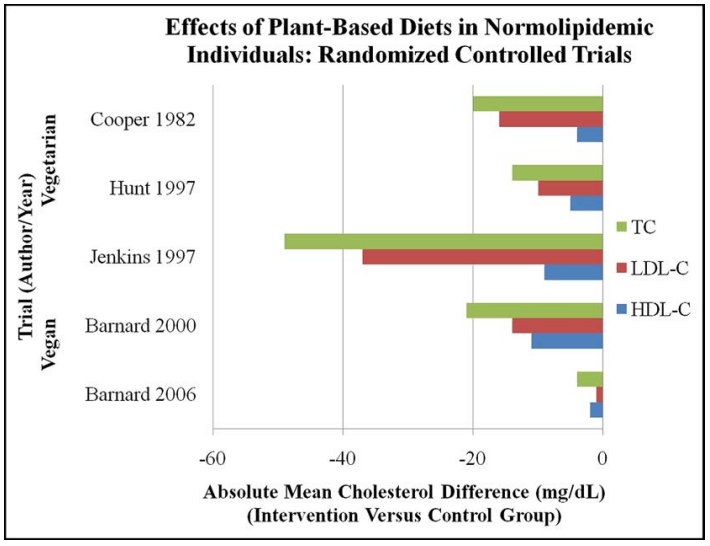 In other words, every single study of all lengths saw that switching from an omnivorous diet to a plant-based diet led to a decrease in total cholesterol, LDL, and HDL, which implies a decrease in triglycerides.

Switching to a vegan diet does appear to reliably decrease cholesterol and triglycerides in subjects.

Why Do Some Vegans Have High Triglyceride Levels?

There’s something you need to understand about those above studies.

The vegan diets in these studies are designed to be healthy. In other words, they’re not eating vegan junk food or tons of white bread and fake meats (e.g. Beyond Burgers), but instead whole foods like beans and vegetables.

For example, another study by one of those above authors (Jenkins) also found that putting people on a very high fiber vegan diet led to a decrease in all cholesterol markers (5).

There’s one more study that we need to look at to get a complete picture.

A vegan diet high in refined carbohydrates and junk food is unlikely to lower your triglycerides.

Summary: Will A Vegan Diet Lower Your Triglycerides?

There’s nothing magic about a vegan diet that automatically lowers your triglycerides.

The reason that most people see a decrease in triglycerides after going vegan is because they start eating more foods like legumes, vegetables, and even whole grains, which are all high fiber, low GI foods (i.e. slow digesting).

So if you just go vegan and replace all your meat with fake meats, and replace cookies with vegan cookies, it’s unlikely that you’ll see a significant change.

But if you work with a dietitian to plan a diet that focuses on whole plant foods, you should see an improvement. This process should be monitored by your doctor to make sure you’re not making any unhealthy changes, and to see if you’re seeing any benefits over time.