A vegan diet is a well known tool against autoimmune diseases because it generally lowers inflammation.

Since ulcerative colitis is an inflammatory bowel disease (IBD), it’s a reasonable thought that perhaps a vegan diet can help manage the symptoms of it as well.

While there’s not much published research on this specific topic, I did find some research that I’ll summarize for you here.

The Effect of a Plant-Based Diet on Ulcerative Colitis

As far as I’m aware, this is the only study published so far that looks at the effect of a plant-based (semi vegetarian diet, not vegan) on ulcerative colitis.

While that’s not exactly what we’re looking for, it still may provide some insights.

They provided patients with a mostly lacto-ovo vegetarian diet while in the hospital, and educated them on how to follow a similar diet outside the hospital.

There were a few big findings.

First, by the time most of the patients left the hospital, they had already seen significant improvements in symptoms. 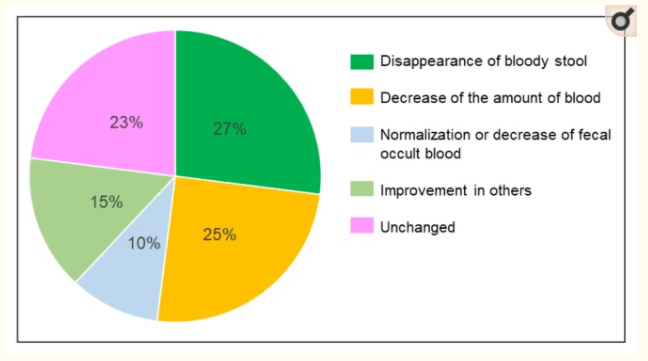 In total, 77% of patients had some sort of improvement, shown in the graph above.

On top of that, there were lasting effects that suggest treating ulcerative colitis patients with dietary education is more effective than just traditional medication (obviously this should be done with physician supervision):

What can we take from this?

Well, there are some obvious limitations. It’s a single study with largely self-reported data, so you can’t make too many definitive conclusions.

While more research is needed, it does appear that a plant-based diet is effective at managing ulcerative colitis for most chronic sufferers.

The plant-based diet in this study we looked at above included fish and even meat occasionally.

We can guess that a vegan diet would be even more effective, but until that’s actually studied, we have no evidence behind it.

Unfortunately there’s not much more we can say. I’ll update this page if and when more research on vegan diets and ulcerative colitis come out.

Without more research, it’s impossible to say if a vegan diet would be more or less effective than a plant-based (vegetarian) diet for ulcerative colitis.

Other Research on Plant-Based Diets and IBD

There’s one other research paper published in 2018 that looks at why a plant-based diet is a good recommendation for most cases of IBD (particularly ulcerative colitis and Crohn’s disease).

The main argument is as follows:

While the outcomes look very promising, there’s a lot of research to be done still to discover exactly why a plant-based diet is effective and to have more confidence in this conclusion.

The graph below compares remission rates of Crohn’s disease after being treated with different diets and medications. 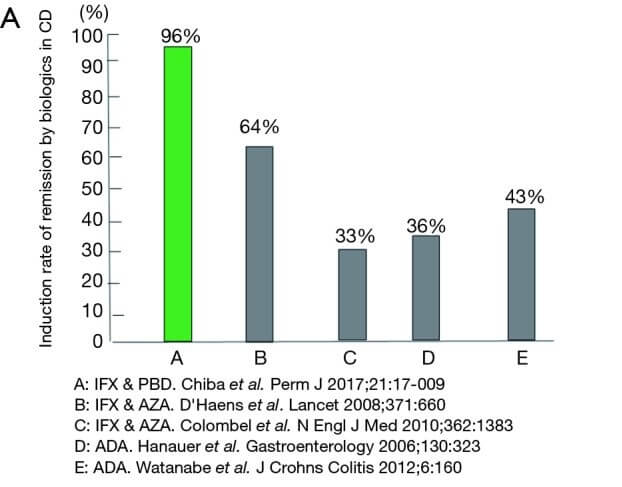 The first column is a combination of a plant-based diet and infliximab (medication), which achieved an amazing 96% remission rate.

There’s some evidence that a plant-based diet combined with medication can treat other diseases related to ulcerative colitis like IBD.