There’s a handful of common ingredients in the gum you usually buy that may or may not be vegan.

Those are all common ingredients in popular gums that you find in grocery stores, and there’s no way of knowing for sure from the label if those gums are vegan or not.

Personally, I prefer to buy gum that I’m positive is vegan.

I’ve spent quite a bit of time testing out different vegan gums, and while some of them are expensive and don’t last long, there are some good vegan gums. I’ll share my experiences with you here.

Are Any Gum Brands “Accidentally” Vegan?

I know, the easiest solution would be to find a popular gum that just happens to be vegan.

For most popular brands, there are a few accidentally vegan flavors, but you need to be careful, because most aren’t. In most cases, there’s a chance that a flavor is vegan, but it’s hard to be 100% sure.

If you’d rather go that route than pick a “real” vegan gum, I’ve done detailed write ups of which flavors probably are and aren’t vegan for:

I’ve ordered several vegan gums over the past few months, and there are a few things you need to know going into this.

First, they won’t be as good as Trident, or Dentyne, or other popular gums. The texture won’t be quite as good, and the flavor usually doesn’t last as long.

So measure your expectations to avoid being disappointed.

These 4 are the best gums (that all clearly state they are vegan on the package) that I’ve tried. They’re all pretty good, but I’ve listed them in order of my personal preference.

Simply Gum: Chewy Gum With a Chicle Base (Biodegradable) 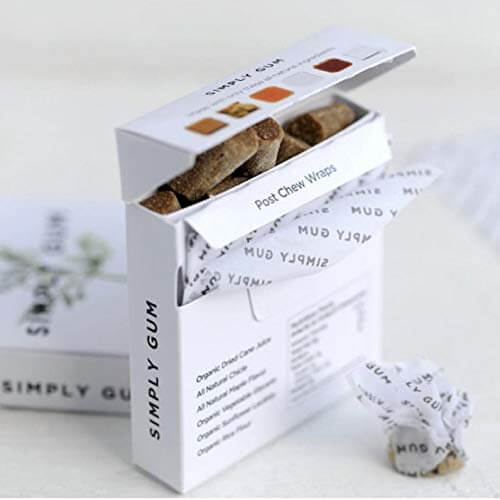 Simply Gum is my personal favorite, and the one that I’ll be ordering from now on. I haven’t found it in any local stores, but you can buy it in bulk on Amazon.

It’s the most expensive option here by a little bit (but they’re all in the same ballpark), it works out to about $0.16 per piece. I typically chew 2 at a time.

There are a few things that stand out about Simply Gum: 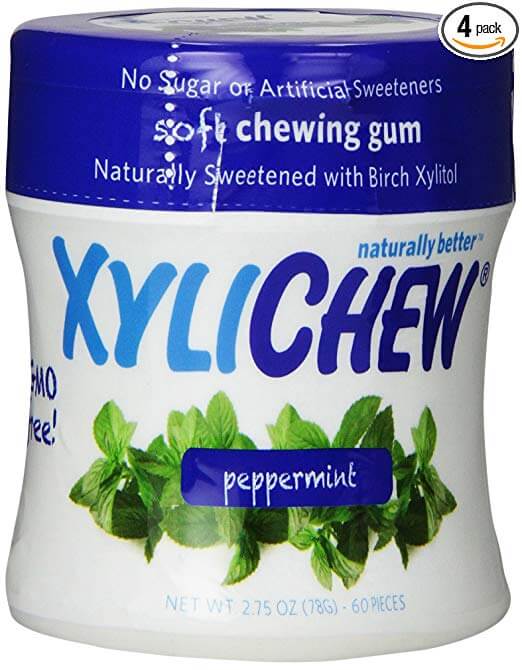 If you don’t have any issues with xylitol, Xylichew is the best vegan gum that’s flavored with it.

As studies have shown, xylitol has a beneficial effect on preventing cavities and improving oral flora. Ideally, it should be consumed on a regular basis, making gum a good vehicle for it.

The texture and flavorare relatively long-lasting. I enjoyed it for easily 20 minutes. Again, it’s still not going to be quite as good as something like Dentyne, but it’s not too far off. 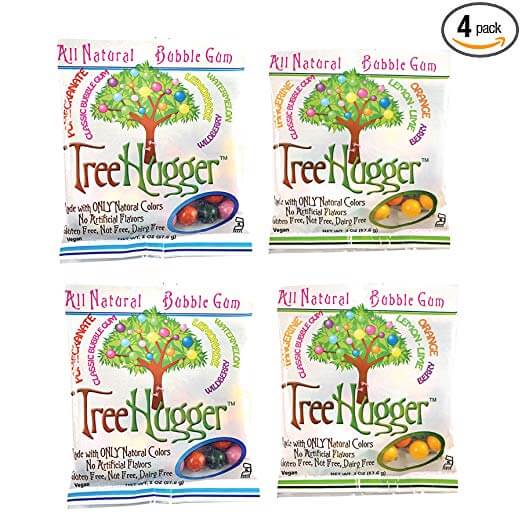 Miss gumballs? Then this is the gum for you.

Tree Hugger Gum comes as tiny gumballs and each piece is cheaper than the other 2 vegan gum brands we looked at above.

There’s no xylitol, as the gum is sweetened with a variety of sugars instead. Here are the sweetener ingredients from the package:

The gum base contains natural chicle, but that suggests to me that it’s still at least partly petroleum based. I couldn’t find a definitive answer on that.

As far as the flavor goes, it’s decent (how could it not be with sugar?). I’m not a huge fan of the texture, it was on the tough side and hard to chew after a bit. 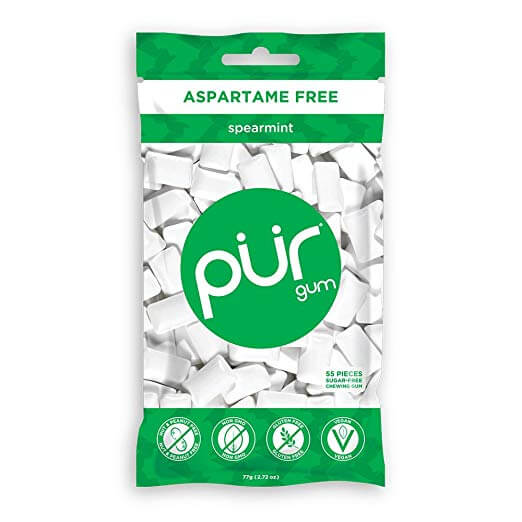 You can find PUR gum at Whole Foods and quite a few other grocery stores.

If I had no other options, it’s okay, but I’m not the biggest fan of it. The flavor seems to die out really fast (particularly the fruit flavors), I’d recommend trying the mint or cinnamon if you do end up going with PUR.

What’s good about it?

Which Vegan Gum is Best For You?

But for now, these 4 options are pretty good.

If flavor is most important to you, go with Simply Gum or Xylichew.

If you prefer gum balls, go with Tree Hugger Gum.

And if you just need some gum in a pinch while out shopping, PUR gum is a decent option.

Here’s a final summary table that may help you with your decision: